Modern Mechanix
Issue: May, 1930
Posted in: General
5 Comments on Science Presents Dumb Man With a Removable Voice (May, 1930)

Science Presents Dumb Man With a Removable Voice (May, 1930) 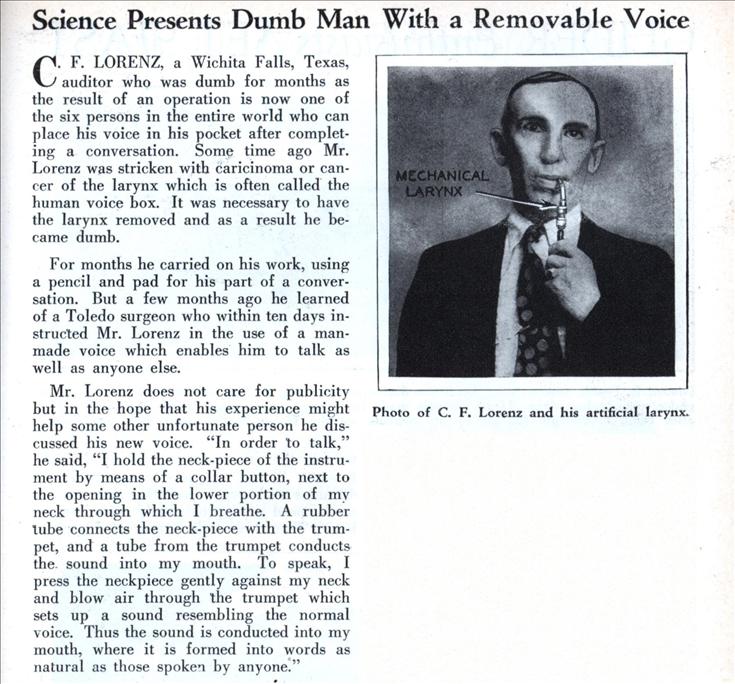 C. F. LORENZ, a Wichita Falls, Texas, auditor who was dumb for months as the result of an operation is now one of the six persons in the entire world who can place his voice in his pocket after completing a conversation. Some time ago Mr. Lorenz was stricken with caricinoma or cancer of the larynx which is often called the human voice box. It was necessary to have the larynx removed and as a result he became dumb.

For months he carried on his work, using a pencil and pad for his part of a conversation. But a few months ago he learned of a Toledo surgeon who within ten days instructed Mr. Lorenz in the use of a manmade voice which enables him to talk as well as anyone else.

Mr. Lorenz does not care for publicity but in the hope that his experience might help some other unfortunate person he discussed his new voice. “In order to talk,” he said, “I hold the neck-piece of the instrument by means of a collar button, next to the opening in the lower portion of my neck through which I breathe. A rubber tube connects the neck-piece with the trumpet, and a tube from the trumpet conducts the. sound into my mouth. To speak, I press the neckpiece gently against my neck and blow air through the trumpet which sets up a sound resembling the normal voice. Thus the sound is conducted into my mouth, where it is formed into words as natural as those spoken by anyone.”