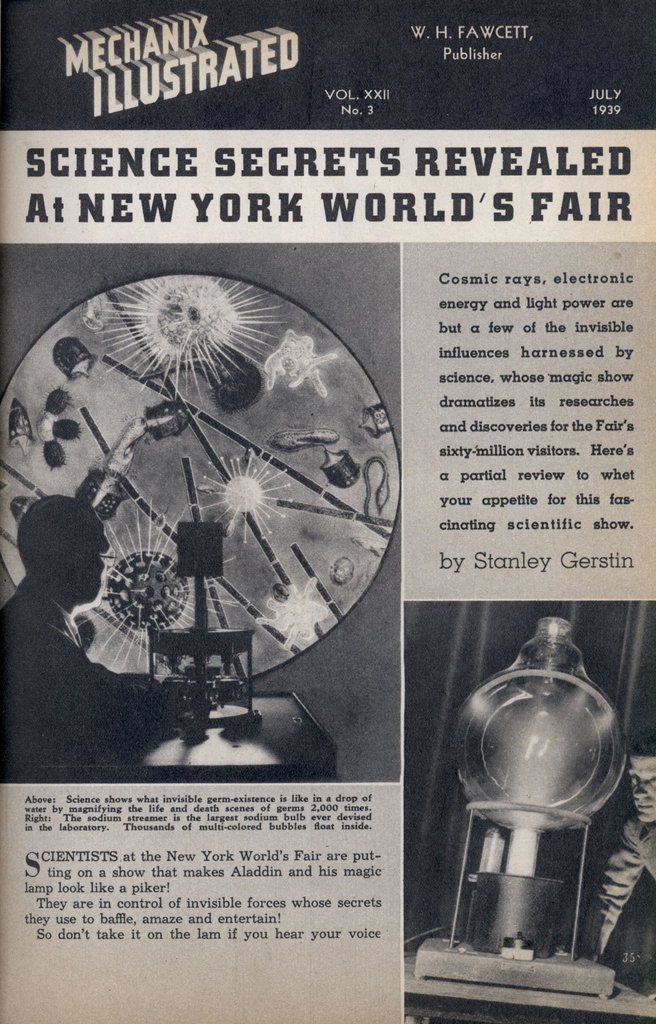 Cosmic rays, electronic energy and light power axe but a few of the invisible influences harnessed by science, whose magic show dramatizes its researches and discoveries for the Fair’s sixty-million visitors. Here’s a partial review to whet your appetite for this fascinating scientific show.

SCIENTISTS at the New York World’s Fair are putting on a show that makes Aladdin and his magic lamp look like a piker!

They are in control of invisible forces whose secrets they use to baffle, amaze and entertain! So don’t take it on the lam if you hear your voice come in the door and go out the window. And don’t see your eye doctor if you suddenly observe an electric fan reverse its motion and cut capers when mesmerized by a flickering light. For this is part of the showâ€”and the show will have only just begun. Shortly, a gigantic Frankenstein of aluminum, obeying the barked commands of its human director, will take over as a master of ceremonies in this fantastic temple of science.

Electronic energy, television, radio, X-ray, ultra-violet, shortwave, light powerâ€”these are but a few of the sources of invisible influences that are made to perform for you as the servants of science!

A few faint cosmic rays arriving upon the earth from distant reaches of interstellar space ring a bell and officially open the show. As you enter the awe-inspiring Hall of Man a low, rhythmic throbbing greets the ear. It comes from a giant 22-foot figure of a man with a shining blood-red heart illuminated in his breast. The mechanism of the heart simulates that of humans which makes three billion beats without a halt (you hope) in a 75-year lifetime.

A “pain-man,” a life-size reproduction of the torso, is marked with buttons on the 12 spots where pain occurs most frequently. A visitor pushes a button and a glass chart lights up showing the probable cause of pain in that region. Visitors walk into a giant replica of the human eye and look out of the pupil at the worldâ€”as the near sighted, far-sighted and color-blind see it. The visitor’s lung capacity is measured by the spirometers; his muscular strength and fatigue by ergo-graphs; the bony structure of the hand by fluoroscope. There is even a life expectancy machineâ€”which is as near as you may want to get to looking your fate in the face. The famous Lindbergh-Carrel heart is on display and an operation will be performed on life-size breathing dummies so that you can watch what happens (or would happen) to you when you take an anesthetic for an operation.

Now step into General Electric’s “house of magic,” where you will be initiated into the mysteries of the fluorescent stroboscope, which changes color and pattern as it revolves at high speed. The stroboscope is a phosphorescent-coated disc whose pattern changes according to the speed of a flickering light directed upon it. Equally amazing is the inducto therm (sometimes known as the fever machine). This machine enables a person to light a bulb in the hand simply by forming a loop with the arms. What actually happens is that a radio wave transmitted from the inducto machine induces an electric current to flow through a tuning loop formed by the arms, and the current thus flowing through the body lights the bulb. Science has discovered that the inducto therm is invaluable in giving people radio wave treatments for arthritis, and other ailments.

From the inducto therm, the scientist turns to the sodium streamer (illustrated on the cover) for a display of colorful gas bubbles induced simply by charging the argon atmosphere in the huge sodium bulb with electricity. This is the “Sally Rand” exhibit of the show, except that when the bubbles burstâ€”others take their place! What actually happens is that the electric charge turns the gas into a golden boiling mass, in the neck of the- bulb, which shoots up a shower of colorful gas bubbles. As they strike the top of the bulb, they spread out fan-likeâ€”and burst. But a constant shower of new bubbles of every color in the rainbow take their place. This sodium bulb is the largest ever made and its life is unpredictable.

Maybe you think it is easy enough to perform scientific wonders with the aid of electricity, but science shows that it has harnessed the power of ordinary light itself to drive a mechanical engine. This trick is achieved with the aid of the sun machine. By concentrating light upon a group of photo-electric cells, energy is set up, which when transmitted by wires to a small dynamo, drives a flywheel and shaft. Scientists don’t like to commit themselves on the possibilities of using power from light alone, or from the sun, but laboratory experiments now being carried on indicate that sun-power will someday be made to supply light and power to homes and industry. Spectators who see this exhibit and get fantastic ideas about using sun-power to wash the dishes, cook their meals and drive their automobiles will not be far wrong.

As a matter of fact, autos, airplanes and trains are already being driven by remote control, so if you see a small train cavorting up and down the tracks to the commands of a human voiceâ€”blame it on the scientists and not on your eyes. The train is controlled by radio and what happens is that human sounds are transmitted by a radio control unit as a series of signals which automatically set the train in motion or stop it. The principle is somewhat the same as that used in controlling the mechanical man which will be described later. When a speaker says “Go Back,” sharply, two clicks are heard in the controlling machinery. These two clicks automatically set the controls in motion for reversing the direction of the train. In similar manner the train is made to move forward, to stop and start, etc., depending on the predetermined number of emphasized syllables spoken by the attendant in ordinary speech.

At Westinghouse’s “world -of- scientific-wonder” you are stopped by a 120-foot “singing tower of light.” This strange structure is like an inverted cone and is formed of six concentric metal rings. The rings are separated by tubular rods with insulators symbolic of the electrical industry. They are connected to the tower face which contains circuits of red, green, and blue lights.

The tower sings! In operation, automatic valves control a series of water spouts which climb in varying heights up to 75 feet, rising and falling to the impulse of an unseen electrical master. As the lights dance, and the water spouts upward to a musical accompaniment, a cloud of smoke gradually rises toward the rim and the entire tower is enveloped in a many-colored mist.

He has 26 tricks in his repertoire and looks like Frankenstein Karloff. He is operated by 48 electrical relays (circuits actuated by current variations in other circuits) which operate his 11 motors by remote control. He walks with a peculiar limp, as only one leg bends. In spite of this infirmity he is probably the most educated robot alive.

He converts the sound vibrations of prearranged commands into electrical impulses, as a telephone does, and these impulses set him in motion. He is quite indifferent to what words are used. The number and spacing of syllables are what he pays attention to. If vocal impulses in the wording of a command are not delivered just right, Elektro may disobey orders, too. During a laboratory demonstration his mechanism became rambunctious and instead of saluting as he was commanded, he began walking backwards. He continued backwards oblivious of the commands of the demonstrator whose words became a jumble in the excitement. The coupe de grace was delivered by Westinghouse-Engineer J. M. Barnett who shut off the electric current supplying the robot with power. And just in timeâ€”or Elektro might have gone on backwards right through the wall!

Nearby, on huge screens, a virtual 12-ring circus is in constant performance in which queer animals one-thousandth of an inch long are magnified to the size of jack rabbits. The performers are microscopic organisms whose world is a drop of water. The ring master is Dr. George Roemmert who calls his strange scientific invention the microvivarium.

The microvivarium is a jitterbug realm, ordinarily invisible, in which strange bits of animal life spend their time spinning around on their noses. Here visitors may watch the beating hearts of transparent water fleas and see unborn babies stirring in their brood pouch. The machine that reveals them magnifies their size two thousand
times.

Dr. Roemmert’s microbes are not exactly pets but he cares for them as if they were so many Park Avenue poodles. Their temperature and food must be regulated carefully and the water in which they perform must be specially prepared. The ring master brews a kind of tea with hay. He drops in a tidbit of decayed plant material and the microbe acrobats, clowns and daredevils start their gyrations.

Like the circus clown, they are carefully made up. A transparent animalicule, for instance, is fed a red dye just before he goes on with his act. The observer is thus enabled to see his digestive appartus in action. The drama of life in this microbe world is as carefully staged as a Broadway hit. A slow-moving scene opens the first act. Nice little bugs are shown having a picnic. Then the big, bad wolf comes stalking, swishing its tail, puffing itself up and bent on destruction. A terrific, devastating death battle results which is real and thrilling. You forget that the contestants are invisible to the unaided eye.

If seeing is believing, you will have to trust your eyes and ears when two ordinary flashlights make their appearance as virtuosos of the marimba! A technician points the lights at a marimba and the instrument beats out a tune that marks the dawn of a new day in swing music. “Marimba” is the name of a 3-1/2-octave instrument equipped with photo-electric cells and grid tubes. The flashlights provide the lighting to activate the photo cells. The ordinary hand action of striking the resonant bars with a hammer is

simulated by electrically driven hammers which vibrate when light strikes the electric eyes. The marimba is played from a distance of 15 feet but scientists estimate that by optical refinements and application of the principle of light-beam relays, the instrument could be played at distances up to 300 to 400 feet.

And just to retain you in that illusionary world of magic when you leave the marvelous halls of science, engineers have devised a spectacular lighting demonstration for the perisphere that simulates a floating planet. The effect devised shows the perisphere wreathed in clouds and deep in etheral blue light whirling through space.

The peculiar blue light and whirling clouds over the surface of the perisphere are created by 340 lighting projectors placed on roofs of nearby buildings. Six cloud projectors will help convey the idea of inter-planetary space. A special control system makes possible smooth change of colors and shifting of clouds.

These are but a few of the wonders of science designed to entertain you at the Fair, where science has directed its skill toward dramatizing its research and discoveries.