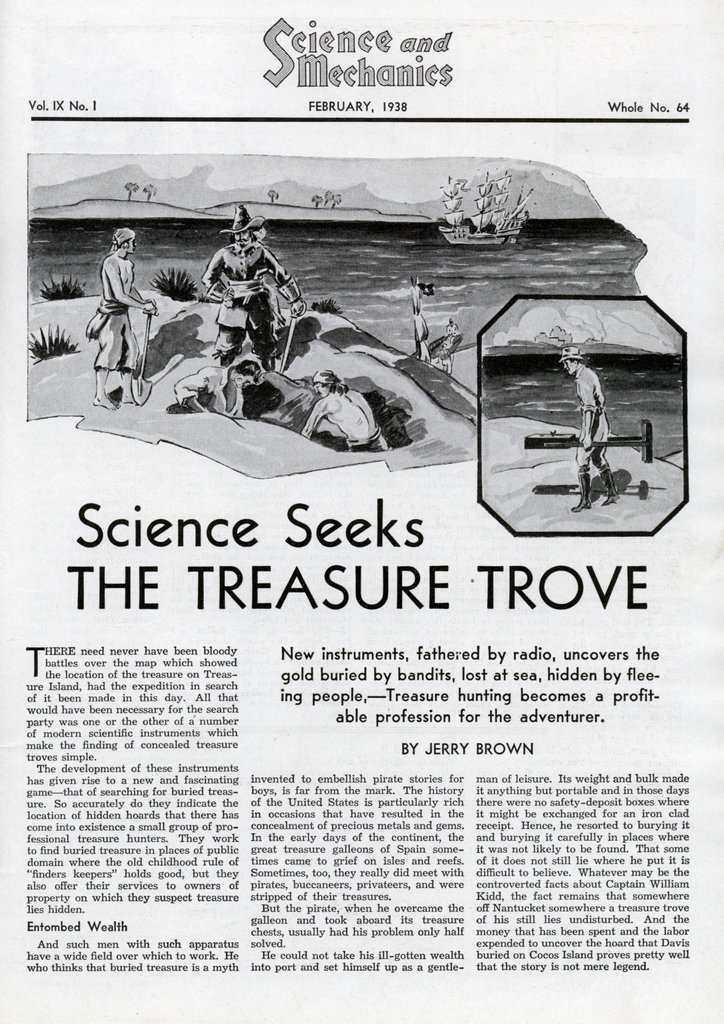 New instruments, fathered by radio, uncovers the gold buried by bandits, lost at sea, hidden by fleeing people,â€”Treasure hunting becomes a profitable profession for the adventurer.

THERE need never have been bloody battles over the map which showed the location of the treasure on Treasure Island, had the expedition in search of it been made in this day. All that would have been necessary for the search party was one or the other of a number of modern scientific instruments which make the finding of concealed treasure troves simple.

The development of these instruments has given rise to a new and fascinating gameâ€”that of searching for buried treasure. So accurately do they indicate the location of hidden hoards that there has come into existence a small group of professional treasure hunters. They work to find buried treasure in places of public domain where the old childhood rule of “finders keepers” holds good, but they also offer their services to owners of property on which they suspect treasure lies hidden.

And such men with such apparatus have a wide field over which to work. He who thinks that buried treasure is a myth invented to embellish pirate stories for boys, is far from the mark. The history of the United States is particularly rich in occasions that have resulted in the concealment of precious metals and gems. In the early days of the continent, the great treasure galleons of Spain sometimes came to grief on isles and reefs. Sometimes, too, they really did meet with pirates, buccaneers, privateers, and were stripped of their treasures.

But the pirate, when he overcame the galleon and took aboard its treasure chests, usually had his problem only half solved. He could not take his ill-gotten wealth into port and set himself up as a gentleman of leisure. Its weight and bulk made it anything but portable and in those days there were no safety-deposit boxes where it might be exchanged for an iron clad receipt. Hence, he resorted to burying it and burying it carefully in places where it was not likely to be found. That some of it does not still lie where he put it is difficult to believe. Whatever may be the controverted facts about Captain William Kidd, the fact remains that somewhere off Nantucket somewhere a treasure trove of his still lies undisturbed. And the money that has been spent and the labor expended to uncover the hoard that Davis buried on Cocos Island proves pretty well that the story is not mere legend.

And on the Land

So much for brials at sea and on distant islands. The mainland of our country, however, is also salted with such buried treasures. It has been estimated that the gold and silver so lost exceeds that in circulation. That may be an exaggeration. But no one doubts that there is plenty of it. Enough has been discovered to indicate that there is much more.

The Civil War, it is said, brought about the greatest concealment of personal treasures in the history of the world. The bad men of the early west, tucked their takings away in places that have never since been found. Frank James, for instance, one of the notorious James brothers, tried to find in later years, a considerable store of money hidden thirty years earlier, only to find a town built on the site of the cache.

Local catastrophes, such as floods and fires always result in attempts to save precious belongings by burying them. After the Chicago fire, many a sad, returning householder was unable to unearth in his garden, or behind a ruined cellar wall, the family cash and jewels, because he could not locate the spot. Others never returned, and the treasures lie hidden still.

All this is incidental to the really great treasure cashes that have been authenticated by research and that still lie for the modern treasure hunter to find. The principal ones are listed in the table accompanying article. The map gives the probable locations of the treasures.

How to Find It

With the advent of radio and the better understanding of radio waves, accurate instruments for locating buried metal have been developed. Their method of operation has been described as similar to that of a searchlight picking out an object in the dark. The light rays are simply swept over an area, and when they encounter the object sought, they bring it into view.

Just so with the instruments for locating buried metal. The ray, however, is a radio wave instead of a light ray. A typical set of apparatus consists of a small radion transmitter and a radio receiver attached to the ends of a longitudinal framework, but not connected together in any way. Each has its own antenna, self-enclosed. Radio waves are projected into the ground by the transmitter and when they encounter metal they set up secondary waves that can be heard through the receiver in earphones and may be indicated on dials on the receiver.

Any metal that is an electrical conductor may me so detected. Its extent may be determined by the area over which the signal comes in, its volume by the volume of the signal.

Treasures are usually buried in metal cases. That makes them easier to detect. But even when they are buried in wooden boxes, dampness usually attacks the wood and sets up a “core” of electrical activity when the waves from the portable transmitter strike on it. Such instruments have emerged from the experimental stage. Really worthwhile discoveries have been made with them. In one instance buried and forgotten smelteries together with quantities of gold and silver were discovered on the grounds of a ruined Southwestern mission. In another, a $10,000 horde of paper currency, buried in an iron pot long ago by bandits, was uncovered.

A New Aid to Science

There can be no question but that science has put into the hands of man a new instrument that will, eventually, take from the bowels of the soil the treasures that have long lain hidden there so that they may again be put to use for man’s enjoyment, profit and advancement.