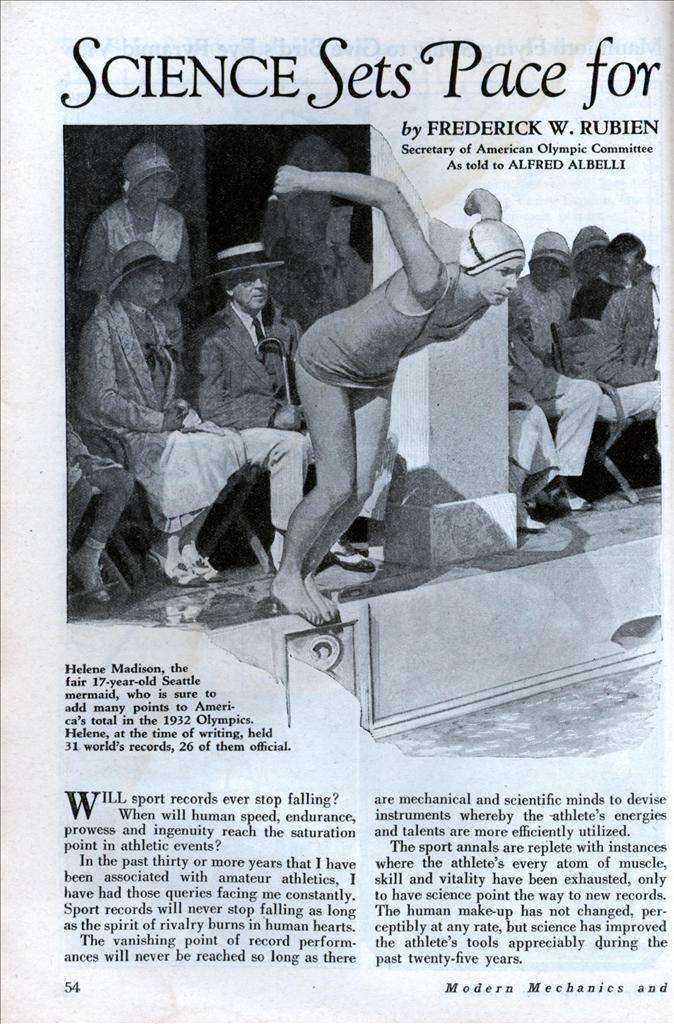 Athletic sports are no longer merely a purely physical matter, for science and inventive ingenuity each year bring forth new equipment which enables the trained athlete to clip seconds or add inches to the world’s records in all events, until now it is a rare athletic meet when one or more records fail to fall.

Secretary of American Olympic Committee – As told to ALFRED ALBELLI

WILL sport records ever stop falling? When will human speed, endurance, prowess and ingenuity reach the saturation point in athletic events?

In the past thirty or more years that I have been associated with amateur athletics, I have had those queries facing me constantly. Sport records will never stop falling as long as the spirit of rivalry burns in human hearts.

The vanishing point of record performances will never be reached so long as there are mechanical and scientific minds to devise instruments whereby the -athlete’s energies and talents are more efficiently utilized.

The sport annals are replete with instances where the athlete’s every atom of muscle, skill and vitality have been exhausted, only to have science point the way to new records. The human make-up has not changed, perceptibly at any rate, but science has improved the athlete’s tools appreciably during the past twenty-five years.

Only last February we saw a record which we supposed might have remained permanent go flitting into oblivion and a new one set up by an obscure dark horse in the indoor high jump event at the Millrose Games in Madison Square Garden.

George Spitz, 19 years old and just out of high school, to the amazement of 15,000 spectators, came out of nowhere and sailed gracefully over a thin and untrembling bar poised 6 feet 7 inches above the take-off. His feat became the world’s record, surpassing the mark of Harold Osborn, the college professor-athlete, who hung up a record of 6 feet 6-1/4 inches back in 1925.

The performance of Spitz is not an isolated one. Hardly a big athletic meet passes these days without some record being annihilated. I happen to know that the remarkable performance of Spitz resulted not only from the wonderful training he underwent, but also from his use of mechanical aids to strengthen his body and muscles.

George Spitz uses two forms of equipment for his training, aside from his major instrument which is composed of the poles and the bar over which he lifts himself. He uses a specially-made gymnasium bicycle with a clock in front of it to register the amount of energy expended. That is for his legs. For his arms he concentrates on a piece of rowing apparatus. It is like the section of a rowing shell, with two oars.

This youth flaring suddenly and spectacularly out of the athletic firmament, promises to be America’s best bet at the 1932 Olympics to be held at Los Angeles from July 30 to August 14. The outdoor high-jump mark is 6 feet 8-1/4 inches, held by Harold Osborn, and although I am not given to predictions, I would not hesitate to say that Spitz could look that one straight in the eye without flinching. Perhaps another dark horse will appear in this event at the Olympics. With science setting the pace these days, there is no telling where a brilliant dark horse is hiding.

In the 1912 Olympics at Stockholm, Sweden, Ted Meredith won his place toward posterity by his victory in the 800 meters run. I can still recall vividly how he was tossed into that race as a sort of “work horse” for Mel Sheppard and Ira Davenport, shining luminaries of the day. Meredith wasn’t considered a winner by anyone.

To the great astonishment of the multitude, it was noticed that his more illustrious team-mates were being hard pressed. Suddenly, like a flash out of the blue, Ted Meredith spurted ahead to make a record of 1:51 9-10, which remained unassailed until 1928 when D. G. A. Lowe of England clipped a tenth of a second off it.

Johnny Hayes was another famous dark horse. He fell into fame when he beat the celebrated Italian marathoner, Dorando, in the 1908 Olympics. There were at least twenty others in that noted marathon race who outshadowed Johnny Hayes. Some sporting gentleman even thought his entry was a foolhardy move. They said he didn’t have a ghost of a show.

But today I know of no more dazzling chapter in the annals of the revived Olympic Games. I cannot recall in all my years of affiliation with sports a more dramatic triumph than that scored by Hayes over Dorando. The Italian baker was the first to reach the stadium. But once on the track there, he collapsed. Several of his fiery countrymen helped him to his feet and hauled him across the finishing line.

In another second Hayes came dashing into the arena, fresh and peppery under his own steam. He finished strong, to the utter amazement of the bewildered spectators. Dorando was disqualified. Hayes was proclaimed the victor. Since that memorable triumph no other American has ever won that event. We are apt to be optimistic too easily in America, and yet I would not be totally surprised if a dark horse won the marathon for Uncle Sam.

The 26-mile marathons have lost favor with American runners since the days of Johnny Hayes. The gruelling grind does not appeal to our young athletes of the cinder path. Yet every now and then a runner steps out who promises to take the olive-branch in the marathon.

Clarence DeMar, the so-called grandpa of the marathon, whose native heath is Boston, will wind up two decades of foot-racing by taking part in the 1932 Olympic marathon event. Science cannot do much for the longdistance runner beyond the athlete’s natural attributes of speed and endurance. Mind and body work with faultless mechanical precision. Beyond the co-ordination of these two to their fullest capacity, mechanical aids or scientific treatment cannot go far in helping to set records. In the pole-vaulting event, science has come bountifully to the aid of the athlete. Not only is there an advantage in the use of a bamboo pole, but also in the matter of the take-off has the vaulter gained advantage through scientific progress.

The ingenuity of sporting guides has improved the hammer throwing event from the crude days when a blacksmith’s 12-pound sledge-hammer was used, making a 78-foot throw at the best then, to the present mark of over 180 feet. In the coming Olympics a 16-pound hammer will be used, with a head consisting of a lead or brass shell filled with lead or cast-gray iron and spherical in shape. The handle will be of spring steel wire, and the grip may be either of a single or double loop construction.

Frank Connor of the New York A. C. looks as if he might monopolize the honors in that event, although Matt McGrath, four times an American Olympic team member and now a deputy police inspector in New York, threatens to appear at Los Angeles next summer. His Olympic record hurl of 180 feet 2 inches still stands. Matt McGrath is 53. Using the modern hammer, he may set new records.

In the sprints and middle distance events I can confidently state that it will be science at the starter’s pistol in the Olympic Stadium at Los Angeles. We are planning to give the runners the best starts science has been able to devise in these events. The holes will be firm, the surface around them will be solid and substantial. A start may possess that split second which may mean a new record and victory. That goes for the hurdles as well.