Often when my spell checker picks a word out, it’s not that it’s spelled wrong, just that the spelling has changed over time. So, while checking this article about making machines my interest was certainly piqued when I came across Dr Sykes’ predilection for all sorts of weird “urgies”. Alas, it was just a suffix. And yes, I have a dirty mind. 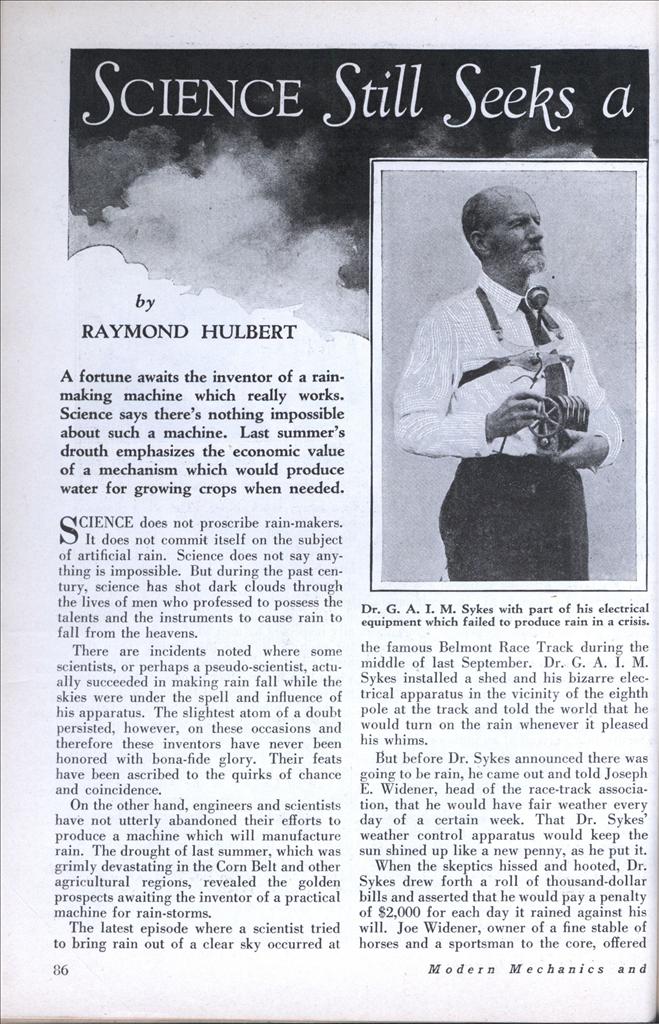 by RAYMOND HULBERT
A fortune awaits the inventor of a rain-making machine which really works. Science says there’s nothing impossible about such a machine. Last summer’s drouth emphasizes the economic value of a mechanism which would produce water for growing crops when needed.

SCIENCE does not proscribe rain-makers. It does not commit itself on the subject of artificial rain. Science does not say anything is impossible. But during the past century, science has shot dark clouds through the lives of men who professed to possess the talents and the instruments to cause rain to fall from the heavens.

There are incidents noted where some scientists, or perhaps a pseudo-scientist, actually succeeded in making rain fall while the skies were under the spell and influence of his apparatus. The slightest atom of a doubt persisted, however, on these occasions and therefore these inventors have never been honored with bona-fide glory. Their feats have been ascribed to the quirks of chance and coincidence.

On the other hand, engineers and scientists have not utterly abandoned their efforts to produce a machine which will manufacture rain. The drought of last summer, which was grimly devastating in the Corn Belt and other agricultural regions, revealed the golden prospects awaiting the inventor of a practical machine for rain-storms.

The latest episode where a scientist tried to bring rain out of a clear sky occurred at the famous Belmont Race Track during the middle of last September. Dr. G. A. I. M. Sykes installed a shed and his bizarre electrical apparatus in the vicinity of the eighth pole at the track and told the world that he would turn on the rain whenever it pleased his whims.

But before Dr. Sykes announced there was going to be rain, he came out and told Joseph E. Widener, head of the race-track association, that he would have fair weather every day of a certain week. That Dr. Sykes’ weather control apparatus would keep the sun shined up like a new penny, as he put it.

When the skeptics hissed and hooted, Dr. Sykes drew forth a roll of thousand-dollar bills and asserted that he would pay a penalty of $2,000 for each day it rained against his will. Joe Widener, owner of a fine stable of horses and a sportsman to the core, offered the artificial weatherman $1,000 for each day of fine weather and $2,500 each for two perfect Saturdays.

In making this bargain, Widener recalled the lamentable circumstances of June 8 at the Belmont track when 25,000 spectators were uncomfortably and dangerously huddled in the grandstand while the rain poured down during the Belmont Stakes event. Dr. Sykes took the order and went out to work for sunshine.

Dr. Sykes gave them sunshine for every day except one of that week, tucking away $8,000 in his jeans on Saturday. That’s the fair side of the story, but it so happened that a sprinkle sneaked through the ozone on the final Saturday, which was the Futurity Day and one which the Widener coterie particularly wanted resplendent with sunshine. Anyway, Dr. Sykes had the consummate satisfaction of saying he found a way to beat the horses. But, as has already been indicated, there were squawkers and doubting Thomases who sent up a yelp that statistics for five years showed that the month of September had an average of nine days of rain over that period, that Dr. Sykes was no scientist or magician. He was just a lucky devil, as they expressed it.

Dr. Sykes graciously accepted the challenge of these scoffers and announced that it would rain at Belmont Park between the hours of two and four on Monday, September 15. His solemn pronouncement struck a weird feeling into his listeners, not unlike the sensation that Indian tribesmen must have felt when the Medicine Man, pointing an ominous finger skyward, mumbled that rain would fall at his command.

At any rate, Dr. Sykes got out to Belmont Park bright and early that morning with his corps of assistants. He set up his apparatus which he explained worked through thermomagnetic field impulses.

“I merely assemble rain-bearing clouds over a specified area,” said Dr. Sykes, explaining his intricate rain machine, “and then I turn my engines on them. The earth’s magnetic field fairly eats out of my hand.”

Dr. Sykes soared into a profound discussion on dynurgy, xurgy, psychurgy, freenurgy, chemurgy, themurgy and several other “urgies” not in the dictionary, but since these “urgies” do not promise to become an integral part of science, they might be discarded without injury to either Dr. Sykes or science.

Added to this grotesque composition was a vase, which might have been used in the old days as a container for flowers in a steam – driven automobile. Dr. Sykes explained that this was his sun accumulator. Then there was a small airplane propeller attached to some mechanism which he said serves as wind distributor. Homely, improvised apparatus, but Dr. Sykes had an explanation for every molecule of metal there.

At a little distance from this machinery was the five-sided shed, decked out with additional aerials. Inside was a French telephone circuit which represented the negative end of the works when the other extreme was positive, and vice versa. On the wall of the shed was a map showing the magnetic inclination or the so-called “dip” for the particular vicinity. This section was in the 72d degree of magnetic powers.

– Came Monday afternoon. Two p. m. A goodly crowd was there. Dr. Sykes appeared in a full bloom of confidence. He held a hand electric generator whose function he refused to explain under these particular circumstances. Three p. m. The sun revelled high and bright in heaven.

Four p. m. Dr. Sykes mounted a platform and looked mournfully though hopefully toward the west. At four-thirty he turned to his assistant and muttered, “Into each life a little rain must fall.” By five o’clock it was plain that Dr. Sykes was facing failure. Not a single drop of rain, though there were stubborn clouds everywhere. By six o’clock, Dr. Sykes had mysteriously vanished. However, not without the high commendation of his admirers. Dr. Sykes had dared to pursue the courage of his convictions.

Perhaps one of the most ambitious attempts to produce rain was that of Prof. Wilber D. Bancroft, professor of physical chemistry at Cornell University, and L. Francis Warren, another scientist. Back in February, 1923, they tried to dispel clouds and fogs with electrically charged sand and at the same time they attempted to precipitate rain from massed vapor.

These two men obtained the co-operation of the Army Air Service and they carried on their experiments from airplanes over McCook Field, near Dayton, Ohio. They were hailed as pioneers and the end was envisioned of the London fog, as well as the fogs which endangered shipping on seaports of America and Europe.

It was their plan to fly 400 to 500 feet over the clouds. The plane would discharge the electrified sand above the tops of the clouds, enlarging the drops, coalescing them or causing uncharged drops to evaporate, thereby compelling the larger drops to descend in rainfall. Mr. Warren maintained at the time that they actually dispelled clouds in ten minutes. However, in cases of drought where there were no clouds, the problem might be beyond their reach or control, they said.

A special apparatus had been attached to the airplane which could discharge 30,000 to 40,000 volts. The plane carried eighty pounds of sand of 150 mesh. It had a wind-driven generator and electric equipment capable of discharging sand charged either positively or negatively, according to the will of the operator. The plane went at 100 miles an hour over the specific cloud region. Little of rain-making value developed out of these experiments.

Still later, aviators tried to break a drought in Hongkong, China, by dropping powdered kaolin in the clouds, thereby hoping to precipitate rain. But their efforts were futile.

During the latter part of the last century it was generally believed that fires might bring down rain. James Espy, a meteorologist of Pennsylvania, was the greatest exponent of this theory. But this idea also went up in thin air.

Other notions were that explosions and concussions could produce showers. But the World war, with all the heavy artillery explosions, and a couple of volcano eruptions have discredited the concussion theory for making rain-drops.

Back in 1891, a Chicagoan named Gathman shot a stream of carbolic acid 600 feet into the air. He maintained that clouds formed as a result and rain was subsequently produced. But then again, there is no positive record of his accomplishment. Besides, carbolic acid offers no allurements in this field for practical purposes.

In 1893, a Frenchman named Baudouin, was supposed to have caused rain by establishing an electrical contact with clouds through the medium of a kite. He said it worked twice in Algeria. By removing the kite he stopped the rain, he said. But that was so long ago no one remembers whether it did rain in Algeria on that particular day.

But getting down to a constructive viewpoint, C. F. Marvin, chief of the United States Weather Bureau, has manifested a deep interest in all attempts to make rain. There is no disputing the fact that a successful machine would be priceless, that its inventor would go down not only as one of mankind’s greatest benefactors but also one of the most celebrated engineers.

So intrigued was the weather bureau at Washington that two officials were on hand during Dr. Sykes’ demonstration at Belmont Park. The field is open, they said. One of them expressed the opinion that many a cellar may harbor the discarded apparatus which might have served the purpose if only brought out into the open and developed. There is no limit to the possibilities of an apparatus which can do away with drought and the rain-check.