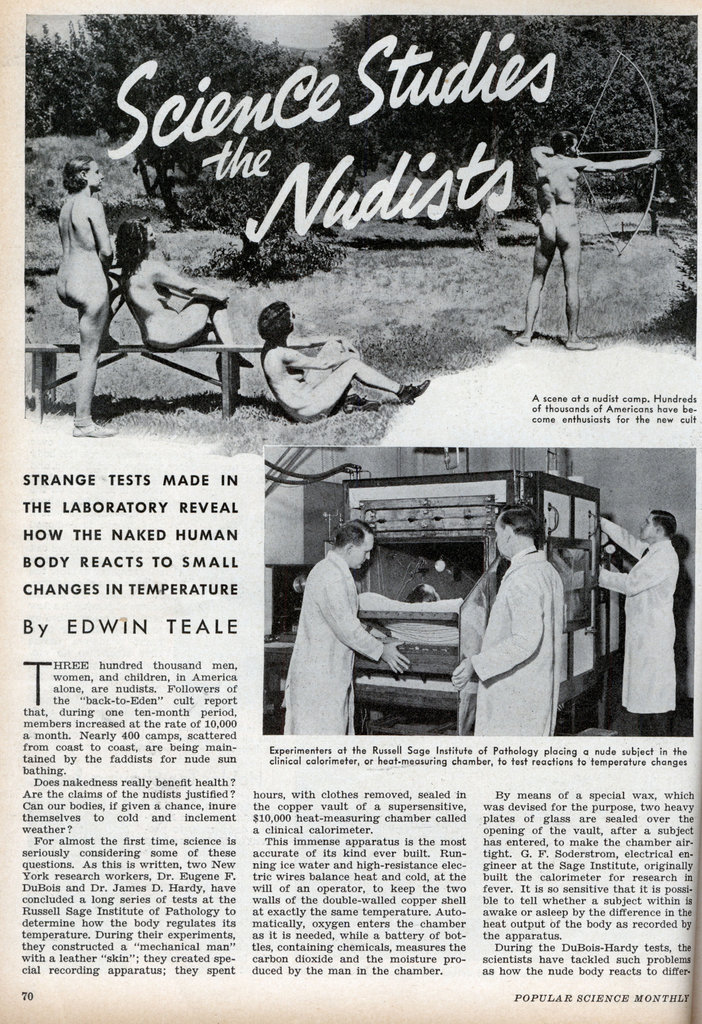 THREE hundred thousand men, women, and children, in America alone, are nudists. Followers of the “back-to-Eden” cult report that, during one ten-month period, members increased at the rate of 10,000 a month. Nearly 400 camps, scattered from coast to coast, are being maintained by the faddists for nude sun bathing.

Does nakedness really benefit health? Are the claims of the nudists justified? Can our bodies, if given a chance, inure themselves to cold and inclement weather?

For almost the first time, science is seriously considering some of these questions. As this is written, two New York research workers, Dr. Eugene F. DuBois and Dr. James D. Hardy, have concluded a long series of tests at the Russell Sage Institute of Pathology to determine how the body regulates its temperature. During their experiments, they constructed a “mechanical man” with a leather “skin”; they created special recording apparatus; they spent hours, with clothes removed, sealed in the copper vault of a supersensitive, $10,000 heat-measuring chamber called a clinical calorimeter.

This immense apparatus is the most accurate of its kind ever built. Running ice water and high-resistance electric wires balance heat and cold, at the will of an operator, to keep the two walls of the double-walled copper shell at exactly the same temperature. Automatically, oxygen enters the chamber as it is needed, while a battery of bottles, containing chemicals, measures the carbon dioxide and the moisture produced by the man in the chamber.

By means of a special wax, which was devised for the purpose, two heavy plates of glass are sealed over the opening of the vault, after a subject has entered, to make the chamber airtight. G. F. Soderstrom, electrical engineer at the Sage Institute, originally built the calorimeter for research in fever. It is so sensitive that it is possible to tell whether a subject within is awake or asleep by the difference in the heat output of the body as recorded by the apparatus.

During the DuBois-Hardy tests, the scientists have tackled such problems as how the nude body reacts to different temperatures, how efficient human flesh is as an insulating medium, when shivering begins, and whether a fat man can withstand cold better than a thin one. They remained nude in the sealed chamber of the calorimeter at temperatures that ranged from ninety-six to seventy-two degrees Fahrenheit. In some tests, they were clothed in wool and cotton ski suits; in others, subjects slept all night sealed in the copper vault.

The result is an accumulation of data which gives us a scientific basis for judging some of the claims of nudism. Human flesh, the experimenters report, is as efficient as an insulating medium against cold as is paper, leather, asbestos, or cork. However, there is only a small difference between fat and thin persons in their ability to withstand cold for long periods. Incidentally, the tests show that a quiet subject, without the protection of clothing, will begin to shiver at a surprisingly high temperature, eighty-three degrees, approximately ten degrees higher than the average room temperature in a furnace-heated home. This trembling is nature’s method of producing extra heat through muscular activity. Athletes, exerting themselves to the limit, sometimes raise their body temperatures to 103 degrees. Goose pimples, produced by cold, are of no value in keeping the body warm. They are simply vestiges remaining from a prehistoric time when man was covered with hair.

Only within a small range above eighty-three degrees Fahrenheit, is the naked body fitted to meet variations in temperature without considerable mus- cular activity. The experimenters have listed three “zones” within each of which the body functions in a different manner.

At the top is the “warm zone,” above eighty-six degrees. Blood flows to the skin, which radiates away the heat. Sweating aids in the elimination of excess internal warmth. In the middle is the so-called “comfort zone,” between eighty-three and eighty-six degrees. Here the body acts like an automatic thermostat. If the, temperature rises, more blood flows to the skin and more heat is eliminated; if the temperature goes down, the blood supply to the skin is reduced and the body heat conserved. At the bottom is the “cold zone,” below eighty-three degrees. Because the blood supply to the skin is throttled down to a minimum by the time the upper limits of this zone are reached, the body can do little to halt the increasing loss of heat. The extra warmth generated by shivering may raise the temperature of the body half a degree, but this heat is soon dissipated.

No amount of nudist “hardening” by exposing the body to sun and air and cold, the researches show, can make it immune to the evil effects of shifting temperatures. Without the protection of clothing, the motionless human system is constitutionally unfitted to cope with cold. Only in lands where the temperature never drops below eighty-three degrees, can nudists live in comfort.

OTHER tests made at the Russell Sage laboratory reveal that our skins are amazingly sensitive to temperature changes. In some cases, the human skin can detect changes as small as one one-thousandth of a degree. Only electric thermometers are more delicate. We are about twice as sensitive to heat as to cold.

Another discovery about skin enabled Dr. Hardy to devise a curious “mechanical man” for use in the calorimeter tests. This was the fact that, as a heat-radiating medium, skin is as efficient as black paint. The scientist produced a metal tank approximately the shape and size of a human torso. This he painted black. After it was filled with water, he sealed it up with two electric lamps inside to warm the fluid and a small, electrically spun propeller to keep the water in motion. Placed in the calorimeter, the “mechanical man” radiated heat at approximately the same rate, for each square inch of surface area, as a normal human body. It made long-range tests easy, and relieved the scientists of the monotony of long hours in the vault.

By attaching a strip of moist, tan-colored leather to the side of the tank, Dr. Hardy produced an artificial “skin” which has sweating characteristics almost identical with those of human skin.

Other interesting bits of information about the reaction of our bodies to the rise and fall of the thermometer have been announced in recent months, aiding science in its appraisal of nudism. For example, when we are excited or nervous or afraid, experimenters have found, we literally get cold feet. Delicate electric thermometers show that our feet, hands, and noses are colder than the rest of our bodies.

AGAIN, a rise of only three degrees in temperature, at one point in the scale, increases sweating fifty percent. In a room where the temperature drops from seventy-eight degrees to fifty-eight degrees, a nude person loses twice as much heat at the lower figure as at the upper.

Not long ago, a back-to-nature faddist predicted that eventually a man wearing clothes on Fifth Avenue, in New York City, will attract as much attention as a man without clothes would today. The thorough tests of Dr. DuBois and Dr. Hardy, however, indicate that the prediction will never be fulfilled. For physical reasons, if for no others, man seems destined to continue as the animal that wears clothes.