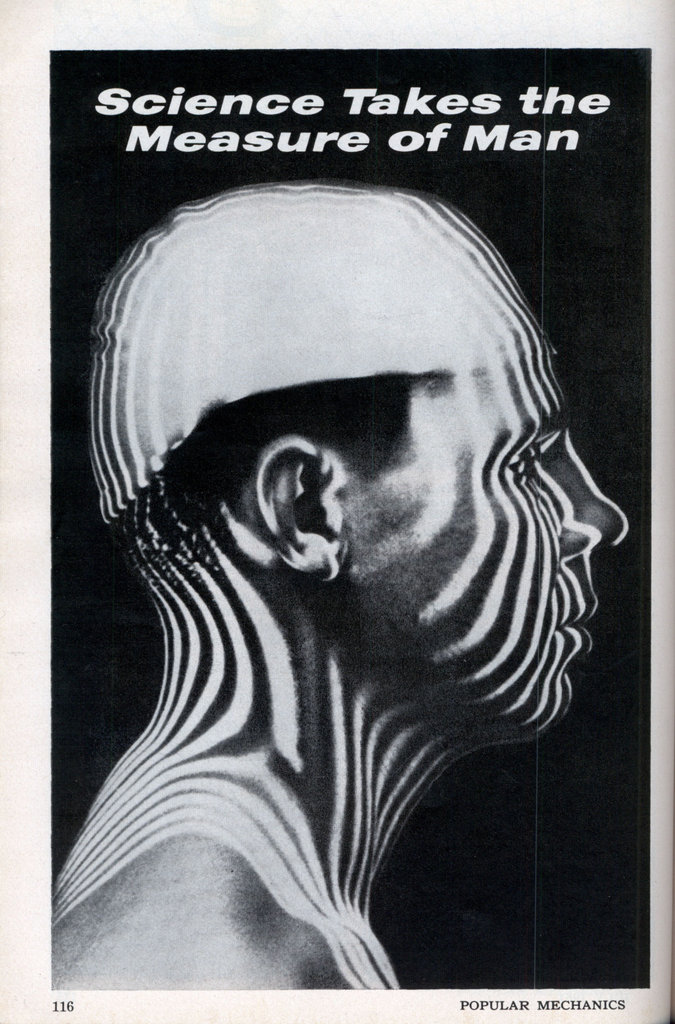 Science Takes the Measure of Man

FURNITURE for your future house, seats for next year’s cars, desks for new schools all are being designed by scientists who specialize in studying man’s past. The Air Force is leading the way and business and industry are following close behindâ€”in using anthropology to make clothing fit better, seats more comfortable and working conditions safer and more efficient. The Air Force started using anthropology, the science that led to reconstruction of Neanderthal and Cro-Magnon man, to design pressure suits and other space-age clothing and equipment. Man has been changing his shape constantly through the centuries. Today’s average male would not be able to squeeze into a suit of medieval armor. Modern suits of armor are airplanes and spaceships. Designing them to fit today’s warriors properly is an immense problem. Anthropology solves this by using new tools to measure changing man.

Stationed at the massive Wright Air Development Division near Dayton, Ohio, is a group of Air Research and Development Command anthropologists. In determining the “shape” of things to come they still depend on the tape measure, calipers and other hand tools used by nonmilitary anthropologists. For the modern touch they have added torque wrenches, strain gauges, pediscopes, special measuring boards, palm-measuring instruments, finger-sizing charts and other special techniques. Faster and more accurate stereophotogrammetry, X ray, anthropo-photogrammetry and con-tourometry complete the new instruments for an old science.

These studies have helped the Air Force set up guides for clothing, cockpits, work space requirements and control designs. Newer studies go beyond body measurements. Biomechanical factors, such as muscle strength, human center-of-gravity variables, mobility and other data are used to design future equipment. Through these studies, airman effectiveness is improved by providing sufficient room in a cockpit or space cabin where space is at a premium. Flyers can easily reach and operate their controls without extraordinary strength or physical discomfort.

If you measure 18 inches across the shoulders you would compare to the average Air Force pilot today. This is about one-half inch more shoulder than the average World War II pilot, and almost two inches greater than the estimated average for World War I pilots.

These are only a small portion of the measurements, but they represent countless hours in the laboratory with tools. And findings of this sort are important to clothing manufacturers, too.

Anthropology studies provided a basis for some of the new reclining seats used in modern passenger jets which allow passengers to sit, relax, or sleep in comfort. To do this, the Air Force scientists literally started at the bottom. Through a pediscope, which is a glass-bottomed seat with an angled mirror under it, they took photographs showing buttocks pressure points.

Using a stereoscopic three-dimensional photographic technique, the scientists took a series of photographs after stippling their subjects with paint to provide contrast. This stippled effect brings out the body’s contours and, with the aid of a special viewer, allows maps to be made of the body, its diameters, surface arcs and areas, circumference shapes, proportions and volume.

With anthro-photogrammetry, six mirrors are used to record simultaneously on a photograph the top, sides, front and back views of one man, revealing his special physical characteristics and shape.

Another important device is the chair-on-a-swing used to measure a person’s center of gravity. Using a plumb-line principle, the chair containing the subject is suspended and the plumb line is drawn on a cardboard attached to the side of the suspension frame. Changing the point of suspension several times and drawing the resulting changes in the plumb line, the scientists obtain a point where the lines cross for the individual’s center of gravity.

Among the older anthropology measuring instruments is the common X ray. Internal photographs are used for studies of the mobility and flexibility of the body.

All these factors are added together and form the gigantic slide rule used in designing future aircraft and spacecraft crew stations, space clothing that is both protective and flexible and easier-to-grasp handles for tools, luggage and appliances. They already are being considered in the design of civilian clothing, tools, luggage and perhaps even your chair of tomorrow.