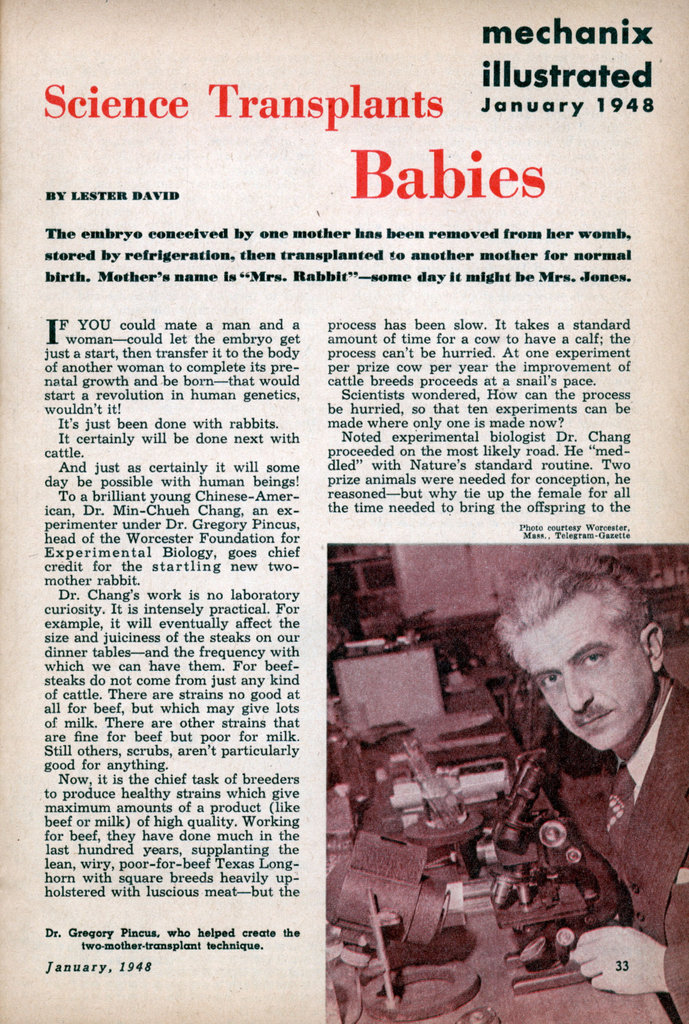 The embryo conceived by one mother has been removed from her womb, stored by refrigeration, then transplanted to another mother for normal birth. Mother’s name Is “Mrs. Rabbit”—some day it might be Mrs. Jones.

IF YOU could mate a man and a woman—could let the embryo get just a start, then transfer it to the body of another woman to complete its prenatal growth and be born—that would start a revolution in human genetics, wouldn’t it!

It’s just been done with rabbits.

It certainly will be done next with cattle.

And just as certainly it will some day be possible with human beings!

Dr. Chang’s work is no laboratory curiosity. It is intensely practical. For example, it will eventually affect the size and juiciness of the steaks on our dinner tables—and the frequency with which we can have them. For beefsteaks do not come from just any kind of cattle. There are strains no good at all for beef, but which may give lots of milk. There are other strains that are fine for beef but poor for milk. Still others, scrubs, aren’t particularly good for anything.

Now, it is the chief task of breeders to produce healthy strains which give maximum amounts of a product (like beef or milk) of high quality. Working for beef, they have done much in the last hundred years, supplanting the lean, wiry, poor-for-beef Texas Long-horn with square breeds heavily upholstered with luscious meat—but the process has been slow. It takes a standard amount of time for a cow to have a calf; the process can’t be hurried. At one experiment per prize cow per year the improvement of cattle breeds proceeds at a snail’s pace.

Scientists wondered, How can the process be hurried, so that ten experiments can be made where only one is made now?

Noted experimental biologist Dr. Chang proceeded on the most likely road. He “meddled” with Nature’s standard routine. Two prize animals were needed for conception, he reasoned—but why tie up the female for all the time needed to bring the offspring to the point of birth? Might it not be possible to take the prize female’s ovum soon after conception and transfer it for development to any ordinary female, valueless for breeding? The transplant would contain all the valuable gene combinations given it by its two prize parents; the second mother would merely supply blood for nourishment and a place to grow, without altering its heredity in any way. And the prize female would quickly be ready to start off another prize offspring in some other desired combination with a selected prize male.

All stock breeding experiments would be accelerated. Desirable strains would be produced much faster. And there would be much more prize stock around for both experiments and large-scale breeding.

And no wonder the geneticists were immediately interested too. Here was something new and practical—something which gave promise of adding a new chapter to human breeding.

It was because of their far shorter birth process and their small size and ease of handling that Dr. Chang chose to begin his experiments with rabbits.

He soon found that one of his big problems was that of keeping the fertilized eggs of the conceiving mother until they could be placed in the bearing mother. He worked at techniques. Now he can keep the fertilized eggs alive for as much as 144 hours before transplanting them to develop and be born.

He keeps them in a refrigerator!

Storage on ice—that is the thing that excites the animal breeders. Their artificial insemination technique is valuable, but it is restricted to the use of sperm cells. The sperm cells of prize cattle are used to fertilize prize females and thus produce more desirable stock; for example, it is common practice to preserve by refrigeration the sperm of famed Argentine bulls and fly it to various parts of this country. But because of the storability of transplants on ice, breeders now foresee the day when the prize cattle’s fertilized eggs themselves—not the sperm—can be preserved long enough for them to be flown wherever desired.

And then, arriving, they can be transplanted into mothers of ordinary breeding in the new country—as much as ten thousand miles away.

Dr. Chang found that transplanted fertilized eggs flourished. They grew just as big and healthy and the young finally were born just as normally as if it were their real mothers that were seeing them through their pre-natal life.

So—human mothers, in the days to come, need have no fear that fertilized ova transplanted to them will result in children that are not healthy and completely normal. Nor need unmarried women fear social ostracism by undertaking motherhood in this way. Of course the first cases may get publicity and cause comment; but it is difficult to see how anyone can criticize any woman who must remain unmarried, or who chooses to remain unmarried, and has a baby in this way. No breach of morality occurs.

Since it is normal for women to have children, and many women who can’t have them undergo psychological stresses, the transplant technique would fulfill them, and make them far more normal and valuable human beings. This is the case, too, with the many women who cannot or should not have children because of their own bad heredity, or that of their husband.

Toward all this, the first step, and probably the most important one, has already been made with Mrs. Rabbit. Here is what Dr. Chang did in his laboratory to arrive at his results: The eggs of super-ovulated rabbits (rabbits which can produce superior young) were stored in pure rabbit serum at low temperatures for varying lengths of time and then cultured at 37 degrees centigrade for 24 hours to determine whether they would grow normally. He was looking, at this stage, to see if normal cleavage, first step in development, would result.

He found that if he cooled the fertilized eggs rapidly from 25 to 0 degrees centigrade immediately after removing them from the mother rabbits, and then maintained them at the 37-degree temperature for a day, there would be no growth.

On the other hand, if he cooled the eggs slowly, from 25 to 0 in a five-hour period, he had happy results. This proved to him that the ova are subject to temperature shock upon rapid cooling but can be acclimatized to lower temperatures by gradual reduction.

Then Dr. Chang wanted to know—as did all animal breeders and geneticists along with him—just how long can these eggs be stored and still remain alive? He investigated, and found that at 10 degrees 53.8 per cent lived after 72 hours, and 23.6 after 144 hours.

Now Dr. Chang came to the vital question. Would these refrigerated babies-to-be develop into rabbits if he transplanted them into the bodies of female rabbits?

He injected the foster-mother rabbits with gonadtrophin to induce ovulation, rested them for 24 hours and then inserted the stored eggs into their Fallopian tubes. In each instance, from four to 15 eggs were transplanted into each rabbit.

It worked. Litter upon litter of fine, prize rabbits came from the foster-mothers. All the young were healthy, normal and genetically true to their real parents!