Science Will Not Destroy Manâ€”But Ignorance May (Jan, 1949) 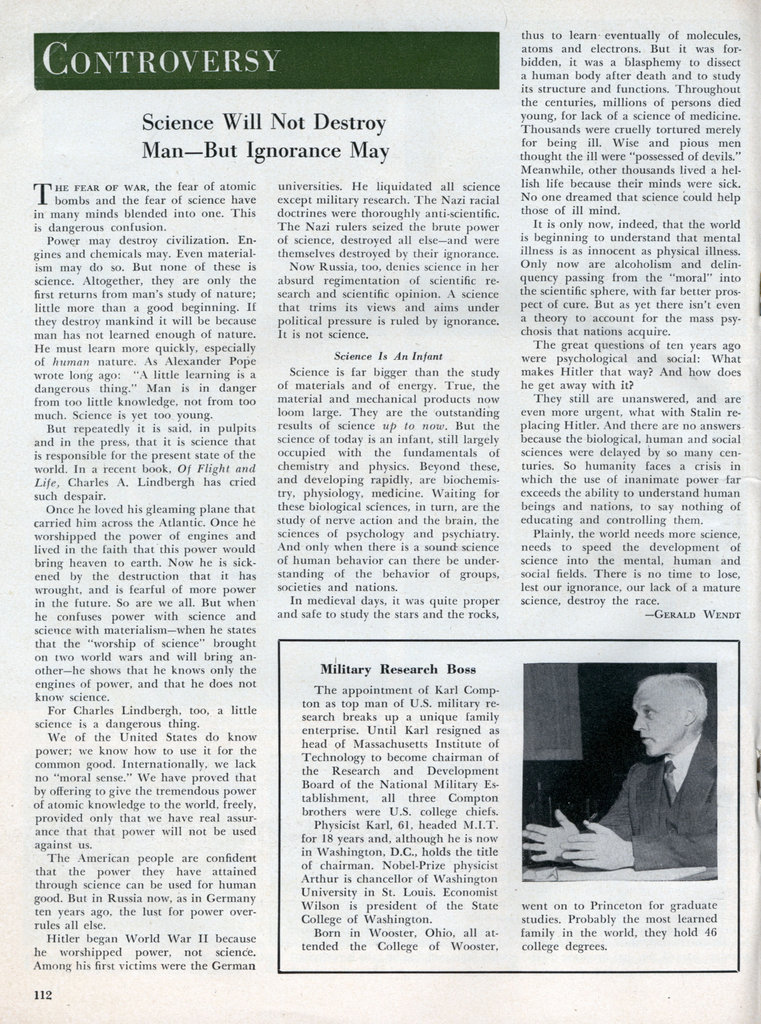 Science Will Not Destroy Manâ€”But Ignorance May

The fear of war, the fear of atomic bombs and the fear of science have in many minds blended into one. This is dangerous confusion.

Power may destroy civilization. Engines and chemicals may. Even materialism may do so. But none of these is science. Altogether, they are only the first returns from man’s study of nature; little more than a good beginning. If they destroy mankind it will be because man has not learned enough of nature. He must learn more quickly, especially of human nature. As Alexander Pope wrote long ago: “A little learning is a dangerous thing. ” Man is in danger from too little knowledge, not from too much. Science is yet too young.

But repeatedly it is said, in pulpits and in the press, that it is science that is responsible for the present state of the world. In a recent book. Of Flight and Life, Charles A. Lindbergh has cried such despair.

Once he loved his gleaming plane that carried him across the Atlantic. Once he worshipped the power of engines and lived in the faith that this power would bring heaven to earth. Now he is sickened by the destruction that it has wrought, and is fearful of more power in the future. So are we all. But when he confuses power with science and science with materialismâ€”when he states that the “worship of science” brought on two world wars and will bring anotherâ€”he shows that he knows only the engines of power, and that he does not know science.

For Charles Lindbergh, too, a little science is a dangerous thing.

We of the United States do know power; we know how to use it for the common good. Internationally, we lack no “moral sense. ” We have proved that by offering to give the tremendous power of atomic knowledge to the world, freely, provided only that we have real assurance that that power will not be used against us.

The American people are confident that the power they have attained through science can be used for human good. But in Russia now. as in Germany ten years ago. the lust for power overrules all else.

Hitler began World War II because he worshipped power, not science. Among his first victims were the German universities. He liquidated all science except military research. The Nazi racial doctrines were thoroughly anti-scientific. The Nazi rulers seized the brute power of science, destroyed all elseâ€”and were themselves destroyed by their ignorance. Now Russia, too, denies science in her absurd regimentation of scientific research and scientific opinion. A science that trims its views and aims under political pressure is ruled by ignorance. It is not science.

Science Is An Infant Science is far bigger than the study of materials and of energy. True, the material and mechanical products now loom large. They are the outstanding results of science up to now. But the science of today is an infant, still largely occupied with the fundamentals of chemistry and physics. Beyond these, and developing rapidly, are biochemistry, physiology, medicine. Waiting for these biological sciences, in turn, are the study of nerve action and the brain, the sciences of psychology and psychiatry. And only when there is a sound- science of human behavior can there be understanding of the behavior of groups, societies and nations.

In medieval days, it was quite proper and safe to study the stars and the rocks, thus to learn eventually of molecules, atoms and electrons. But it was forbidden, it was a blasphemy to dissect a human body after death and to study its structure and functions. Throughout the centuries, millions of persons died young, for lack of a science of medicine. Thousands were cruelly tortured merely for being ill. Wise and pious men thought the ill were “possessed of devils. ” Meanwhile, other thousands lived a hellish life because their minds were sick. No one dreamed that science could help those of ill mind.

It is only now, indeed, that the world is beginning to understand that mental illness is as innocent as physical illness. Only now are alcoholism and delinquency passing from the “moral” into the scientific sphere, with far better prospect of cure. But as yet there isn’t even a theory to account for the mass psychosis that nations acquire.

The great questions of ten years ago were psychological and social: What makes Hitler that way? And how does he get away with it?

They still are unanswered, and are even more urgent, what with Stalin replacing Hitler. And there are no answers because the biological, human and social sciences were delayed by so many centuries. So humanity faces a crisis in which the use of inanimate power far exceeds the ability to understand human beings and nations, to say nothing of educating and controlling them.

Plainly, the world needs more science, needs to speed the development of science into the mental, human and social fields. There is no time to lose, lest our ignorance, our lack of a mature science, destroy the race.