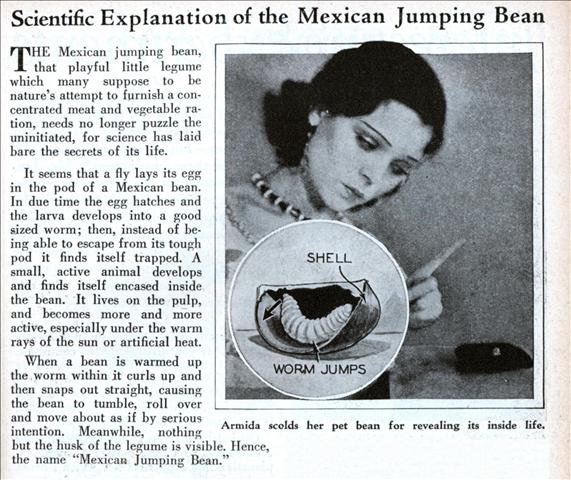 THE Mexican jumping bean, that playful little legume which many suppose to be nature’s attempt to furnish a concentrated meat and vegetable ration, needs no longer puzzle the uninitiated, for science has laid bare the secrets of its life.

It seems that a fly lays its egg in the pod of a Mexican bean. In due time the egg hatches and the larva develops into a good sized worm; then, instead of being able to escape from its tough pod it finds itself trapped. A small, active animal develops and finds itself encased inside the bean. It lives on the pulp, and becomes more and more active, especially under the warm rays of the sun or artificial heat.

When a bean is warmed up the worm within it curls up and then snaps out straight, causing the bean to tumble, roll over and move about as if by serious intention. Meanwhile, nothing but the husk of the legume is visible. Hence, the name “Mexican Jumping Bean.”