I had to do two sleep studies last year and I can tell you, they now collect just a bit more data. It is really amazing the number of wires and sensors they can stick on to you and then expect you to go to sleep. 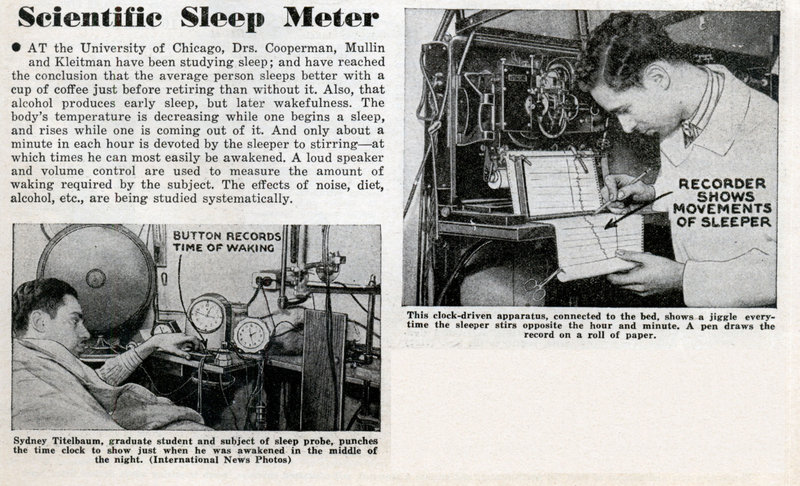 AT the University of Chicago, Drs. Cooperman, Mullin and Kleitman have been studying sleep; and have reached the conclusion that the average person sleeps better with a cup of coffee just before retiring than without it. Also, that alcohol produces early sleep, but later wakefulness. The body’s temperature is decreasing while one begins a sleep, and rises while one is coming out of it. And only about a minute in each hour is devoted by the sleeper to stirring—at which times he can most easily be awakened. A loud speaker and volume control are used to measure the amount of waking required by the subject. The effects of noise, diet, alcohol, etc., are being studied systematically.

Sydney Titelbaum, graduate student and subject of sleep probe, punches the time clock to show just when he was awakened in the middle of the night. (International News Photos)

This clock-driven apparatus, connected to the bed, shows a jiggle every time the sleeper stirs opposite the hour and minute. A pen draws the record on a roll of paper.