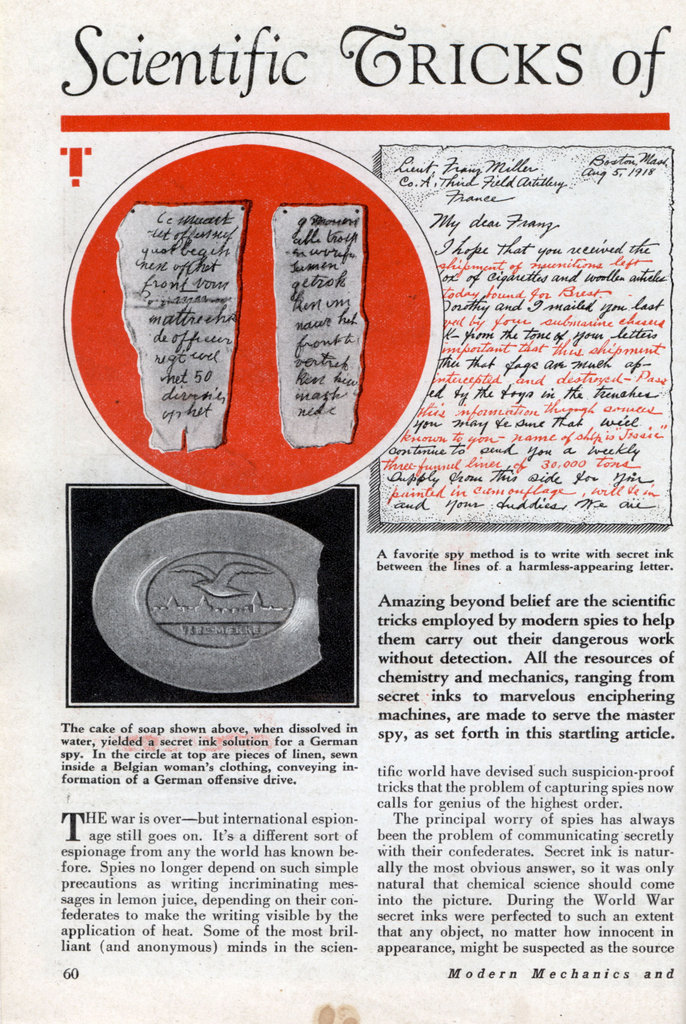 Amazing beyond belief are the scientific tricks employed by modern spies to help them carry out their dangerous work without detection. All the resources of chemistry and mechanics, ranging from secret inks to marvelous enciphering machines, are made to serve the master spy, as set forth in this startling article.

THE war is overâ€”but international espionage still goes on. It’s a different sort of espionage from any the world has known before. Spies no longer depend on such simple precautions as writing incriminating messages in lemon juice, depending on their confederates to make the writing visible by the application of heat. Some of the most brilliant (and anonymous) minds in the scientific world have devised such suspicion-proof tricks that the problem of capturing spies now calls for genius of the highest order.

The principal worry of spies has always been the problem of communicating secretly with their confederates. Secret ink is naturally the most obvious answer, so it was only natural that chemical science should come into the picture. During the World War secret inks were perfected to such an extent that any object, no matter how innocent in appearance, might be suspected as the source of such inks. In early war days it was quite common for certain salts, such as cobalt or potassium ferro-cyanide, which can be used in secret inks, to be carried by spies, concealed in cakes of soap, in tooth paste tubes, etc.

But this method was too easy to detect, so German chemists devised subtle chemicals which could be sprinkled invisibly on articles of clothing, such as collars or handkerchiefs. When the spy wished to write a letter, all he need do was soak his collar in distilled water, dissolve out some of the chemicals, and use the solution as his ink.

One of the most brilliant pieces of detective work in the history of espionage must be credited to the American scientists who solved the secret of a certain German secret ink which was not an ink at all, but plain water! Obviously, no chemical reaction could bring the writing to light, so the problem became purely a mechanical one, involving the slight disturbance in the fibers of the paper caused by the water used for writing. It was finally discovered that if the sheet of paper were sprayed with iodine vapor, the particles would settle down in the disturbed fibers, giving them a brownish tint which made the tracks of the pen easily visible. Chemists, in concocting secret inks, strive to make them similar in appearance to some every-day object. Secret inks carried in liquid form are often disguised as perfume, mouth wash, or dentifrice, and a complicated analysis is necessary to prove that they are not indeed what they seem. In fact, ordinary methods of analysis often fail because of the extremely minute quantity of suspicious chemicals. In such cases, a spectroscopic analysis is made, which will reveal the presence of silver or similar agents.

Still another triumph must be credited to American chemists, who during late days of the war succeeded in developing a universal reagent which would develop secret inks under any and all conditions. So carefully guarded is this formula that no inkling of its nature has gone beyond the knowledge of the men who discovered it. Its vital importance in protecting the country against the activities of enemy agents can be well understood. No medals were awarded these chemists, howeverâ€”no fame to them, beyond their own small circle. Science must be its own reward to men who probe spy secrets.

Famous spies, such as Mata Hari, the dancer who was executed by the French, and “Mlle. Docteur,” the woman agent who was in German pay and who now has retired to Switzerland, a hopelessly broken drug addict, all used secret inks. Most of them knew nothing of the chemicals they used.

During the war the French became alarmed by a serious leakage of information, and their suspicions were directed toward a certain woman who received numerous shipments of eggs from Switzerland. A study of her correspondence revealed no use of secret ink, and it seemed that she was indeed innocent until a French chemist, coming into possession of a shipment of eggs intended for the woman, dipped them into a solution of gall-nut and revealed secret writing on their shells.

Not even the carefully sealed diplomatic messages of governments are safe from the attention of spies, who are so clever at their tasks, using all the mechanical resources at their disposal, that they can send messages on after they have opened the seals without anyone suspecting that the envelope has been tampered with. The familiar method of steaming an envelope to open it is still much used, but the replacing of a diplomatic seal requires considerable skill. Here is how it is done:

In the case of a small seal, a thin sheet of lead, backed by India rubber, is screwed down upon the seal in a writing press. This forms a metal mold which reproduces the seal perfectly when the wax is melted and poured in. To duplicate a large seal, it is first dusted with chalk and a piece of gutta percha, heated with hot water, placed over it and pressed down tightly. When cold, an impression is taken of the gutta percha, a second mold is thus obtained, graphite is applied, and a copper shell formed by deposit in an electrolytic bath. It is then easy to reproduce a perfect seal by pouring wax into the metal shell.

Science and inventive genius has likewise played its part in devising and solving codes and ciphers, invariably used in the transmission of spy and diplomatic messages. Certain methods of enciphering make use of mechanical principles, such as the “cipher disk,” in which the letters of the alphabet are arranged around the edge of a circle, with a series of numbers appearing beneath each letter. The finished message thus appears as a series of numbers, jumbled up according to a prearranged key. The “lattice” method of decipherment is likewise purely mechanical. A series of jumbled letters, evenly spaced on a sheet of paper, gives up its message readily when a lattice is placed over it. This lattice is simply a sheet of paper in which holes have been cut at intervals, just large enough to permit a letter of the message to show through. In this manner, only the letters which constitute the message can be read, the confusing and superfluous letters * being hidden by the lattice.

A trick somewhat along the lines of the lattice stunt was worked by a German spy who published a French bee journal, the cover of which contained a drawing of a hive, with a dozen bees flying about in the background. Apparently this cover was harmless enough, but authorities became suspicious of the publisher and scanned his little magazine with close attention. It developed that each month the bees on the cover were shown in different positions, and a confession was finally extracted that this was the spy’s method of conveying informationâ€”his confederates, on receiving the magazine, would rule the cover off in squares. If the bee appeared in square one, for example, it meant that troops were advancing; if a bee appeared in square two, it meant that the sector involved was Verdunâ€”and so on.

Practically all ciphers and codes, however, can be solved by human ingenuity. The Bell Telephone laboratories have produced a machine which will automatically encipher a message by writing it on keys like an ordinary typewriter. When sent over the wires, however, the letters are unintelligibly jumbled, but are rearranged by a similar machine on the receiving end of the message. Modifications of this machine will encipher messages in which there are no repetitions of letter combinationsâ€”and without repetitions, no one can decipher the message. Thus science has finally solved the problem of sending messages in absolute secrecy.

How is it that code experts can decipher the most secret messages? Mathematics! Mathematical formula will reveal the presence of certain letter combinations oc-curing in certain frequencies, and analysis will break down the message, and will tell in advance in what language it was written.

If this last statement sounds impossible, consider the fact that a message containing several letter k’s and no letter q’s could not be written in Spanish because there is no k in the Spanish alphabet, but the letter q is much used. Each language has its own frequency tables, by which is meant the number of times individual letters appear in ordinary messages. The letter e, for instance, is the most used in English. Countless clues of this nature, tracked down by relentless mathematicians, invariably succeed in tearing away the secrecy of ciphers. Thus it is that science, which helps spies keep their secrets, also helps to wrest those same secrets from them!