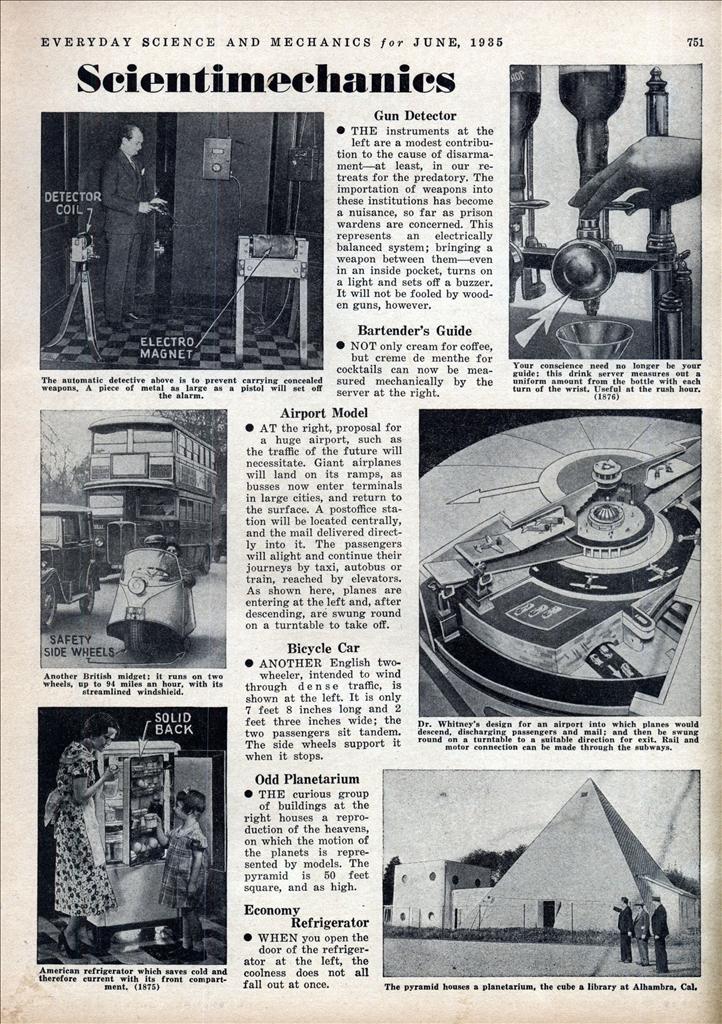 Gun Detector
THE instruments at the left are a modest contribution to the cause of disarmament—at least, in our retreats for the predatory. The importation of weapons into these institutions has become a nuisance, so far as prison wardens are concerned. This represents an electrically balanced system; bringing a weapon between them—even in an inside pocket, turns on a light and sets off a buzzer. It will not be fooled by wooden guns, however.

Bartender’s Guide
NOT only cream for coffee, but creme de menthe for cocktails can now be measured mechanically by the server at the right.

Airport Model
AT the right, proposal for a huge airport, such as the traffic of the future will necessitate. Giant airplanes will land on its ramps, as busses now enter terminals in large cities, and return to the surface. A postoffice station will be located centrally, and the mail delivered directly into it. The passengers will alight and continue their journeys by taxi, autobus or train, reached by elevators. As shown here, planes are entering at the left and, after descending, are swung round on a turntable to take off.

Bicycle Car
ANOTHER English two-wheeler, intended to wind through dense traffic, is shown at the left. It is only 7 feet 8 inches long and 2 feet three inches wide; the two passengers sit tandem. The side wheels support it when it stops.

Odd Planetarium
THE curious group of buildings at the right houses a reproduction of the heavens, on which the motion of the planets is represented by models. The pyramid is 50 feet square, and as high.

Economy Refrigerator
WHEN you open the door of the refrigerator at the left, the coolness does not all fall out at once.