This is scary. I love how the fact that no one will give him dead bodies to resurrect is referred to as his “predicament”. 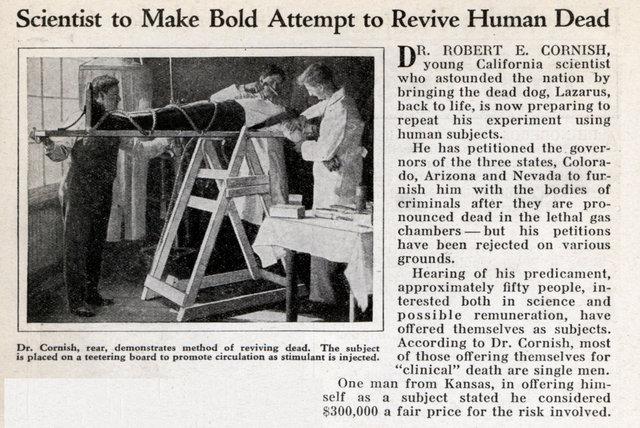 DR. ROBERT E. CORNISH, young California scientist who astounded the nation by bringing the dead dog, Lazarus, back to life, is now preparing to repeat his experiment using human subjects.

He has petitioned the governors of the three states, Colorado, Arizona and Nevada to furnish him with the bodies of criminals after they are pronounced dead in the lethal gas chambers â€” but his petitions have been rejected on various grounds.

Hearing of his predicament, approximately fifty people, interested both in science and possible remuneration, have offered themselves as subjects. According to Dr. Cornish, most of those offering themselves for “clinical” death are single men. One man from Kansas, in offering himself as a subject stated he considered $300,000 a fair price for the risk involved.