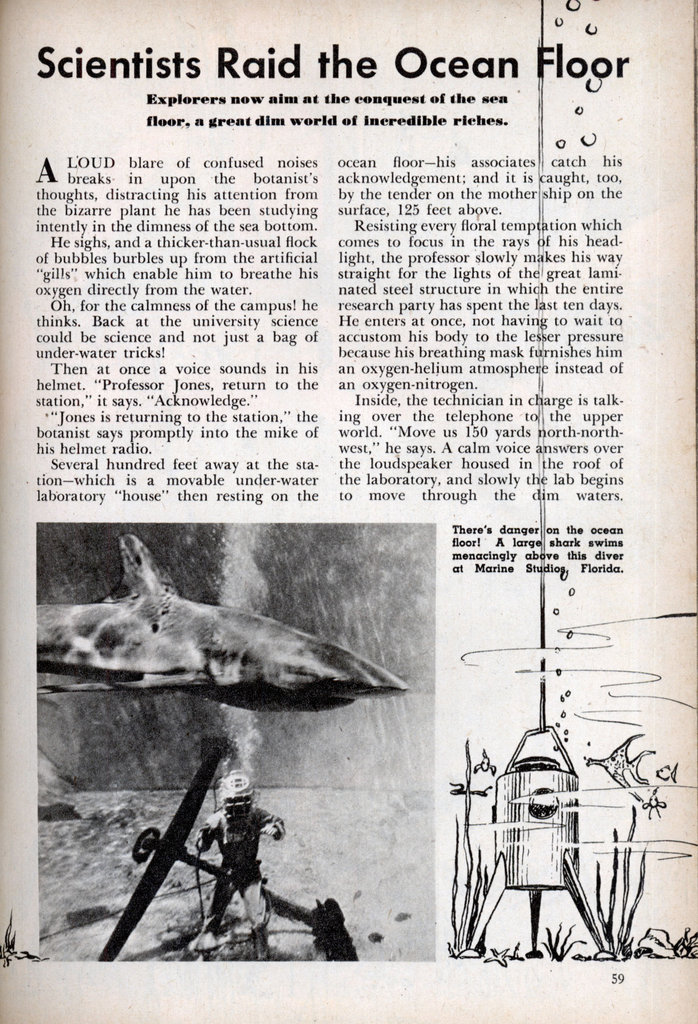 Explorers now aim at the conquest of the sea floor, a great dim world of incredible riches.

A LOUD blare of confused noises breaks in upon the botanist’s thoughts, distracting his attention from the bizarre plant he has been studying intently in the dimness of the sea bottom.

He sighs, and a thicker-than-usual flock of bubbles burbles up from the artificial “gills” which enable him to breathe his oxygen directly from the water.

Oh, for the calmness of the campus! he thinks. Back at the university science could be science and not just a bag of under-water tricks!

Then at once a voice sounds in his helmet. “Professor Jones, return to the station,” it says. “Acknowledge.”

“Jones is returning to the station,” the botanist says promptly into the mike of his helmet radio.

Several hundred feet away at the stationâ€”which is a movable under-water laboratory “house” then resting on the ocean floorâ€”his associates catch his acknowledgement; and it is caught, too, by the tender on the mother ship on the surface, 125 feet above.

Resisting every floral temptation which comes to focus in the rays of his headlight, the professor slowly makes his way straight for the lights of the great laminated steel structure in which the entire research party has spent the last ten days. He enters at once, not having to wait to ” accustom his body to the lesser pressure because his breathing mask furnishes him an oxygen-helium atmospheric instead of an oxygen-nitrogen.

Inside, the technician in charge is talking over the telephone toll the upper world. “Move us 150 yards north-northwest,” he says. A calm voice answers over the loudspeaker housed in the roof of the laboratory, and slowly the lab begins to move through the dim waters.

Through a small window the man at the controls sees the light from the upper world streaming down through the dark water like sunlight through the stained-glass windows of a cathedral.

A third man, on watch at another window, flashes on one of the big searchlights attached outsideâ€”scattering a crowd of curious fish that have been gazing through the window at him. Slowly the “house” comes to a stop.

“Better move us 20 yards north-northeast, ” says the technician in charge. “I can see the edge of the abyss.” On the surface, orders are barked, the mother ship swings, and the great house inches slowly sideways, then downward, coming to rest with its pronged legs stuck in the rich mud of the deep. A scientist at the dials of the undersea laboratory reads off the pressure. A voice from above comes over the loudspeaker.

There is sudden activity inside. One of the scientists starts checking the diving equipment and apparatus stored along one side of the house. Others take down readings from the dials and make observations through the four windows. The man at the phone relays the readings to the surface where a trained crew of technicians and scientists start checking and calculating. . . .

Artificial gills! Helium breathing! Undersea laboratories! Electric lighting, telephones, radio and walkie-talkies on the ocean floor! Some of these inventions already are at hand. Others are just around the cornerâ€”not far around it. Scientists are overcoming the final obstacles to opening up a whole rich new worldâ€”the world that lies deep below the surface of the waters.

The above is no vague dream but the picture of an experiment in undersea living and research soon to be carried out. It will be the culmination of centuries of progress in underwater research.

The United States government has for sometime been carrying out extensive hydrographic surveys to determine the contour of the undersea land. The charts resulting are now printed in booklets available to everyone, for industrial or private useâ€”so you may build an undersea house somewhere off the Atlantic or Pacific coasts, or grow an undersea garden, or cultivate pearls, or sail under the surface, or dive just for pleasure.

Navy scientists and other research workers have perfected under-water sound systems which will enable us to locate survivors lost many thousands of miles at sea. Sound at a depth of 2,000 to 6,000 feet has such amazing propensities for travel that the water becomes a veritable speaking-tube. Tests conducted in the Bahamas during the war showing that survivors dropping a package of TNT timed to explode at 3,000-4,000 feet could produce a report audible in useful intensities 3,100 miles away. Three or more hydrophone stations, widely separated, could pick up the signal, obtain a “fix”

and send out rescue planes immediately. But probably the most important work has been in diving, resulting in the development of the under-water laboratory. These houses, now in the experimental stage, will be able to hold as many as a dozen occupants along with laboratory and sleeping facilities; and the next few years will see them attack deeper and deeper levels of the sea, where groups of trained scientists will study vegetable and animal life, discover minerals and sea wealth, and conduct undersea experiments. In the shoal depths these houses will be equipped with double-lock doors, so that the scientists can come and go as they please; and there will be other facilities to prevent bends, in addition to helium breathing.

Teams of diver-botanists and explorers will move from the laboratory into the dimness of the accessible sea-floor world with their cameras and equipment. The geologist will study at first hand the ocean bottom, a modern explorer dressed like a man from another planet. Physicians will test the reactions of men in such conditions, and others will advance still further the research which will make possible complete domination of the undersea.

The Supersonic Fathometer, a device similar to radar, which tells immediately the depth of the ocean and something of the composition of the sea bed, has already done much to further industrial research beneath the ocean. The potential rewards to industry are tremendous. | Oil companies have long been pumping oil from the ocean’s sea bed in what is known as the tidewater regionâ€”the strip extending from where the tide waters touch land to the edge of the continental shelf. The sea-bottom may become a first-rate issue for International conflict, for already lawsuits have arisen over the legal ownership of the sea bed in the tide-water region and the right to extract oil from it.

Governments are very much aware of the treasures that lie in the sea and below it. President Truman has said, “Petroleum geologists believe that portions of the continental shelf beyond the three-mile limit contain valuable oil deposits. The study of sub-surface structures associated with oil deposits which have been discovered along the Gulf coast of Texas, for instance, indicates that corresponding deposits may underlie the offshore or submerged land. “The trend of oil-productive salt domes extends directly into the Gulf of Mexico off the Texas coast. Oil is also being taken at present from wells within the three-mile limit off the coast of California. It is quite possible, geologists say, that the oil deposits extend beyond the traditional limit of national jurisdiction.”

He added that minerals other than oil may be expected to be found in these submerged lands-such minerals as sulphur, zircon and rutile, in addition to petroleum. Gold also exists in these areas.

Among the other discoveries in the deep will be new forms of sea-bottom vegetation and strange and fabulous animals dwelling in the haunts of the midnight sea, animals that may dwarf the whale and stagger the imagination for size and shape. In the shoal waters of the lands of the world, new and beautiful undersea gardens will spring up, and husbandry of the sea will take its place along with farming on the land.

The possibilities for advancement are tremendous. And in the vanguard of science will be men in under-water laboratories with the inventions previously mentioned, exploring, experimenting, pushing the ever-receding frontiers of our nation down into the dark depths of the ocean world.

The next few years will see the fruition of man’s long struggle for supremacy over the deep, the explorer, scientist and industrialist advancing hand in hand to open up this new world and pour its riches into our laps. Then, with the advance of the rest into the new realm of the undersea for sustenance, work and sport, the conquest of the deep will be complete.