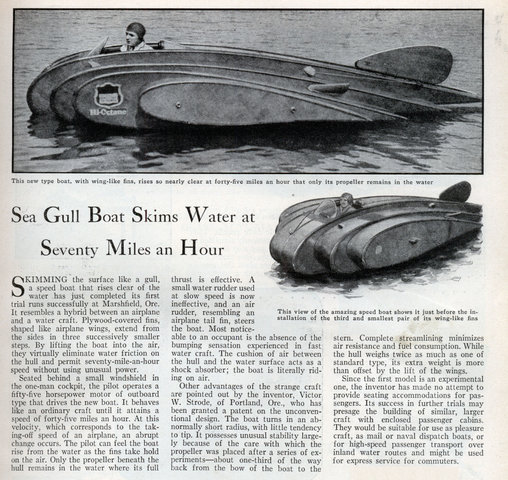 SKIMMING the surface like a gull, a speed boat that rises clear of the water has just completed its first trial runs successfully at Marshfield, Ore. It resembles a hybrid between an airplane and a water craft. Plywood-covered fins, shaped like airplane wings, extend from the sides in three successively smaller steps. By lifting the boat into the air, they virtually eliminate water friction on the hull and permit seventy-mile-an-hour speed without using unusual power.

Seated behind a small windshield in the one-man cockpit, the pilot operates a fifty-five horsepower motor of outboard type that drives the new boat. It behaves like an ordinary craft until it attains a speed of forty-five miles an hour. At this velocity, which corresponds to the taking-off speed of an airplane, an abrupt change occurs. The pilot can feel the boat rise from the water as the fins take hold on the air. Only the propeller beneath the hull remains in the water where its full

thrust is effective. A small water rudder used at slow speed is now ineffective, and an air rudder, resembling an airplane tail fin, steers the boat. Most noticeable to an occupant is the absence of the’ bumping sensation experienced in fast water craft. The cushion of air between the hull and the water surface acts as a shock absorber; the boat is literally riding on air.

Other advantages of the strange craft are pointed out by the inventor, Victor W. Strode, of Portland, Ore., who has been granted a patent on the unconventional design. The boat turns in an abnormally short radius, with little tendency to tip. It possesses unusual stability largely because of the care with which the propeller was placed after a series of experimentsâ€”about one-third of the way back from the bow of the boat to the stern. Complete streamlining minimizes air resistance and fuel consumption. While the hull weighs twice as much as one of standard type, its extra weight is more than offset by the lift of the wings.

Since the first model is an experimental one, the inventor has made no attempt to provide seating accommodations for passengers. Its success in further trials may presage the building of similar, larger craft with enclosed passenger cabins. They would be suitable for use as pleasure craft, as mail or naval dispatch boats, or for high-speed passenger transport over inland water routes and might be used for express service for commuters.