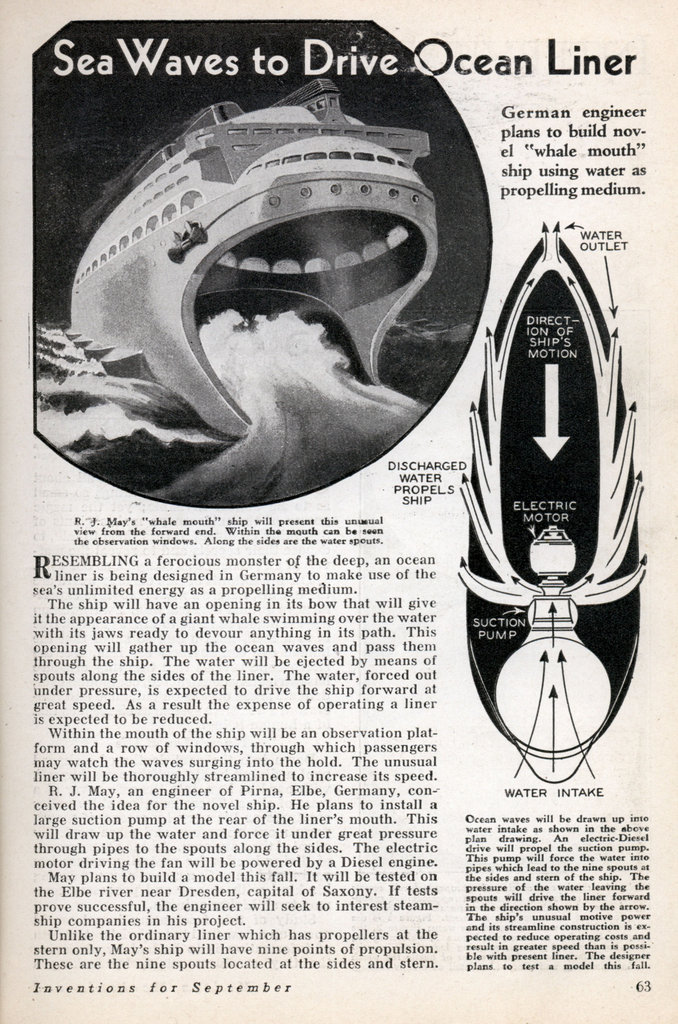 RESEMBLING a ferocious monster of the deep, an ocean liner is being designed in Germany to make use of the sea’s unlimited energy as a propelling medium.

The ship will have an opening in its bow that will give it the appearance of a giant whale swimming over the water with its jaws ready to devour anything in its path. This opening will gather up the ocean waves and pass them through the ship. The water will be ejected by means of spouts along the sides of the liner. The water, forced out under pressure, is expected to drive the ship forward at great speed. As a result the expense of operating a liner is expected to be reduced.

Within the mouth of the ship will be an observation platform and a row of windows, through which passengers may watch the waves surging into the hold. The unusual liner will be thoroughly streamlined to increase its speed.

R. J. May, an engineer of Pirna, Elbe, Germany, conceived the idea for the novel ship. He plans to install a large suction pump at the rear of the liner’s mouth. This will draw up the water and force it under great pressure through pipes to the spouts along the sides. The electric motor driving the fan will be powered by a Diesel engine.

May plans to build a model this fall. It will be tested on the Elbe river near Dresden, capital of Saxony. If tests prove successful, the engineer will seek to interest steamship companies in his project.

Unlike the ordinary liner which has propellers at the stern only, May’s ship will have nine points of propulsion. These are the nine spouts located at the sides and stern.