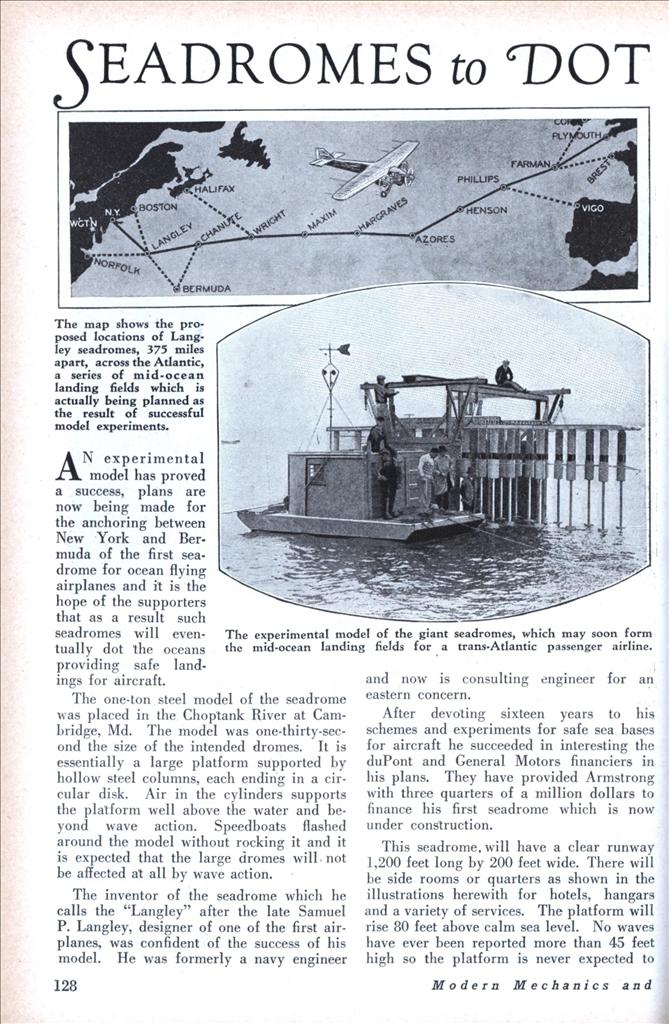 SEADROMES to DOT the ATLANTIC OCEAN

AN experimental model has proved a success, plans are now being made for the anchoring between New York and Bermuda of the first seadrome for ocean flying airplanes and it is the hope of the supporters that as a result such seadromes will eventually dot the oceans providing safe landings for aircraft.

The one-ton steel model of the seadrome was placed in the Choptank River at Cambridge, Md. The model was one-thirty-second the size of the intended dromes. It is essentially a large platform supported by hollow steel columns, each ending in a circular disk. Air in the cylinders supports the platform well above the water and beyond wave action. Speedboats flashed around the model without rocking it and it is expected that the large dromes will not be affected at all by wave action.

The inventor of the seadrome which he calls the “Langley” after the late Samuel P. Langley, designer of one of the first airplanes, was confident of the success of his model. He was formerly a navy engineer and now is consulting engineer for an eastern concern.

After devoting sixteen years to his schemes and experiments for safe sea bases for aircraft he succeeded in interesting the duPont and General Motors financiers in his plans. They have provided Armstrong with three quarters of a million dollars to finance his first seadrome which is now under construction.

This seadrome, will have a clear runway 1,200 feet long by 200 feet wide. There will be side rooms or quarters as shown in the illustrations herewith for hotels, hangars and a variety of services. The platform will rise 80 feet above calm sea level. No waves have ever been reported more than 45 feet high so the platform is never expected to be awash. The buoyancy pillars will extend 160 feet below sea level.

The engineer, Armstrong, plans to anchor his first full-size seadrome halfway between New York and Bermuda. He studied hydro-graphic charts of the region he had in mind and calculated that there must be a high place in the ocean floor and with the aid of a navy survey ship he found the location desired some 400 miles from Manhattan and 375 miles from Bermuda in a virtually straight line. The table on the ocean floor is six miles long and four miles wide. It is only two miles below sea level. The surrounding depth is three to four miles.

The difference in depth will make a considerable saving in securing the 3-1/2 inch steel cable which will be laid to hold the seadrome in place. The huge anchors of the round bobbin type will dig into the sea floor and prevent drifting of the seadrome.

Mr. Armstrong hopes to have the Lang- ley completed and in place by next fall before Bermuda’s tourist season begins.

The engineer expects that as the Langley makes financial returns he will construct eight similar seadromes between the thirty-fifth and fortieth parallels and some 375 miles apart between New York and Plymouth, England. The 375-mile distance has been determined upon because it is an easy jump for any airplane and would be sufficient to safeguard trans-oceanic air tourists.

Mr. Armstrong, who is seeing his dream come true estimates that with these seadromes and the servicing made possible by them there will be safe Atlantic air crossings in as fast a time as 20 hours. If his plans materialize as he confidently expects and his experiments would indicate, it is possible that before many years have passed dangers of air travel over the seven seas will have been enormously reduced.