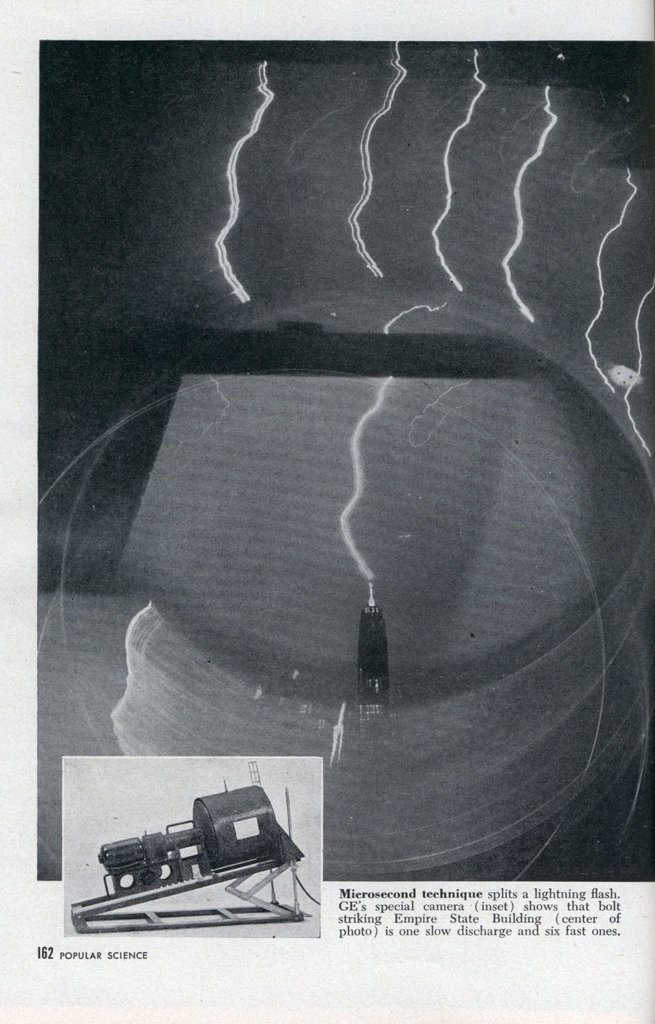 Measuring the split flashes of time that are microseconds makes possible many modern miracles of science.

IT TOOK you about one second, or 1,000,-000 microseconds, to read the title of this article. On that basis one microsecond may seem short enough to satisfy everyone, but to the modern electronics engineer it is a fairly long time. Describing a new electronic gadget, its inventor informs us that each dial division corresponds to 0.0132 microseconds; in other words, he is measuring down to a ten-thousandth of a millionth of a second.

That’s slicing it rather fine, but if it is worth a few dollars to you, you can buy a pulse generator that will deliver bursts of power adjustable down to 0.1 microsecond. You can order it from an advertisement-nothing special about itâ€”plug it into a wall socket like an electric iron, and you’re a member of the microsecond-splitting fraternity yourself. It’s economical to operate, tooâ€”consumes only 40 watts.

Is all this just a scientific stunt? Hardly, unless the major part of radio and electronic development during the last war and between the two wars is to be so regarded. Actually it represents a major technological revolution. If some Rip Van Winkle radio engineer awoke today he would hardly recognize the science he pioneered. Where he figured mainly in kilocycles, he would hear his younger colleagues talking megacycles and thousands of megacycles. Where he was concerned with the production of continuous waves, he would find bursts or pulses of energy playing as important a role.

The technique of producing these pulses would seem especially odd to him, for if he worked with vacuum tubes before his long sleep he would remember that the first rule was to avoid overloading and consequent distortion. Many circuits in use today by their very namesâ€”clipping, blocking, slicing, limiting, leveling, square-wave, etc show that they are designed to distort wave shapes rather than to preserve them. Finally, he would discover these strange contours manipulated with a split-microsecond accuracy unknown in his time.

The most important practical development of these techniques is radar. We usually think of radar as a system of blind bombing or obstacle detection. Basically radar is a system of time measurement of exquisite precision, and what we see on the scope is only a derivative of what we measured in microseconds. We send out square-shaped pulses, usually of one microsecond duration, pick up the reflection from a target, measure the elapsed time electronically and automatically, convert it into distance, display the result on a tube, and that’s radar.

Used in Navigation Aids Another application of microsecond technique is the Loran navigation system (PS, Feb. ’46, p. 78). Like radar, it uses rectangular pulses, but they are transmitted on a comparatively long wave length from a number of widely separated locations. Thus they cover a much greater range than radar, which, like television, is limited to the optical horizon. The method is to measure the time of transmission from each transmitter and thus to obtain a fix by triangulation. The individual pulses are relatively longâ€”about 40 microsecondsâ€”but it is a split-microsecond technique, for the transmitters are synchronized to within 0.5 microsecond.

Another field for pulse-transmitting devices lies in guided-missile control. The problem here is to feed data to a built-in . radio receiver, which will guide the missile to a target. Continuous waves may be used for this purpose, but pulse control offers the advantage of coding, so that the receiver will respond only to friendly emissions and the enemy will be unable to take over control of the missile for his own ends.

Guided-missile applications are only in the experimental stage, but another field, that of industrial controls, was already highly developed before the war and now stands to benefit by the advances of radar and allied techniques. The devices used are manifold, but their common purpose is to supply self-correcting means in industrial processing in place of imperfect manual controls.

A typical problem is automatic register control in the printing industry. One solution involves the use of a phototube that detects any misregister and promptly triggers a square-wave circuit, which in turn operates a correcting motor. One of these devices will control a large printing press at any speed between 300 and 1,000 feet a minute, and maintain register to within a thousandth of an inch at all times.

High-speed photography is also a field in which microsecond timing is required. One system uses microflash bulbs fired by a control circuit with a period of about two microseconds. This is not the lower limit: the GE General Engineering and Consulting Laboratory is reported to have a fully automatic camera, with a speed of one microsecond, which produces a finished transparency within 30 seconds; the Navy has another type, utilizing a Kerr cell as the shutter, for which a speed of 0.04 microsecond is claimed.

In the development of the atomic bomb, X-ray photographs were made using high-voltage pulses to create peak currents as high as 2,000 amperes, but lasting only a microsecond or so. These devices are used for observation of machinery in motion, the passage of bullets through gun barrels, and for the study of motion that can be recorded only by microsecond techniques.

Particle accelerators used in atomic research may in one respect be considered microsecond devices. Whether the particles move in linear or closed paths, they must be kicked ahead electrically at the right intervals. At the high speeds at which they move, this normally involves microsecond timing. In the FM cyclotron, for example, the particles circle the chamber at the rate of 0.1 microsecond for a single revolution, and the timing of the accelerating impulses must be of the same order.

A final example takes us back into the field of radio communication. It is the system of multiplexing, or sending several messages simultaneously over a single circuit. Its complexity is one of its advantages. In military use, for which it was originally developed, it affords a high order of security precisely because it involves a complex interlacing of pulses on which it is difficult to eavesdrop. The underlying principle, how ever, is simple. Even the shortest single sound of speech or music is comparatively long. It lasts for thousands of microseconds. Why, then, once we have learned how to divide time into microsecond slices, must we send all of a given sound over a circuit on which time represents money?

Sampling Sections of Sound All we need to do is to listen to small sections of the sound for a fraction of a microsecond, and all the information in the original wave will be retained. Moreover, by that method we can sample a number of conversations or musical renditions and send them over the same circuit simultaneously.

The military version of this ingenious system was developed by the British, the U. S. Army Signal Corps, RCA, and Bell Telephone Laboratories. It has eight two-way telephone channels that can also serve as telegraph or facsimile channels. Bell is now using this type of equipment in several civilian installations, such as the one linking Catalina Island to the California mainland.

A similar system developed by International Telephone and Telegraph is capable of accommodating eight broadcast channels on a single frequency, with only one transmitting and one receiving antenna. Such microsecond technique may provide economical radio reception in hotels and institutions.

How do they split seconds into a million or more pieces? For transmission and control it is done by means of pulse-generating. circuits. Some of these generate square or peaked waves directly, while others start with a standard vacuum-tube oscillator producing the conventional sine wave and distort it into a series of square-shaped pulses. This is done by overloading the tubes, and is called the brute-force method. Using crystal-control, such circuits can be stabilized with microsecond accuracy.

For reception and measurement, cathode-ray oscilloscopes are used. In a cathode-ray tube electrons fly out of the cathode and are focused into a beam that makes a spot of light on a fluorescent screen. Deflecting apparatus in the throat bends the beam when a suitable voltage is applied. Amplitude (voltage or current) is represented on the face of the tube by vertical distances, time by horizontal distances. The voltage that produces the horizontal movement is called a time base and the circuit that produces the voltage is called a sweep circuit. A cathode-ray ‘scope may have a sweep of 20 inches per microsecond.

Accuracy depends largely on the frequency standards available. The Bureau of Standards has a number of transmitters constantly on the air to provide a check. Its primary frequency standards are accurate to. better than one part in ten million. Its broadcast time signals are constantly compared with absolute time data from the U. S. Naval Observatory. Some of its equipment will measure a rate of change equivalent to one second in 50 years. This remarkable accuracy can be plucked out of the air for nothing.