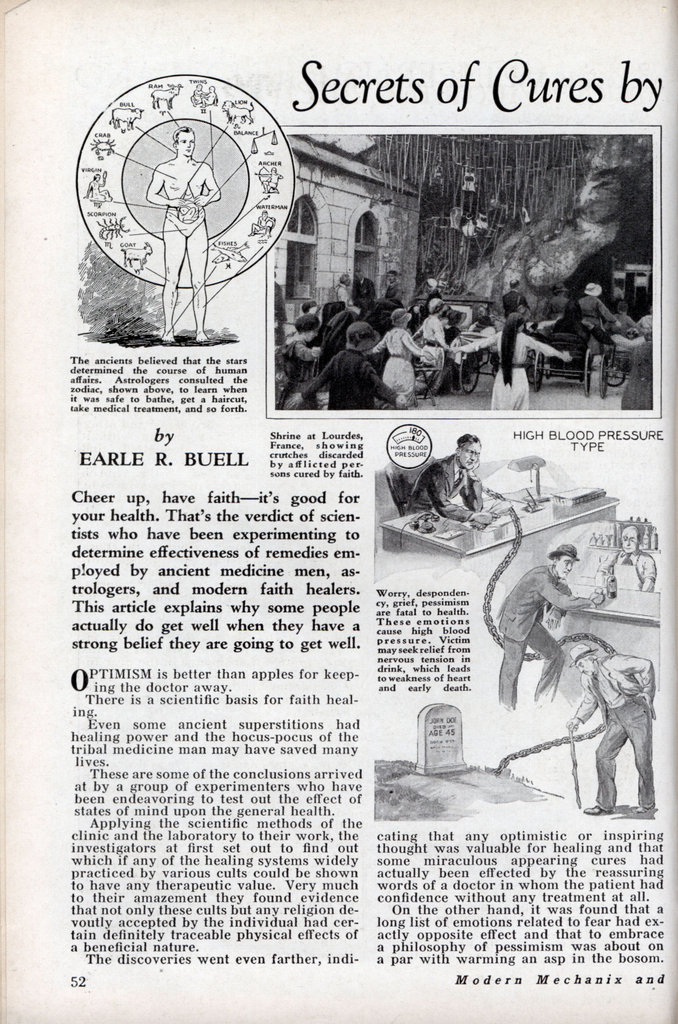 Cheer up, have faithâ€”it’s good for your health. That’s the verdict of scientists who have been experimenting to determine effectiveness of remedies employed by ancient medicine men, astrologers, and modern faith healers. This article explains why some people actually do get well when they have a strong belief they are going to get well.

OPTIMISM is better than apples for keeping the doctor away. There is a scientific basis for faith healing.

Even some ancient superstitions had healing power and the hocus-pocus of the tribal medicine man may have saved many lives.

These are some of the conclusions arrived at by a group of experimenters who have been endeavoring to test out the effect of states of mind upon the general health.

Applying the scientific methods of the clinic and the laboratory to their work, the investigators at first set out to find out which if any of the healing systems widely practiced by various cults could be shown to have any therapeutic value. Very much to their amazement they found evidence that not only these cults but any religion devoutly accepted by the individual had certain definitely traceable physical effects of a beneficial nature.

The discoveries went even farther, indicating that any optimistic or inspiring thought was valuable for healing and that some miraculous appearing cures had actually been effected by the reassuring words of a doctor in whom the patient had confidence without any treatment at all.

On the other hand, it was found that a long list of emotions related to fear had exactly opposite effect and that to embrace a philosophy of pessimism was about on a par with warming an asp in the bosom.

Instead of being able to find out which sect was nearest to the truth as had been intended, experimenters found that truth or falsity of a sincere belief seemed to make no appreciable difference in its curative effect. This gave rise to the realization that countless supposedly silly superstitions had probably improved the health of those who believed in them.

As a result, there arises the possibility of testing the sincerity of religious convictions by means of the blood pressure gauge and other instruments and, while it is not suggested that these instruments will be installed at the church altars, there is said to be ample evidence that positive results could be obtained by this means. The findings of the experimenters have dovetailed to a large extent with those of Dr. William S. Sadler of Chicago University, although the experimenters were without a knowledge of Dr. Sadler’s works, and they are taken to be mutually corroborative.

They are said also to be in line with the prophecy of Dr. Charles P. Steinmetz, famous physicist, who shortly before his death predicted that science in the near future would turn to spiritual matters and that developments in this field would be similar to those in the physical and material realm.

One of the more remarkable discoveries recently made is that there is apparently a scientific basis for the healing principles of faith, hope and charity or love as described in the Bible and it is indicated that any inspiring writings and the encouraging or uplifting words of any admired or revered speaker may be sufficient to effect rather startling cures in some instances.

The time may very well come when a doctor’s prescription will read: “See your priest, minister or other religious adviser.” Public intuition has for some time been directing large numbers of persons back to their churches for physical as well as mental and spiritual assistance, it is said, and a period of increased interest in the church is prophesied.

Beginning first with a study of religious healing and recognizing the fact that savage races since the beginning of history have looked to their medicine men both for religious guidance and physical healing, experimenters have followed the course of healing through the story of many religious sects to the present day.

They found that belief in faith healing or prayer cures had never died out though it had often fallen into disrepute. In studying the superstitions of other days, they found many that dealt with healing and came to the conclusion that even the most ridiculous might effect cures if completely accepted by the patient.

That some of these must, however, have severely taxed the credulity of the individual, is indicated by some of the superstitions studied.

A cure for warts and corns was found which required the patient to lie on his back along a boundary line on the twentieth day of the month with the hands extended over the head. With whatever thing could be grasped while so doing, he was to rub the warts and they would immediately disappear.

Corns were to be cured by watching for a shooting star and, on seeing one, immediately pouring vinegar upon the hinge of a door.

For headache, the patient was instructed in one instance to tie about the forehead a piece of rope used previously for the hanging of a criminal.

The eye of a wolf rubbed upon a diseased human eye was one of the superstitious cures for eye trouble.

A prescription for stomach ache called for the removal of the heart of a living lark and its being worn on the left thigh.

Epileptics were instructed to gather peonies at night when the moon was on the wane and, wrapping them in linen, to wear them as an amulet. A nail from a cross, removed and suspended about the neck, was another prescription for the epileptic.

Since some forms of epilepsy have been listed as highly curable under the new system, it is pointed out that this superstition may have produced many actual cures in spite of the ridiculous nature of the instructions.

A difficulty encountered is the fact that practically all minor ailments, most physical injuries and a considerable number of serious physical disorders generally end in recovery of the patient. It was this fact that convinced the savage that his medicine man had supernatural powers and it still operates to convince the followers of modern cults of miraculous cures.

Experimenters delving into the subject, taking account of the fact that most persons recovered from their ills in time, set out to learn whether the followers of healing cults recovered more rapidly than the non-believers and their experiments are said to have borne out the belief that they do.

To discover the reason for this, a study of general physical effects traceable to purely mental or spiritual causes was undertaken. It was noted at once that fright quickened the heart beat, that worry upset the digestion, that envy, jealousy and hatred affected nerves, glands and blood vessels.

This indicated that there were certain emotions that could be tabulated as harmful. Among these were: pessimism, dissatisfaction, grief, alarm, timidity, anxiety, despondency, suspicion, hatred, worry, cowardice, anger, moroseness, remorse, vacillation, selfishness, envy, jealousy.

These, upon analysis, were found to be merely different forms of fear, selfishness or discouragement. For a working hypothesis it was considered that these harmful emotions generated through the glands, blood stream or other physical agencies of the body a sort of poison which caused illness or a predisposition to illness.

Leaving to the doctors the problem of finding an antidote for the poisons, an effort was made to find antidotes for the harmful emotions and this proved easier. The beneficent emotions were soon listed to include: optimism, satisfaction, happiness, confidence, assurance, trustfulness, hopefulness, certainty, love, cheerfulness, courage, patience, enthusiasm, conscientiousness, determination and the like.

To build up faith or trust, to inspire hope, to inculcate charity or love as an antidote to selfishness and envy, it was found necessary to bring to the patient some authority of a philosophical or religious nature. In general religion was believed to be the most powerful agent although anything of an inspirational nature was found valuable.