Mechanix Illustrated
Issue: May, 1956
Posted in: Crime and Police
Tags: Secret Service
No Comments on SECRETS OF THE HUSH-HUSH BOYS (May, 1956) 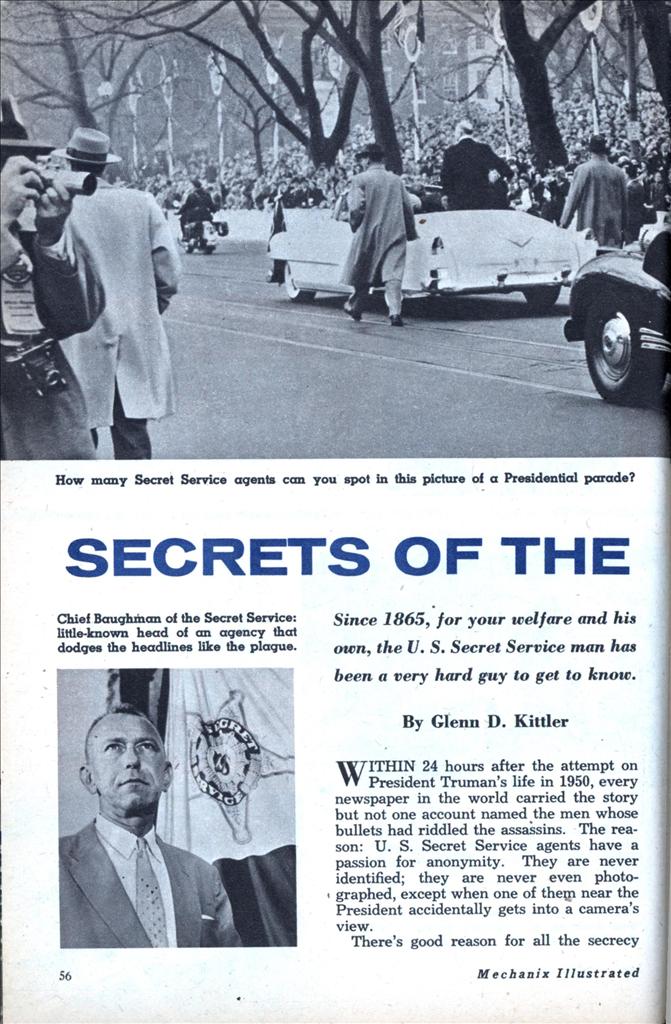 SECRETS OF THE HUSH-HUSH BOYS

Since 1865, for your welfare and his own, the U. S. Secret Service man has been a very hard guy to get to know.

WITHIN 24 hours after the attempt on President Truman’s life in 1950, every newspaper in the world carried the story but not one account named the men whose bullets had riddled the assassins. The reason: U.S. Secret Service agents have a passion for anonymity. They are never identified; they are never even photographed, except when one of them near the President accidentally gets into a camera’s view.

There’s good reason for all the secrecy about the Secret Service. Since its beginning it has been a small agency with a very big job. Each year the SS puts more bad guys in the Federal pokey than any other agency, including the FBI— and there are only 225 SS agents in the country. The SS men keep this record up to date by being completely unknown —especially to the wrong-minded citizens who try to coin their own money or to steal government securities.

Secret Service men are masters at “roping”—posing as gang members to collect evidence. While roping they have no contact with local police and as little as possible with fellow agents.

This is dangerous work; yet the agents hardly ever carry guns because this would mark them as law men. Real underworld operators avoid arrest for carrying concealed weapons by the simple strategy of not carrying them.

One agent recently found himself in a tight spot while breaking up a gang of Pittsburgh counterfeiters. A former Pittsburgh cop, his assignment had led him back to his home town. After weeks of shrewd maneuvering he got himself invited to the gang’s farm house hangout. There one of the gang’s women spotted him.

“You’re a cop,” she said in front of everybody. “I’ve seen you around police headquarters.”

The agent forced a laugh. “I’m told that every time I come to Pittsburgh,” he said as easily as he could. “But believe me, you’re thinking of somebody else. There’s a cop at headquarters I look like. I’ve checked up on him.” He fingered his upper lip. “We’ve got the same kind of mustache. I’d better shave mine off.”

The ruse worked. By then, the agent had all the evidence he needed. Next day he led a raid on the farm house and captured the gang. At police headquarters the gang leader told him: “You don’t know how close you come to getting killed last night.”

Shortly afterward the agent shaved off his cookie duster.

Another agent had so successfully roped his way into a Boston gang that other members of the outfit offered to cut him in on a deal to swindle the head man out of $25,000. In Philadelphia a counterfeit gang agreed to give a roping agent a sizeable amount of fake money for rubbing out another gangster.

In 1865, when any bank could issue its own money and currency could be easily imitated, one-third of the money in circulation was fake. On July 5 of that year, William P. Wood, keeper of the Capitol Prison, was sworn in by Secretary of the Treasury Hugh McCulloch as the first chief of the United States Secret Service with the immense task of stopping the flood of counterfeiting.

Wood’s men did their job so successfully that other government agencies borrowed them. During the Spanish-American War, the Department of Justice asked the Secret Service to locate the ring of Spanish spies who were raising espionage havoc in the U.S. Agents unearthed the spy headquarters in Montreal and smashed the ring.

Secret Service agents also broke up the land-grab frauds at the turn of the century, through which crooked cattle barons swindled millions of acres from the government by vising dummy entry-men’s names on homesteading grants. Later agents captured high-powered German World War I spies and they uncovered all the evidence which exposed the Teapot Dome oil scandals.

Keeping Secret Service agents particularly busy these days are thousands of government check and bond thefts. One of the busiest bond thieves was known as Funeral Ben. Ben picked his victims from obituary pages. When he knew the deceased’s family would be at the funeral Ben broke into the house, hunted out the bonds and the necessary identification papers and headed for the bank. Agents were practically at the door of Ben’s Kalamazoo home when he tripped up by trying to cash a bond at a bank where his deceased victim was known. Breaks like that are rare.

Last year, $102,200 in counterfeit bills was passed on the public; Secret Service Agents captured another $1,250,000 before it could be circulated. The alert- ness of agents is evidenced in the fact that the amount of counterfeit money passed in recent years has diminished steadily since its 1950 peak of $735,127.

However, counterfeiting American money abroad still remains a threat. Not long ago U.S. agents captured $2,000,000 in phony $10 bills at Marseilles, France, just as it was about to be dumped on the European black-market where American money is the only accepted pay-off. American agents also broke up a European ring that had so skillfully counterfeited British currency that the only defense left for Great Britain was to recall existing folding money and completely change the art work on the new issues.

Like the Bureau of Narcotics, the Secret Service is under U. S. Treasury Department jurisdiction. All prospective Treasury Department agents must meet the same Civil Service requirements and tests, and those who pass are then hand-picked for specific agencies.

To qualify for the Secret Service, a man must have a college degree or a year’s experience at such investigative jobs as claims adjusting, law, surveys, government regulations or police work.

Applicants must pass such stiff physical and mental examinations that most appointments go to younger men. Of more than 1,000 qualified applicants who recently took the tests in New York, only 100 passed. Successful applicants then go on a waiting list, filling openings in field offices as they arise. They spend a year on the job, learning how the Secret Service works and studying a long list of books on law, government regulations and detection. Men who pass tests on this material are then sent to the Secret Service School in Washington.

Here they learn judo, self-defense, first-aid, fire-fighting, the use of small arms, detection,” law enforcement, and take recently added courses on atomic, biological and chemical warfare. At the U.S. Mint and Bureau of Engraving they learn all they must know about U.S. Currency. Men slated for the White House Detail are given extra training in the protection of the President.

The Secret Service has been responsible for the safety of Presidents since the assassination of President McKinley in 1901. At the time, three Presidents— Lincoln, Garfield, McKinley—had been killed in 37 years, an international record.

Regulars on the White House Detail have special aptitudes for the job. They are usually between 25 and 35 years old, well-built and with a personal appearance that will not stop a clock or female traffic. They must be at ease wearing tails at a White House reception or blue jeans on Eisenhower’s farm. With utmost tact, they must be able to question * strangers and check on visiting foreign dignitaries without offending them.

When President Eisenhower appears to be fishing alone in a Colorado stream, Secret Service men are posted along both banks of the river and scattered through the surrounding wilderness. When he golfs, agents are at his heels, their shotguns hidden in the golf bags they carry; they are also ahead of him and spaced out across the entire course.

Wherever he drives, agents are in the car with him, in cars ahead and behind, and on roof tops and in the throngs along the route. They inspect his plane before he takes off and when he lands; both airports get a thorough inspection. Agents are on any trains he may take, on the dummy train which immediately precedes it (in case of booby-traps on the tracks), and in any stations he may walk through.

Should the President be scheduled to make a public speech, the auditorium gets a complete going-over beforehand and agents are at strategic posts while he is in it. Any food he will eat is first inspected and it does not leave an agent’s sight until the President eats it.

Any hotel or house where he may spend the night is checked in the most minute detail, and should agents decide the set-up’ offers the slightest obstacle to their job of protecting the President, other quarters are selected.. In and out of the White House, any new item or person to get near the President must first have Secret Service okay.

White House men have to keep up with Presidential vagaries. In Geneva, when Eisenhower decided to break through a crowd to buy gifts in a toy shop, agents had to fight the mob to throw a cordon around him. President Roosevelt’s frequent surprise decision to visit a war plant the next day would keep agents up all night, checking the factory and workers.

Whatever the job—guarding the President, pursuing counterfeiters, tracking down forger’s, thieves or swindlers, the U. S. Secret Service men have for more than 90 years kept at the task, relentlessly, ceaselessly, successfully. Chief Baughman has said: “A good Secret Service agent must be a dedicated man.”

Fortunately for the rest of us, all of them are.