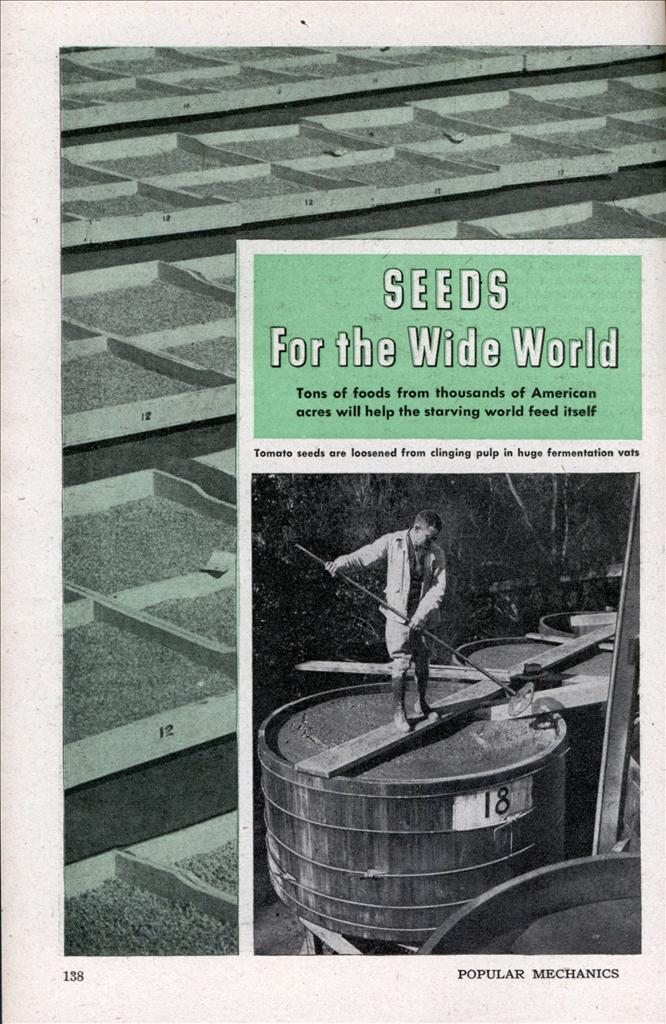 SEEDS For the Wide World

Tons of foods from thousands of American acres will help the starving world feed itself PEOPLE in many parts of the world will eat better vegetables because of vast quantities of top quality vegetable seed the United States has furnished Europe, India, China and the South Pacific as part of its war and rehabilitation efforts.

Succulent red tomatoes, tasty melons, crisp carrots, juicy beets and a dozen other high grade vegetables of disease-resistant varieties are being grown today in regions that used to depend on poor, native-bred strains. Some of the vegetables common in this country were completely unknown in these areas until now.

The excellence of American vegetables is the result of scientific breeding for sturdiness, size, taste, coloring and resistance to diseases. For years Europe has purchased the seed for its favorite brown head lettuce in California, for the climate on the continent is too uncertain for lettuce seeds. Similarly, England buys much of its onion seed in California. The onions flourish in England but the climate there is too cool for good seed production.

Normally the United States produces about 130 million pounds of pea, bean, corn and other large seeds and about 70 million pounds of the smaller vegetable seeds. This production was tripled and quadrupled during the war. It is much better to ship seed abroad, to be raised into edible crops, than to transport bulkier food. Early in the war such increases in production didn’t seem possible because most seed harvesting jobs were done by hand labor, and hand labor was rapidly disappearing from the farms as the busy war plants beckoned. Leaders in the industry turned to mechanization and devised new types of automatic equipment for harvesting.

One type of thresher developed by Ferry-Morse speeds the harvesting of seed from cantaloupes, cucumbers, pumpkins, squashes and watermelons. The thresher smashes the melons by means of ribbed cylinders and then throws the pulp inside a large rotating screen. The seeds and a small amount of pulp fall through the screen into sacks while the rinds and the balance of the pulp are discharged. The sacked seeds go to a mill for washing and drying.

The latest thresher, adapted from Army equipment, is built on a 1-1/2-ton four-wheel-drive truck chassis and uses hydraulic pressure supplied by its engine to operate hydraulic motors that turn the conveyors, cylinders and drums.

Head lettuce won’t go to seed unless the mature heads are chopped open to allow the seed stalks to push their way through. Once done by field labor, now a mechanical header with rotating disk blades is drawn down the rows, slicing open the heads of lettuce as it moves. After the seed stalks have matured, a mechanical harvester cuts them down and dumps them into a trailer for hauling to the drying sheets.

One new piece of equipment is a “land planer” that shaves the ground to billiard-table smoothness. Most fields have slight hills and valleys that cause a drill seeder to plant some seed too deep and some too shallow. The land planer is a tractor-drawn iron framework 12 feet wide and 60 feet long, with a wide scraper blade at its center. Its long wheel-base permits the scraper blade to remove slight rises in the ground and to fill in depressions.

Chemical weeding has replaced most hand weeding of narrow-leafed seed crops. Sprays of light stove oil, as much as 100 gallons per acre, kill 80 percent of the early weeds in such crops as carrots, parsnips and parsley.

One of the largest producers of vegetable seed in the world raises nearly 500 separate varieties of 50 different vegetable seeds on 50,000 acres in California and other states. Some seeds are almost microscopic in size, others are as large as your thumbnail. Each is a separate problem to the mill men who must remove all chaff, stems, dirt, weed seeds and other field debris. Seeds from any of approximately 3000 weeds may need to be removed.

Three types of separation machines are used for most seeds. Fanning mills employing air pressure blow away chaff, light seeds and dust. Next, vibrating screens allow the seed to fall through while trapping all larger material. The final step, usually, is a gravity mill that has a rapid up and down and sideways motion. An air blast from underneath the deck keeps the seed in partial suspension as it jogs and bounces along. The heavy seeds slowly concentrate at one side of the table and the lighter seeds, chaff and dirt are carried off at the other side.

Good onion seed is separated easily in water. The onion seed sinks and the chaff and light weed seed can be skimmed off. Beet seed is cleaned by a “hill climber” machine resembling a mechanical laundry ironer. Beet seeds roll down the canvas or rubber belt and are collected in a hopper while sticks, chaff and some weed seeds are carried away.

Tomato seeds are embedded in pulp, hence they cannot be cleaned by any of these methods. Ripe tomatoes are broken up and placed in a large rotating screen that retains the skins and most of the pulp, allowing the tomato seeds and the pulp that clings to them to fall through. This material is fermented in large vats for several days. After fermentation has loosened the seeds from the pulp the material is flowed down long sluice boxes similar to those used by placer miners in extracting gold from river sands. The seeds sink and are caught behind riffles in the bottom of the sluice box.

Ferry-Morse keeps ‘a constant check on the quality of its seeds at laboratories in San Francisco and Detroit, trial grounds at Salinas, Calif., and a greenhouse and test garden near Rochester, Mich. A sample from each shipment of seeds goes to the nearest laboratory where it is checked for noxious weed content. Garden pea, cabbage, corn and tomato seed receive disinfecting treatment to protect them against ground rot after they have been planted.

The laboratory also makes germination tests of each shipment, in some cases placing a sample of freshly harvested seed in an icebox for several days to duplicate the winter cold weather effect. A number of the seeds then are placed on moist sterile blotters and germinated under controlled conditions of light and heat.

Similar tests are made of samples from each batch of seed after the milling and cleaning operations and again just before the seed is packaged. All lots of seed receive germination tests every five months as long as they are in storage.

Meanwhile, samples of seed are planted at the Salinas and Rochester trial grounds and the plants are checked for size, quality and trueness to type.