I thought about putting this in the Origins category since it is clearly the progenitor of Skeletor. 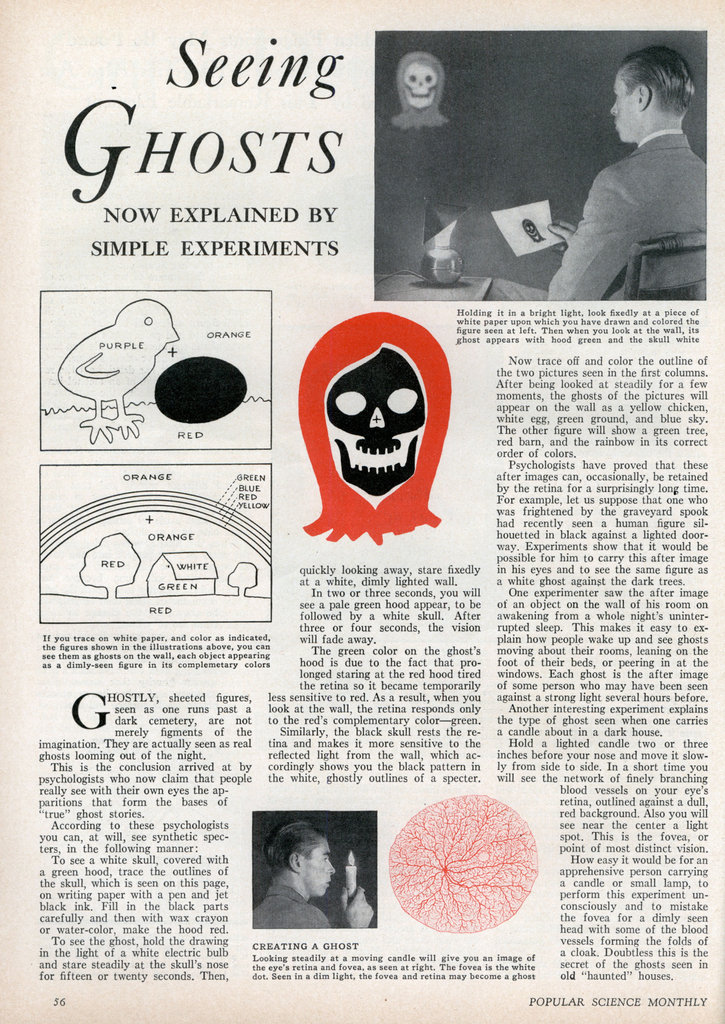 GHOSTLY, sheeted figures, seen as one runs past a dark cemetery, are not merely figments of the imagination. They are actually seen as real ghosts looming out of the night.

This is the conclusion arrived at by psychologists who now claim that people really see with their own eyes the apparitions that form the bases of “true” ghost stories.

According to these psychologists you can, at will, see synthetic specters, in the following manner:

To see a white skull, covered with a green hood, trace the outlines of the skull, which is seen on this page, on writing paper with a pen and jet black ink. Fill in the black parts carefully and then with wax crayon or water-color, make the hood red.

To see the ghost, hold the drawing in the light of a white electric bulb and stare steadily at the skull’s nose for fifteen or twenty seconds. Then, quickly looking away, stare fixedly at a white, dimly lighted wall.

In two or three seconds, you will see a pale green hood appear, to be followed by a white skull. After three or four seconds, the vision will fade away.

The green color on the ghost’s hood is due to the fact that prolonged staring at the red hood tired the retina so it became temporarily less sensitive to red. As a result, when you look at the wall, the retina responds only to the red’s complementary colorâ€”green. Similarly, the black skull rests the retina and makes it more sensitive to the reflected light from the wall, which accordingly shows you the black pattern in the white, ghostly outlines of a specter.

Now trace off and color the outline of the two pictures seen in the first columns. After being looked at steadily for a few moments, the ghosts of the pictures will appear on the wall as a yellow chicken, white egg, green ground, and blue sky. The other figure will show a green tree, red barn, and the rainbow in its correct order of colors.

Psychologists have proved that these after images can, occasionally, be retained by the retina for a surprisingly long time. For example, let us suppose that one who was frightened by the graveyard spook had recently seen a human figure silhouetted in black against a lighted doorway. Experiments show that it would be possible for him to carry this after image in his eyes and to see the same figure as a white ghost against the dark trees.

One experimenter saw the after image of an object on the wall of his room on awakening from a whole night’s uninterrupted sleep. This makes it easy to explain how people wake up and see ghosts moving about their rooms, leaning on the foot of their beds, or peering in at the windows. Each ghost is the after image of some person who may have been seen against a strong light several hours before. Another interesting experiment explains the type of ghost seen when one carries a candle about in a dark house.

Hold a lighted candle two or three inches before your nose and move it slowly from side to side. In a short time you will see the network of finely branching blood vessels on your eye’s retina, outlined against a dull, red background. Also you will see near the center a light spot. This is the fovea, or point of most distinct vision. How easy it would be for an apprehensive person carrying a candle or small lamp, to perform this experiment unconsciously and to mistake the fovea for a dimly seen head with some of the blood vessels forming the folds of a cloak. Doubtless this is the secret of the ghosts seen in old “haunted” houses.