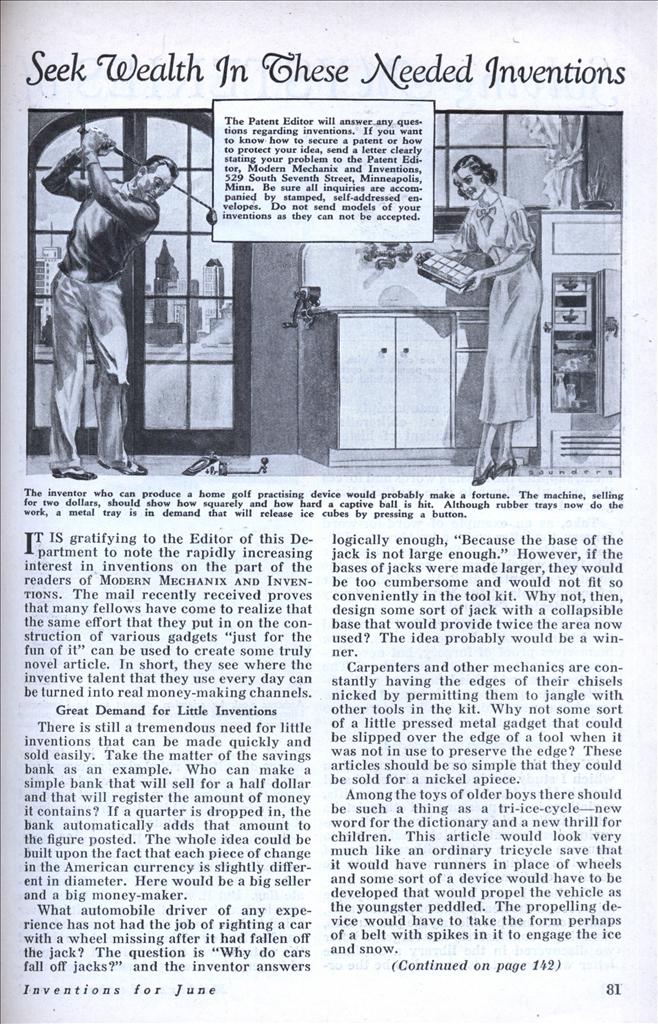 Seek Wealth In These Needed Inventions

IT IS gratifying to the Editor of this Department to note the rapidly increasing interest in inventions on the part of the readers of Modern Mechanix and Inventions. The mail recently received proves that many fellows have come to realize that the same effort that they put in on the construction of various gadgets “just for the fun of it” can be used to create some truly novel article. In short, they see where the inventive talent that they use every day can be turned into real money-making channels.

There is still a tremendous need for little inventions that can be made quickly and sold easily. Take the matter of the savings bank as an example. Who can make a simple bank that will sell for a half dollar and that will register the amount of money it contains? If a quarter is dropped in, the bank automatically adds that amount to the figure posted. The whole idea could be built upon the fact that each piece of change in the American currency is slightly different in diameter. Here would be a big seller and a big money-maker.

What automobile driver of any experience has not had the job of righting a car with a wheel missing after it had fallen off the jack? The question is “Why do cars fall off jacks?” and the inventor answers logically enough, “Because the base of the jack is not large enough.” However, if the bases of jacks were made larger, they would be too cumbersome and would not fit so conveniently in the tool kit. Why not, then, design some sort of jack with a collapsible base that would provide twice the area now used? The idea probably would be a winner.

Carpenters and other mechanics are constantly having the edges of their chisels nicked by permitting them to jangle with other tools in the kit. Why not some sort of a little pressed metal gadget that could be slipped over the edge of a tool when it was not in use to preserve the edge? These articles should be so simple that they could be sold for a nickel apiece.

Among the toys of older boys there should be such a thing as a tri-ice-cycle—new word for the dictionary and a new thrill for children. This article would look very much like an ordinary tricycle save that it would have runners in place of wheels and some sort of a device would have to be developed that would propel the vehicle as the youngster peddled. The propelling device would have to take the form perhaps of a belt with spikes in it to engage the ice and snow.

Those who have tried to bevel edges uniformly with a plane would appreciate a little attachment for such tools that would prevent a workman from taking too large a cut and that would not only bevel the edge at the proper angle but also remove only a predetermined amount of wood.

There is needed an attachment for a three-jawed lathe chuck to make the chuck accommodate square rod. The attachment should be cheap; say two or three dollars. The object of the invention would be to make the cost of a fou»r-jawed chuck unnecessary for the small workshop.

The man who can invent a method or a device that will prevent sole rubbers from slipping off the feet will find himself in possession of a fortune in no time. Hundreds of thousands of people would wear rubbers of this type if they could be sure that they would stay in place.

The erasers on the end of lead pencils do not last as long as the pencil itself on the average. One large fortune was made in placing the rubber on the end of the pencil and now another fortune awaits the man who can equip the lead pencil with a longer rubber with a method of feeding it as it wears away.

There is a need for a fountain pen that will register the amount of ink it contains without the pen being transparent.