At a current value of $362 I’m pretty sure you could just get a human answering service for considerably less money. 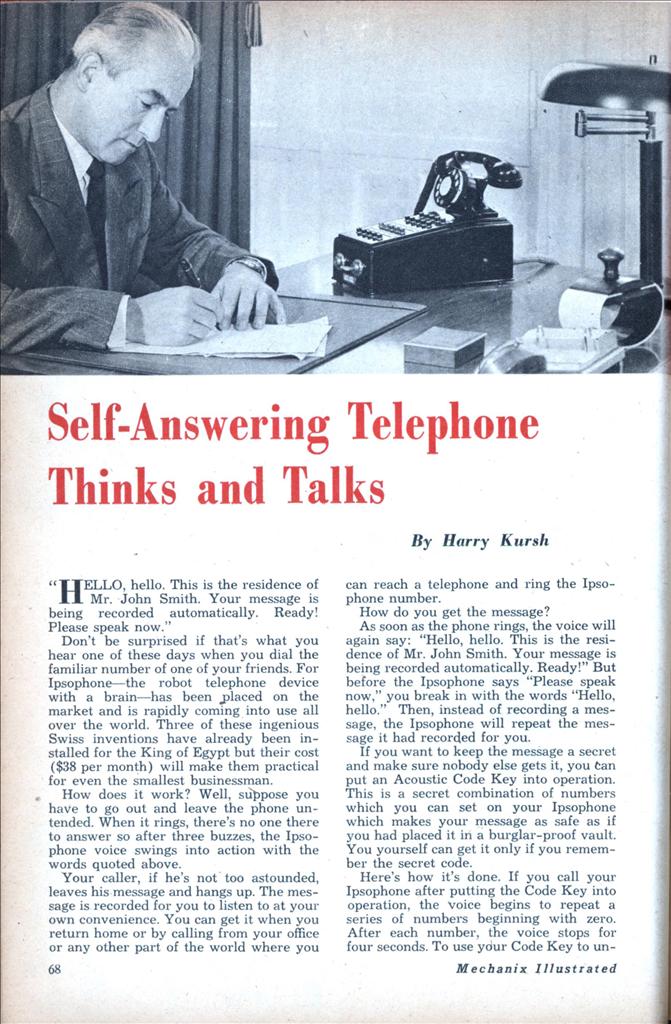 “HELLO, hello. This is the residence of Mr. John Smith. Your message is being recorded automatically. Ready! Please speak now.”

Don’t be surprised if that’s what you hear one of these days when you dial the familiar number of one of your friends. For Ipsophone—the robot telephone device with a brain—has been placed on the market and is rapidly coming into use all over the world. Three of these ingenious Swiss inventions have already been installed for the King of Egypt but their cost ($38 per month) will make them practical for even the smallest businessman.

How does it work? Well, suppose you have to go out and leave the phone un-tended. When it rings, there’s no one there to answer so after three buzzes, the Ipsophone voice swings into action with the words quoted above.

Your caller, if he’s not too astounded, leaves his message and hangs up. The message is recorded for you to listen to at your own convenience. You can get it when you return home or by calling from your office or any other part of the world where you can reach a telephone and ring the Ipsophone number.

How do you get the message?

As soon as the phone rings, the voice will again say: “Hello, hello. This is the residence of Mr. John Smith. Your message is being recorded automatically. Ready!” But before the Ipsophone says “Please speak now,” you break in with the words “Hello, hello.” Then, instead of recording a message, the Ipsophone will repeat the message it had recorded for you.

If you want to keep the message a secret and make sure nobody else gets it, you tan put an Acoustic Code Key into operation. This is a secret combination of numbers which you can set on your Ipsophone which makes your message as safe as if you had placed it in a burglar-proof vault. You yourself can get it only if you remember the secret code.

Here’s how it’s done. If you call your Ipsophone after putting the Code Key into operation, the voice begins to repeat a series of numbers beginning with zero. After each number, the voice stops for four seconds. To use your Code Key to un- lock the secrets of its brain, you repeat the word “hello” twice after each of the numbers you selected.

If someone else tries to break your code, “Ipsophone disconnects him or gives him a busy signal whenever he says “hello” after the wrong number. Since the Code Key can be changed as often as desired, unauthorized snooping is impossible.

The language used on Ipsophone can be adjusted by the company to accommodate any spoken language. In Switzerland, Ipsophones are already in operation in French and German. Jelmoli department store uses four to record orders for purchases after ordinary business hours. Banks use it to receive important messages after banking hours. The Journal of Geneva has an Ipsophone reserved for messages from its foreign correspondents around the world. Reuters, the British news agency, has an Ipsophone in use in Geneva, too. Doctors are making effective use of it by instructing patients to describe their condition to the Ipsophone in the event they are away from the office. From what the Ipsophone tells the doctors when they return, they are able to determine whether or not there’s an emergency.

Arrangements are under way with an American corporation to mass-produce thousands of Ipsophones because the Swiss company turns out only about 30 a month. And then they are merely leased.

So far, the most difficult (though easily solvable) problem the Ipsophone makers have encountered is caused by the same people who leave their keys under the doormat and then forget where they hid them. They forget their own secret code!