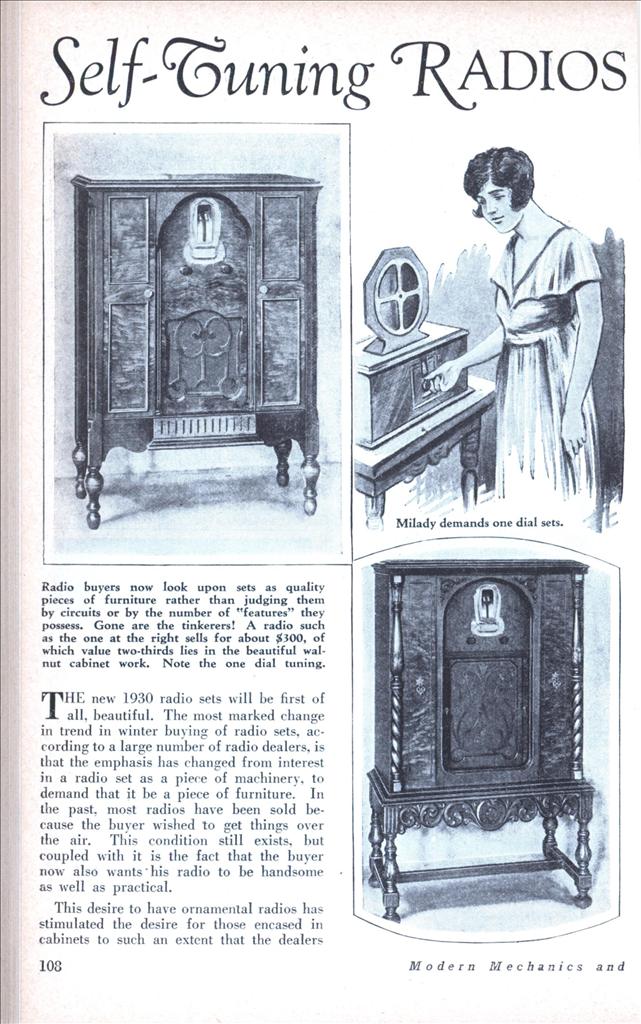 Self-Tuning RADIOS to be Fan’s Choice in 1930

Gone are the tinkerers who used to buy sets. Music with one dial whirl is wanted today. 1930’s sets will carry one dial or automatic tuning to be up to date.

THE new 1930 radio sets will be first of all. beautiful. The most marked change in trend in winter buying of radio sets, according to a large number of radio dealers, is that the emphasis has changed from interest in a radio set as a piece of machinery, to demand that it be a piece of furniture. In the past, most radios have been sold because the buyer wished to get things over the air. This condition still exists, but coupled with it is the fact that the buyer now also wants his radio to be handsome as well as practical.

This desire to have ornamental radios has stimulated the desire for those encased in cabinets to such an extent that the dealers now advertise and sell the so-called console sets to a greater extent than ever before and claim that before long nearly all the sets sold will be of this type.

The women in the families are responsible for this trend, largely. Formerly the man in the family bought the radio set, and did not mind its looks. Also, he might be mechanically minded and liked to tinker with his machine, making all sorts of adjustments himself. But his wife, with less mechanical interest, wanted a set which she could turn on, set at a certain spot and listen to. This of course has simplified the mechanical parts of radio sets. Practically all the 1930 models are one dial sets, with a minimum of dial turning to get the desired station.

The old tinkerer, or radio enthusiast, has not entirely passed away, but he usually has two machines now, dealers say. He keeps his old machine, to play with, adjust, take to pieces and put together again. But he also has another one, or is buying one this winter, which won’t get out of order, and which he can turn on and forget about.

Another growing development in next year’s radio sets is the all electric set, the one which can be plugged into a wall socket. The old fashioned battery set is almost passing out of existence, in the cities and towns which have electricity. Manufacturers are still making a few of them, for use on the farms and in the villages where electricity is not used in the homes, but in the larger cities and towns a battery set can hardly be sold. In a survey made recently among nearly four hundred radio dealers in the middle west, all reported that they sold over 99% all electric sets.