Popular Mechanics
Issue: Jun, 1924
Posted in: General, Sign of the Times
2 Comments on Selling Happiness by the Pound (Jun, 1924) 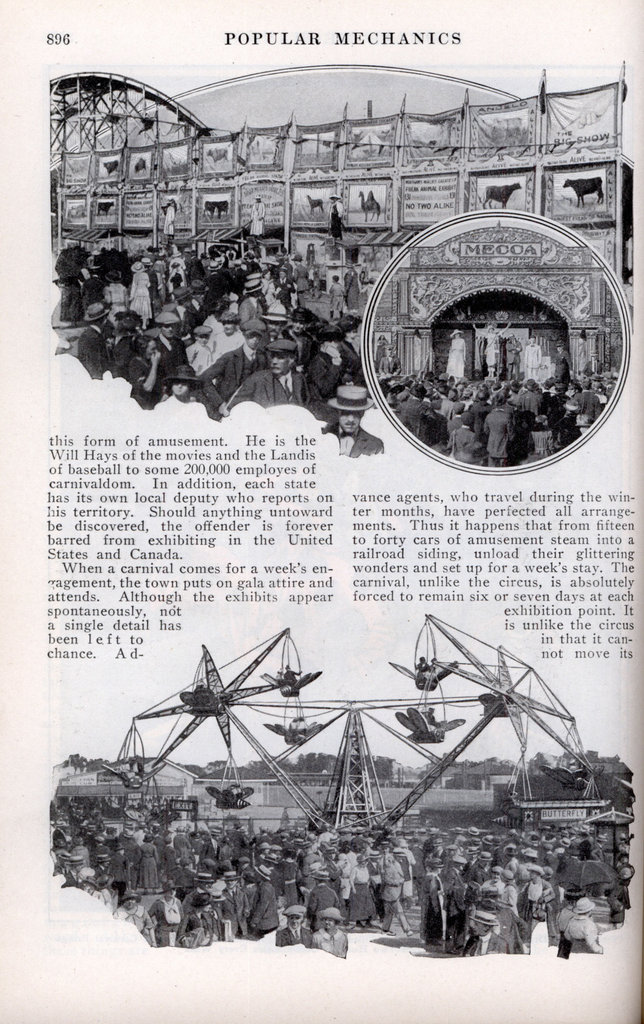 Selling Happiness by the Pound

JOY is sold by the pound throughout the summer and fall by carnivals and traveling amusement expositions in every village, town and city, the length and breadth of the United States and Canada. Happiness is dispensed by them with a consistency akin to that shown by any great business enterprise. Scores of mechanical entertaining devices, thrill- giving rides, glittering midways of “wonders, curiosities and strange people from the four corners of the earth,” and miles of bunting are by no means a matter of chance even if they do appear as though summoned by a magician’s wand. All of these things are the result of organized effort and are available at fixed prices which vary literally according to the weight of the shipment required by any community. A few years ago forty-one carnivals were touring the country. There are over two hundred today. Each one owns it own steel train of double – length cars, and represents an investment of from $20,000 to $300,000. It is now a business in which millions of dollars are invested. Looked at in perspective, the carnival world presents almost as great an undertaking as the motion – picture industry. Like the movies and baseball, it has a censor. Tom Johnson, a Chicago lawyer, is the dictator of this form of amusement. He is the Will Hays of the movies and the Landis of baseball to some 200,000 employes of carnivaldom. In addition, each state has its own local deputy who reports on his territory. Should anything untoward be discovered, the offender is forever barred from exhibiting in the United States and Canada.

When a carnival comes for a week’s engagement, the town puts on gala attire and attends. Although the exhibits appear spontaneously, not a single detail has been left to chance. Advance agents, who travel during the winter months, have perfected all arrangements. Thus it happens that from fifteen to forty cars of amusement steam into a railroad siding, unload their glittering wonders and set up for a week’s stay. The carnival, unlike the circus, is absolutely forced to remain six or seven days at each exhibition point. It is unlike the circus in that it cannot move its many complicated riding devices and make money when it stays a shorter period.

Usually these amusements are conducted upon the community plan. The various rides, shows and concessions are all owned by separate individuals, who in turn are responsible to the general manager. Each owner pays his own help, own electric-light bills and boards himself as well as those employed by him. Every night the profits of the day are turned over to the treasurer, who at the end of the week, after deducting various expenses such as ground rent, pays each individual his share.

Just a few years ago, the carnival loaded its paraphernalia onto freight and box cars. Then it was the duty of the ad-vance agent to have wagons and horses ready to transfer the properties to the grounds. This was known as “gilling.” Today, the carnival carries its own baggage horses, wagons and, generally, two or three tractors. The wagons roll up on the fiat cars, circus-fashion, and are unloaded the same way.

Such thrills as riding a ferris wheel, an aeroplane swing, or a caterpillar could never be experienced in the average city and town, were it not for the carnivals. They bring, direct to the doorstep of everyone, that first wonderful sensation that comes from mounting high in the air and being whirled about at record speed. A trip along the midway takes one through a replica of “King Tut’s Tomb;” lets you shake hands with midgets; peer up at tremendous live giants; have your fortune told; take a ”trip to Mars”; see yourself in innumerable odd-shaped mirrors; enjoy the wonders of “the crazy house,” consisting of falling stairs and undulating floors, or go whirling about on “the whip,” and a multitude of other mechanical aids to happy laughter.