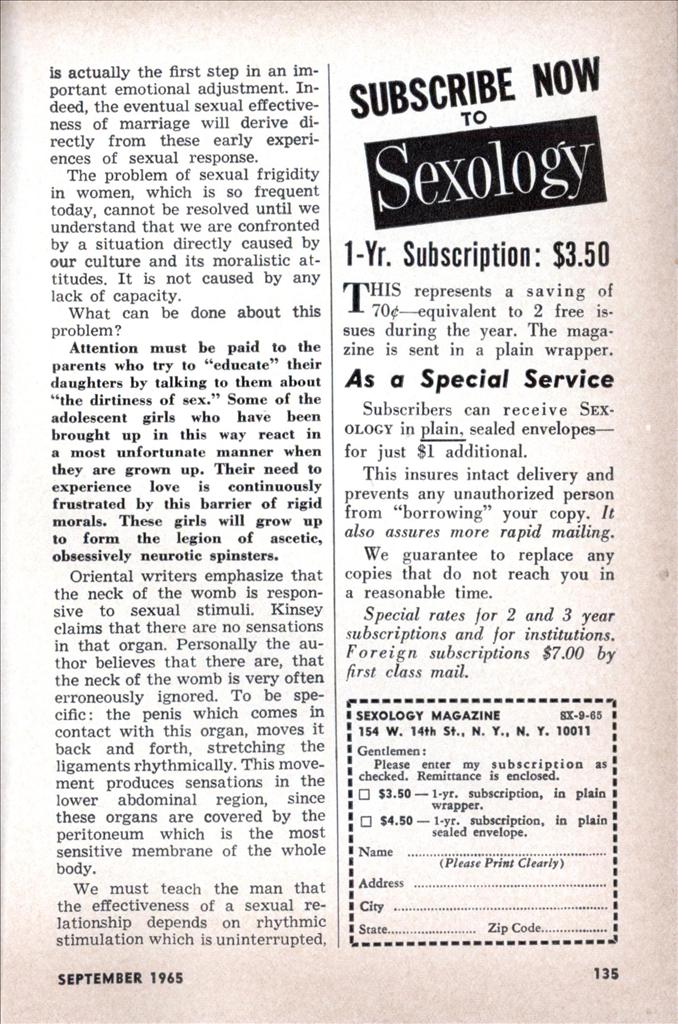 The failure of a woman to achieve orgasm is usually termed “sexual frigidity.” This term is not adequate. There is actually no such thing as a lack of ability to achieve orgasm, only a difference in sexual sensitivity.

There are case histories of women who have lived with several husbands before achieving their first orgasm. If they had been questioned earlier, they would have been diagnosed as frigid. But their subsequent orgasms showed that they were perfectly normal.

Some marriage manuals claim that feminine response depends mainly upon the effectiveness of the sexual caresses and techniques used by the male — techniques which he is very frequently apt to neglect. These manuals stress that the success or failure in achieving orgasm depends entirely on these techniques.

Such an interpretation completely ignores the intimate nature of the woman who is supposed to respond. For this reason psychiatrists have called attention to the emotional background of woman, to her unconscious motivations and the causes of her inhibitions. On the other hand psychiatrists may also be biased because they are prone to underestimate the importance of the physical side of sex.

One of the most frequent attitudes which inhibit orgasm is the traditional belief: “Woman must submit to the desires of her husband.” This means that during the sexual union she must remain passive; that she should not show any pronounced release of emotions.

We must also consider the woman. It is necessary to give her some help at first so that she is able to break through the psychological block against talking about sexual matters, even to a physician. Lack of response in many married women is often due to their refusal to permit physical contacts to excite them, and thus they acquire a certain pride in their frigidity. They do not see frigidity as what it is—an unhealthy condition.

Some women are frigid, because their husbands are puritan fellows “holier than thou,” with the result that they feel repressed and afraid of letting their impulses go, certain that they would be judged as improper. A system of morality which condemns any type of sex- ual conduct denies them the benefits of regular release.

Some of the wives who had been involved in a premarital relationship in which their response was repressed may be permanently affected, and may have difficulty later in responding to their husbands. The women who had been educated most strictly are less responsive in sexual relationships than those who are educated in a more liberal manner. Religious influences, for instance, are those which are particularly apt to bring about such failure.

Another cause which may disturb the psychological and physical response of sexual relationships is the shock of first intercourse by a hasty or inconsiderate husband.

There are also women in whom there has persisted a love fixation on their fathers. When such women marry a husband who calls them “mother,” their desires are totally frustrated. There are some other reasons: dyspareunia or painful coitus; fear of pregnancy; and malformation of the sex organs.

It has been reported by American authors that a large proportion of women do not e\ er achieve orgasm following marriage, or hardly ever achieve it. Perhaps this is because they are not prepared for it.

Premarital sex play, in my opinion, has a useful role here. It is the initiation of a virgin into a relationship with a young man. It is actually the first step in an important emotional adjustment. Indeed, the eventual sexual effectiveness of marriage will derive directly from these early experiences of sexual response.

The problem of sexual frigidity in women, which is so frequent today, cannot be resolved until we understand that we are confronted by a situation directly caused by our culture and its moralistic attitudes. It is not caused by any lack of capacity.

What can be done about this problem?

Attention must be paid to the parents who try to “educate” their (laughters by talking to them about “the dirtiness of sex.” Some of the adolescent girls who have been brought up in this way react in a most unfortunate manner when they are grown up. Their need to experience love is continuously frustrated by this barrier of rigid morals. These girls will grow up to form the legion of ascetic, obsessively neurotic spinsters.

Oriental writers emphasize that the neck of the womb is responsive to sexual stimuli. Kinsey claims that there are no sensations in that organ. Personally the author believes that there are, that the neck of the womb is very often erroneously ignored. To be specific: the penis which comes in contact with this organ, moves it back and forth, stretching the ligaments rhythmically. This movement produces sensations in the lower abdominal region, since these organs are covered by the peritoneum which is the most sensitive membrane of the whole body.

We must teach the man that the effectiveness of a sexual relationship depends on rhythmic stimulation which is uninterrupted, continuous and harmonious. Hie most important word here is “uninterrupted.” If the stimulation of the women is discontinuous, with intervals of waiting and changing of posture, the woman will return to a state of lowered excitement. It is the lack of familiarity with this detail that explains the frequently late response of the woman. It is significant that while the mastur-batory orgasm can be achieved in less than 2 minutes by many women, the coital one requires so much more time.

This is believed especially by those women who are in their forties. Instead of cooperating enthusiastically, they remain stolidly immobile. They cannot be blamed for this behavior. The guilt belongs to us, to society and to the physicians, since only 30 years age it was quite “taboo” to even discuss “these things.” This attitude of patient, quiet resignation is quite different from the type of cooperation that is necessary to make the sexual relationship an activity of give and take.

At present in our society there are a large number of persons with a limited understanding of the significance of sexual experiences for a young and healthy person. They disapprove of sex in principle. These persons, when they try to direct the behavior of others, may cause considerable damage. They often do direct it because this specific type of person tends to become a teacher, professor or director of an institution for girls.

Not a few of these are responsible for the sexual education in important lay and religious schools. We must not permit the responsibility for this education to be in the hands of persons who do not recognize the important role that sex plays in life.