Closed in the 90’s. After WW2 the German wind tunnels from Peenemünde were installed here. 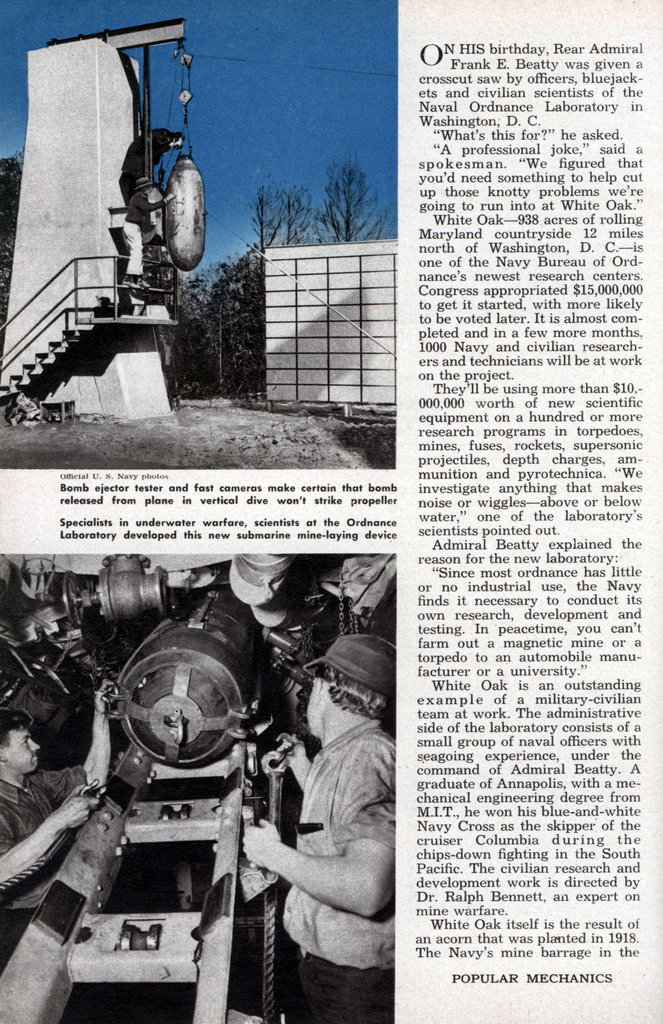 ON HIS birthday, Rear Admiral Frank E. Beatty was given a crosscut saw by officers, bluejackets and civilian scientists of the Naval Ordnance Laboratory in Washington, D. C.

“What’s this for?” he asked. “A professional joke,” said a spokesman. “We figured that you’d need something to help cut up those knotty problems we’re going to run into at White Oak.” White Oak—938 acres of rolling Maryland countryside 12 miles north of Washington, D. C.—is one of the Navy Bureau of Ordnance’s newest research centers. Congress appropriated $15,000,000 to get it started, with more likely to be voted later. It is almost completed and in a few more months. 1000 Navy and civilian researchers and technicians will be at work on the project.

They’ll be using more than $10,-000,000 worth of new scientific equipment on a hundred or more research programs in torpedoes, mines, fuses, rockets, supersonic projectiles, depth charges, ammunition and pyrotechnica. “We investigate anything that makes noise or wiggles—above or below water,” one of the laboratory’s scientists pointed out.

Admiral Beatty explained the reason for the new laboratory: “Since most ordnance has little or no industrial use, the Navy finds it necessary to conduct its own research, development and testing. In peacetime, you can’t farm out a magnetic mine or a torpedo to an automobile manufacturer or a university.”

White Oak is an outstanding example of a military-civilian team at work. The administrative side of the laboratory consists of a small group of naval officers with seagoing experience, under the command of Admiral Beatty. A graduate of Annapolis, with a mechanical engineering degree from M.I.T., he won his blue-and-white Navy Cross as the skipper of the cruiser Columbia during the chips-down fighting in the South Pacific. The civilian research and development work is directed by Dr. Ralph Bennett, an expert on mine warfare.

White Oak itself is the result of an acorn that was planted in 1918. The Navy’s mine barrage in the North Sea helped to defeat the Kaiser’s U-boat threat. Subsequently, it was decided to continue research on mines and a laboratory was set up in the Naval Gun Factory in Washington, D. C. There it remained until the end of World War II. Now it is taking root at White Oak.

As planned, White Oak is a “dream’ laboratory — designed after consultation with scores of U. S. scientists. It consists of approximately 50 permanent buildings all fitted with prefabricated, movable partitions so that laboratories and offices of any size may be created. They are fireproof, air-conditioned, provided with fluorescent lighting and connected by pedestrian tunnels. Laboratory areas are supplied with voltages of different values, compressed air, gas, steam, hot and cold water. A model shop is equipped to do all but the heaviest kind of machine work.

First group of buildings to be completed at White Oak (in which scientists are already at work) is the Magnetics Group.

The seven buildings in this group are as free from magnetism as science can make them. They were built in an area isolated from minor disturbing influences such as other buildings and vehicles. Iron and steel have been entirely eliminated. Nails are copper, light switches are porcelain, drains are transite, building beams are wood. Even the sand that went into the bricks was screened to make certain it did not contain minute particles of iron oxide.

“This kind of planning,” according to Bennett, “has resulted in what is probably the earth’s largest ‘nonmagnetic’ pole.”

The buildings are equipped with coils of varying size, through which electric current can be sent from a master control panel. The purpose is to duplicate terrestrial magnetic fields under any sort of a ship, at any speed, in any part of the world.

The magnetism research program at White Oak will not only be aimed at developing new and more powerful kinds of mines—but also toward such new equipment as the compensated airborne magnetometer. This is an uncannily sensitive device which has been described as “starting where radar leaves off.” It was originally designed to point a finger at submerged submarines. It can also be used to locate oil and mineral deposits, and the contour of the earth underneath the polar ice cap.

One of the most interesting —and perhaps significant— group of buildings at White Oak is the Wind Tunnel and Ballistics Group.

Three of the seven planned wind tunnels are from the famous Nazi supersonic research center at Peenemunde on the Baltic, where the famous V-2 was developed. After the bombing of Peenemunde, this tunnel was moved to Kochel. Bavaria, where it was captured by the U. S. Army. The equipment was loaded aboard 38 railroad cars and shipped to White Oak. Redesigned and modernized, it will provide the Navy with a wind tunnel whose range of Mach numbers and number of nozzles are greater than any in existence.

The wind tunnel is operated from a huge steel sphere—52 feet in diameter — and two huge pipes that run out from it to two separate wind tunnels which can be worked in alternation. This is how it works: a vacuum is created in the sphere; quick-acting valves are opened and the air rushes in through the pipes. This takes but 40 seconds, after which the air is pumped out of the sphere —the whole cycle taking about 10 minutes.

In these streams of air that flow at dizzying speeds are placed small models of rockets and other missiles (average size— 2 inches in diameter). As the air rushes past, they are observed or photographed with elaborate optical apparatus. Two pressurized ranges will check, in free flight, models previously tested in wind tunnels.

In the future, the Acoustics Division plans to build apparatus whereby sound waves can be projected into the air to obtain upper-atmosphere temperatures and pressures. At present, such information is recorded by balloons and V-rockets fired into the stratosphere.

The laboratory will have one of the most complete X-ray experimental stations in the world, featuring a 10,000,000-volt betatron. This huge machine will produce powerful X-rays that will penetrate up to 20 inches of steel, exposing radiographic film in less than a minute.

The betatron is useful not only for detecting flaws in steel and other materials.

but also for looking inside weapons without disassembling them.

One of the more spectacular testing devices at the laboratory is a 75-foot steel drop-tower that can handle bombs and projectiles up to 1000 pounds. Its main purpose is to test live fuses. The fuses are mounted in dud bombs, hoisted by an electric motor to a height of 40 feet, and dropped on sand or armor plate.

The idea of the drop-tower grew out of experiences in World War II. Occasionally bombs were accidentally dropped in the course of handling — endangering ships and crew. Experiments at White Oak are designed to provide the knowledge of how to handle such “runaway” bombs and to test the workability of fuses after a fall.

Another bomb-testing device that has been tried is the bomb ejector tester, which simulates a plane diving at a 90-degree angle. The problem is to make certain that the bomb will clear the plane’s propellers in a vertical dive. Inert bombs are hoisted up a 15-foot tower, fired from an ejector and their path measured by fast cameras.

Equally important as drop tests are the shock and vibration trials. Four pieces of equipment, based on the “air gun” principle, are used in shock testing. A projectile fired from a 16-inch gun or a heavy bomb striking the water must be built rugged enough to withstand such a shock without being damaged or exploding upon contact. The equipment at White Oak tests acceleration and deceleration ranging from 4 to 35,000 times that of gravity.

And what about those billions of smaller shocks called vibrations? What happens to ammunition, mines and bombs that are transported by jiggling railroads, trucks, planes or ships? The White Oak facilities include a vibration machine that, as one scientist puts it, “shakes the very devil out of everything that goes into it.”

Another question that the Navy is cur- rently asking is: what happens to live-loaded rounds of ammunition when continuously drenched with salt water? Projectiles to be tested are placed in a spray cabinet and receive a three or four-week drench treatment. Other boxes and cubicles—which look like huge butchers’ iceboxes—are temperature rooms that can be regulated between the span of 200 degrees above to 60 degrees below, Fahrenheit.

To study the peculiarities of sound waves, White Oak scientists are preparing one of the world’s largest anechoic or “dead” rooms. This is a room which reflects almost no echo from its walls. Sound waves are trapped by five-foot wedges of fiber glass which line the walls, floor and ceiling—making the room 99.9 echoproof.

The anechoic room will be three stories high, with a control room located on the second floor. Loudspeakers, microphones, sirens and acoustic air fuses will be tested here. The latter is a new type of weapon which holds great possibilities. The Nazis began experiments with it during the war. German fighter planes would fly above an American air formation and drop “air mines” equipped with acoustically sensitive fuses. The mines exploded when they fell within sound range of the American-made motors.

Also to be investigated in the anechoic room are human hearing problems. How loud can the reproduced spoken word become before it is unintelligible? An authoritative answer to this will be useful in designing loudspeakers and earphones.

The laboratory will also manufacture plastic devices in experimental lots and grow its own experimental lithium-sulphate crystals, used in weapons and such intricate devices as sonar, underwater sound detection and transmission systems. Because few crystals are known which possess the necessary piezo-electric qualities, the Navy hopes to discover new ways of producing and using them.

Although White Oak is one of the “brains” of the Bureau of Ordnance, its eyes, ears and hands operate all over the U. S. Torpedoes are tested at Hiwassee Dam, N. C., and at Morris Dam, Calif. Mines and depth charges are tested at Fort Monroe, Va., and exploded near Solomons, Md. Fuses, pyrotechnica and parachute gear are tried out at the Naval Proving Ground, Dahlgren, Va. Rockets and jet motors are flown at Inyokern, Calif. New types of guns are developed at the Naval Gun Factory, Washington, D. C.

In addition, little groups travel literally to the ends of the earth to test Navy weapons under all conditions. One group may be at the atom-bomb testing grounds in the South Pacific. Another group may be testing the magnetometer in the Antarctic. The third may be investigating seismic waves in an Alaskan volcano.

“In the next war—which we hope will never come—there can be no delaying action,” pointed out Admiral Beatty. “We hope to have completed a large backlog of pure and applied research which can be translated immediately into weapons. There won’t be any time for research in a world of atomic weapons, proximity fuses and supersonic guided missiles.”

Navy and civilian scientists at the Naval Ordnance Laboratory, White Oak, Md., are fighting the “cold war” right now with blueprints instead of bullets.