Mechanix Illustrated
Issue: Sep, 1947
Posted in: How to, Photography
1 Comment on Shoot it in COLOR… indoors (Sep, 1947) 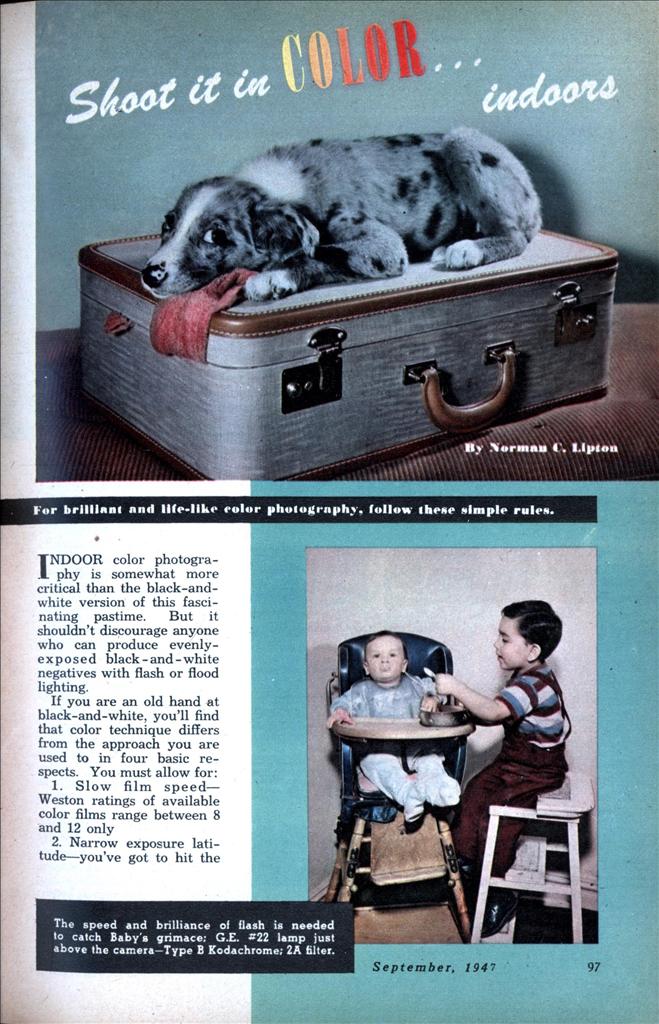 Shoot it in COLOR… indoors

INDOOR color photography is somewhat more critical than the black-and-white version of this fascinating pastime. But it shouldn’t discourage anyone who can produce evenly-exposed black-and-white negatives with flash or flood lighting.

If you are an old hand at black-and-white, you’ll find that color technique differs from the approach you are used to in four basic respects. You must allow for:

1. Slow film speed— Weston ratings of available color films range between 8 and 12 only.
2. Narrow exposure latitude—you’ve got to hit the exposure on the head within 3/4 to a full lens stop.
3. High contrast—lighting must be relatively flat and even to retain the original color hues.
4. Color balance—the particular color film you use is balanced in manufacture for a particular type of light source— daylight, photofloods or 3,200 K. studio lamps. You must use the type of lighting for which your film is balanced—or vice versa—or adjust the color balance by placing a special filter in front of the camera lens. (See table, above.)

There are five “tungsten” type color films on the market today, suitable for use with the general run of indoor photographic lighting. You will find them listed, for convenience sake, in the table above— along with their respective sizes, film speeds and color balance characteristics. Some may be processed by the user in home darkrooms, as indicated, while others must be returned to the film manufacturer for processing.

When shooting color films, it is obvious that you must avoid mixing light sources— 3,200 K lamps and floods; floods and flash lamps, etc.—unless you are trying to obtain special local color effects that you have worked out by past experience. If the color temperature of the light source is too low for the particular color film, the resulting color picture will have a yellowish hue; if the color temperature is too high, the result will have a bluish cast.

The arrangement of lights, subject, background, etc., for color photography is easier, in some respects, than preparations for a black-and-white shot of the same type of subject. Black-and-white photography has to depend on grey tone contrasts and strategically placed shadows to distinguish different objects in the scene, whereas natural color contrasts—normally illuminated—do the job in color. In fact, deep shadows usually detract from the eye appeal of color photographs unless spotlighting effects are called for.

“Composition” in color photography, like the black-and-white approach, consists of accenting the principal subject and important elements of the scene and de-emphasizing backgrounds and areas of secondary interest. This is done by placing the principal subject in the center or some other commanding position in the picture area, and also by moving the camera as close to the subject as the desired perspective permits.

In composing a color subject, you should, insofar as possible, use colors that readily attract the eye in the areas of principal interest, and colors that have less attraction for the human eye in secondary and background areas. By and large, bright saturated colors attract the eye more readily than pale hues and darker shades; and with colors of equal brilliance, colors of longer wave length and warmer hue (reds, orange, yellow, etc.—in decreasing order) attract the eye more readily than cooler hues of shorter wave length (violet, blue, blue-green, etc.—in increasing order of warmth). If you are stuck with a brilliant or warm-colored background, you can reduce its “priority of visibility” by underexposing it in relation to the principal subject. Either reduce or cut out the background illumination, or else, move the subject so far in front of the background that the normal front lighting will not light it adequately.

Because of the relatively high, inherent contrast of color films, light falling on highlight areas should not exceed the intensity of light falling on shadow areas by more than 3:1 if the original colors are to be reproduced accurately from corner to corner of the picture area. A ratio of 2:1 produces even greater color fidelity. This calls for a flat or carefully balanced lighting arrangement.

Flat lighting can be achieved by means of a single lamp just behind and slightly above the camera—beamed down at the subject at a gently-sloping level . . . or, a single lamp or two directed at a low white ceiling just in front of the principal subject … or, a pair of lamps aimed squarely at the subject from the camera position with the edges of their beams overlapping.

You can achieve a satisfactory balanced-lighting effect by beaming a single lamp down at the subject from an elevation and angle of about 45 degrees—with a large piece of white cardboard or a bed-sheet or white tablecloth just outside of the picture area on the shadow side of the subject to reflect light back into the shadows. The reflecting surface must be large and close enough to keep the light-intensity ratio 3:1 or lower. Another, and generally more practical way of balancing the shadow illumination makes use of a second lamp placed close to the camera lens and aimed squarely at the subject. If the intensity of the main (45-degree) light is no more than twice as great as that of the fill-in, the over-all lighting contrast will not exceed the 3:1 limit.

If the subject is more than 1-1/2 feet in front of the background, it will be necessary to light the background with a lamp or pair of lamps (aimed at it from opposite sides at equal angles). Otherwise, the background color will be reproduced in a darker-than-normal shade. If a single lamp is used, it may either be hidden behind the principal subject or aimed at the background from outside of the picture area.

Another supplementary light source—an “effect” lamp—is frequently called for with flat as well as balanced color lighting setups. The effect lamp adds sparkle to hair or small areas of other reflecting surfaces. It is placed either behind or high above the subject and carefully aimed at the area to be “heated up” by local overexposure.

The foregoing lighting arrangements may be used as described with all the artificial light sources employed for color photography—photofloods of all types (including Reflector Floods and Reflector Spots); 3,200 K. lamps in reflectors or studio fixtures, and flash lamps. Just remember that you must not mix the three different lamp types. (All photofloods burn at approximately the same average color temperature—3,400 K.) Work out your exposures carefully before you start shooting. Flash guide number tables and flood lamp exposure tables supplied by lamp and color film manufacturers are an excellent guide. It’s a good idea to make a few test exposures on the first roll or package of color film you shoot indoors to standardize your equipment against the tables. Shoot one shot at the recommended time and lens opening and one each with the lens half a stop wider and half a stop smaller. A dependable photoelectric exposure meter is even more reliable, when you’re working with continuous-burning lamps of the flood or studio type. With meters that indicate reflected light values, it’s best to take readings of the lightest and darkest color elements in the scene, exclusive of black-and-white, and to expose at a setting mid-way between the two extremes. If the contrast does not exceed 4:1, both highlight and shadow colors will be retained to an appreciable extent by this method.

HINTS: Color films are slow, and you use wide lens openings: so be sure to focus accurately on the subject of principal interest in the scene. . . . Don’t try to stop children or babies with a slow instantaneous shutter speed or a time exposure. Flash is much better. Ordinary, metal-filled flash lamps burn completely in about 1/50 sec.; SM and SF primer lamps flash in 1/100 to 1/200 sec., permitting you to stop fairly violent action with an open-flash-shut exposure. . . . Photoflood lamps blacken with use—lowering both color temperature and brightness. Better discard these lamps (for color) after their normal burning time and then use them for black-and-white only. Use No. 1 floods for color for only 1 hour; No. 2’s for 2 hours, and No. 4’s for 3-1/2 hours. .. . If you do shoot color film by synchro-flash, be sure the flash-gun is accurately “synched.” If the camera shutter opening does not coincide with the peak (maximum light output) of the flash lamp, the color of any light caught will be much warmer (redder) than the average color temperature rating of the lamp, adding a yellow-red hue to your result. •