This reminds me of the Caterpillar drive from The Hunt For Red October. 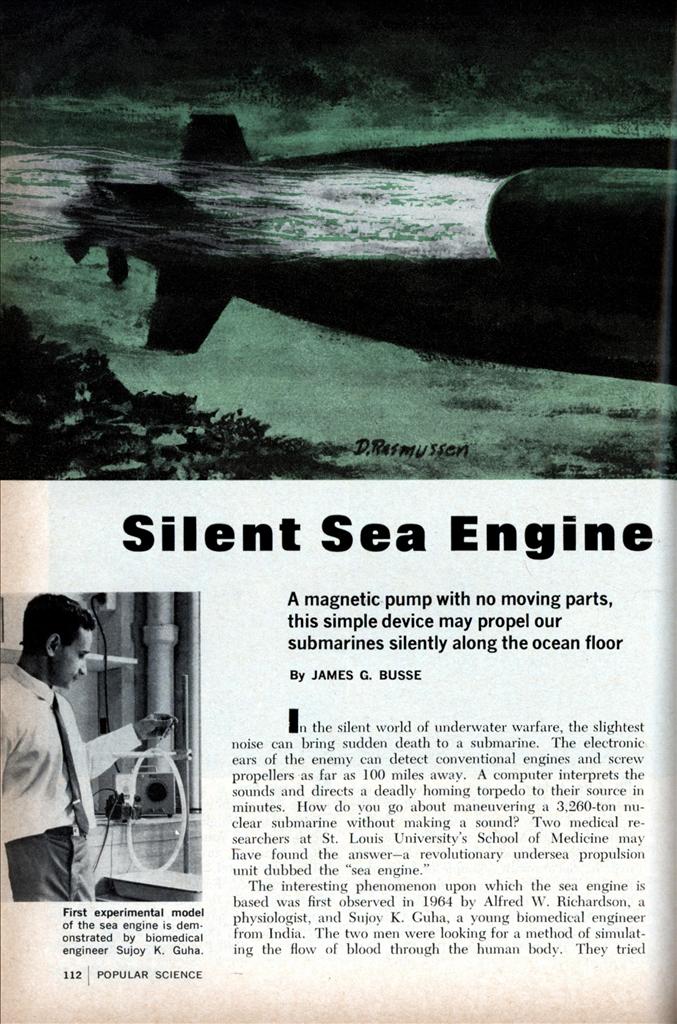 A magnetic pump with no moving parts, this simple device may propel our submarines silently along the ocean floor

In the silent world of underwater warfare, the slightest noise can bring sudden death to a submarine. The electronic ears of the enemy can detect conventional engines and screw propellers as far as 100 miles away. A computer interprets the sounds and directs a deadly homing torpedo to their source in minutes. How do you go about maneuvering a 3,260-ton nuclear submarine without making a sound? Two medical researchers at St. Louis University’s School of Medicine may have found the answer—a revolutionary undersea propulsion unit dubbed the “sea engine.”

The interesting phenomenon upon which the sea engine is based was first observed in 1964 by Alfred W. Richardson, a physiologist, and Sujoy K. Gulia, a young biomedical engineer from India. The two men were looking for a method of simulating the How of blood through the human body. They tried various types of mechanical pumps without success. The pumping action was too irregular.

While investigating the effects of magnetic fields on weak salt solutions similar to blood, the two researchers stumbled across an interesting fact: They could make the electrically charged atoms in such solutions move in one direction by applying a magnetic field in just the right way. Then they made a second important discovery: The moving atoms dragged water molecules along with them so that the entire solution moved.

Richardson and Guha suddenly realized that they had the makings of a new type of pump. They quickly assembled an experimental model and found, as they had expected, that the device really worked. Their “pump” consisted of nothing more than an unimpressive collection of junk-box electronic components. Yet the instant they connected it to a source of electrical power, a weak salt solution inside it began to move. A number of tests were made and new models were constructed, some of which permitted very accurate control over the quantity of liquid being pumped, and others which made the liquid move in a series of pulses, duplicating the pumping action of the human heart. Amazingly, the pumps could move a variety of liquids—including ordinary tap water—without difficulty. Then a visiting scientist from the Office of Naval Research suggested they try pumping sea water. The pump worked better than ever.

The sea engine is a form of electromagnetic pump, which is nothing new. Units working on the same principle have been used to pump liquid metals such as sodium through nuclear reactors for coolant purposes. However, a pump had never before been constructed to move seawater—electronically, with no moving parts, with no sound. And that’s what intrigues naval engineers.

The Navy problem. Nuclear-submarine skippers have had to develop a variety of ways of escaping detection. At times, they dive to fantastic depths where sub noises may be confused with other ocean sounds. Or they may sit quietly on the bottom and wait for the enemy to come to them. In any case, starting the engine may mean immediate destruction.

An electromagnetic pump large enough to propel a submarine would require a lot of electrical power, but this would present no problem on a nuclear submarine. Naval engineers made a study of an advanced pump constructed by Richardson and Guha, and found that conversion from pump to sea engine necessitated only minor changes.

A submarine would be equipped with two sea engines: one to port and one to starboard. Each engine would operate independently, the direction and force of its propulsive jet of seawater changed by the mere flick of a switch. In this way, the sub could move forward, backward, or turn by pumping water in one direction on one side and in the other direction on the other side.

Most likely, sea engines would be installed along with conventional high-speed screw engines for normal use. The sea en- gines would enable the sub to engage in silent warfare by gliding along the ocean bottom and maneuvering close to its prey.

How it works. The simplest form of sea engine consists of two metal-plate electrodes mounted parallel to each other inside a rectangular chamber called a “cannula.” An opening at each end of the cannula permits seawater to flow between the electrodes. The cannula is mounted between the poles of a powerful electromagnet, so that the magnetic field is concentrated on the water between them.

When alternating current is applied to the two electrodes, large numbers of ions-sodium and chlorine ions in seawater—are immediately attracted to the water between them. These ions attempt to move back and forth between the electrodes. Their individual magnetic fields (each ion is surrounded by its own tiny electromagnetic field) are repelled, however, by the powerful external magnetic field. Many of the ions are thus forced to move sideways, away from the electrodes. As they move along, they drag water molecules with them, causing the water to move out of the cannula. More seawater enters from the other opening, producing a continuous flow.

Torpedoes and destroyers. There is every reason to believe that a sea engine will power a radically new type of torpedo. The ones we’re using now produce a relatively loud sound, giving an alert enemy a chance to duck. A somewhat slower fish, powered by a silent sea engine using high-capacity batteries, would change this.

Highly specialized types of surface ships, such as the hunter-killer destroyers, could also profit from periods of silent running with sea engines.

How about the pumping of blood—the application of the electromagnetic pump that Richardson and Guha first set out to explore? Experiments are currently under way to use a modified sea engine to temporarily replace the human heart during surgical operations. Another model may one day be used to pump waste from a patient’s body during long operations.

Fifteen years ago, a government report said: “Undersea warfare is … a deadly game of blindman’s buff, in which the winning side is likely to be that with the most acute hearing.” A footnote might add, “and the quietest engines.”

How to Build Your Own Sea Engine

Switch on the power and watch a stream of salt water mysteriously begin to flow around and around a closed loop of plastic tubing. How? Build your own sea engine—a fascinating gadget for the amateur scientist or a top-flight science-fair project. It costs just a few dollars. There are many things about it that still puzzle scientists; perhaps you can make an improvement.

Make an electromagnet from an isolation transformer with a 100-watt rating. Cut through the transformer laminations in two places with a hacksaw (see drawing below) and remove these pieces. Next, cut a 5/8″ gap (no larger) in the remaining laminations. Connect primary and secondary windings in series (A to B in the schematic at far right below). Connect C and D to the AC line. Quickly test the gap for a magnetic field with a screwdriver tip. Try connecting A and C together and B and D to the AC line, and again test the gap. One hookup will give a much stronger field than the other: That’s the one to use.

Make a cannula out of a length of hollow plastic towel bar, sheet plastic, or similar material. It must fit into the magnet gap. Two copper or stainless-steel electrode plates are mounted inside the cannula. Copper is best, but is attacked by salt water and eventually it has to be replaced.

Carefully solder wire leads to the electrodes. They leave the cannula through snug holes sealed with a good cement (one containing methyl ethyl ketone). Use the same cement to attach ends to the cannula. The ends have holes fitted with short lengths of glass tubing. Two tiny holes drilled through the top of the cannula will allow captured air to escape, permitting it to fill with water. The holes can later be sealed to prevent leakage. Run a length of plastic tubing in a closed loop from one end of the cannula to the other. A “T” connection in the loop will aid in filling. You can get the tubing—called “disposable plastic catheter” —from a medical-supply house.

The assembly. Use stove bolts to hold the transformer laminations together. Mount it on a base, with some type of supports to keep the tubing at the level of the cannula. Switch SI is optional. Do not use a lower-wattage resistor for R1. It can be found at most surplus or large electronic-parts dealers. Since it will give off some heat, mount it and R2 (optional) on asbestos.

Fill a glass with tap water and let it stand for a day to eliminate air. Add half a teaspoon of table salt and slowly stir until dissolved. Carefully fill cannula and tubing with the salt water. Work out all air bubbles.

Check all electrical connections before ap- plying power to the model. Inspect the cannula for leaks, particularly where the lead wires and glass tubes pass through the walls. If everything is okay, plug it into an outlet and throw the switch. Watch tiny dust particles and other impurities in the water to detect flow. If there is no visible movement, try adding a tiny drop of ink to the water in the tubing as an indicator.

Try various resistances for R2. Eliminate it entirely and note the result. Vary the resistance of R1 by means of its slide contact and see what happens. With a little experimentation, you’ll quickly find the best settings for maximum pumping action. Watch the effect of increased conductivity (adding more salt) on flow rate.