Popular Science
Issue: May, 1945
Posted in: DIY, How to
Tags: art, crafts, hobbies, printing
2 Comments on Silk-Screen Stenciling… A Profitable Hobby (May, 1945)

Silk-Screen Stenciling… A Profitable Hobby (May, 1945) 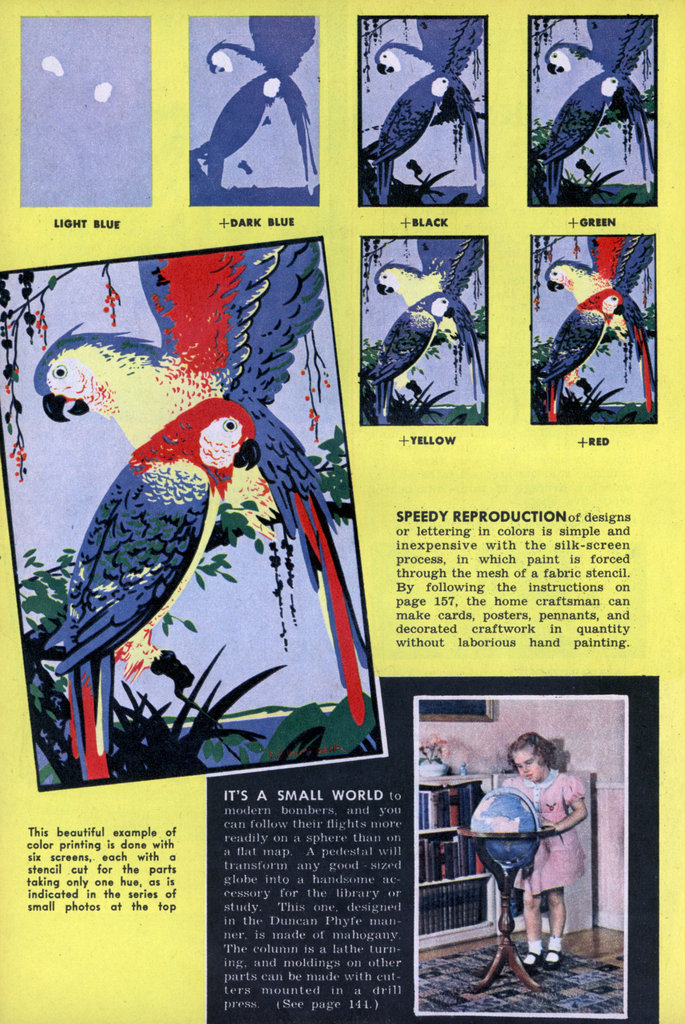 HOW POSTERS, GREETING CARDS, DECORATED MATS, AND ART WORK CAN BE REPRODUCED IN QUANTITY WITH SIMPLE HOMEMADE EQUIPMENT

YOU can hardly go through an ordinary day without coming across many articles printed by silk screen. Tablecloths, glasses, trays, book jackets, posters—these are but a few examples of the variety of decorative materials made possible with the silk-screen process.

At little expense and in your own home, you can individualize your stationery, make personal greeting cards, decorate shelving, drapes, table linen, and handkerchiefs for yourself and your friends, and print game boards, emblems, colorful pennants, and magazine covers for your civilian defense organization, for your club, or for your school. You may begin silk-screen printing as a hobby and wind up with a profitable, interesting commercial venture. But no matter how or why you engage in this form of art, you will find it a lot of fun.

Silk screening is a simple printing process that works on the principle of the stencil. The design to be printed is attached to a porous screen of silk or organdy stretched across a wooden frame. When the article that is to be decorated is placed on the printing base, the screen lowered over it, and the paint pushed across the screen with a squeegee, paint will then go through the mesh of the organdy wherever the fabric is “open” and leave an imprint. It will not go through where the stencil “closes” or blocks out the organdy. For a design in more than one color, a separate stencil is required for each color.

The equipment is simple. You need a screen consisting of a rectangular wooden frame with organdy stretched across it, a smooth printing base or board upon which to set the card or other article on which the design is to be printed, and a rubber squeegee for pushing the paint through the screen. Papers, paints, solvents, and other supplies can be found at most art-supply stores.

A sturdy drawing board, a smooth table, or any flat surface will serve as a printing base. If there is an old window wiper handy, you need not buy a regulation squeegee, for it will work just as well. The purpose of the squeegee is to force an even coat of paint through the screen so that an equal amount of it will reach all parts of the design being printed. A customary method of quantity printing with a silk screen is to pour a sufficient amount of paint on the screen, push it across with the squeegee to print one card, push it back to print the next, and thus alternate each time, renewing the supply of paint when necessary.

Make the wooden frame with strong, square corners, using any corner joint that you prefer and bracing it with angle irons if necessary. As long as it is rectangular, it can be of almost any dimensions, but 14″ by 20″ will be found a good size. If you wish, you can make more than one frame and have an assortment of sizes.

Stretch a piece of organdy across the frame to serve as a screen or ground for holding the stencil in a fixed position, tacking it tightly to the frame all around. This completed unit is known technically as the screen. The use of organdy, incidentally, was not developed as a wartime substitute and should not be considered a makeshift arrangement. When silk-screen printing was young, only silk was used, and this gave the process its name, but later on, while silk was still plentiful, other fabrics, among them organdy, also came into use and proved equally popular.

Hinge the completed screen to a printing base so that it may be raised and lowered into the same place for each screening. Hinges having removable pins will permit detaching the screen from the base when necessary, and also will allow substitution of another screen when desired. A 6″ strip of wood held to the side of the frame with a single nail as a pivot will be helpful in propping up the screen so that your hands will be left free for removing prints from the base and for inserting fresh cards.

This silk-screen outfit is permanent equipment that will not have to be replaced for each new project. The same unit, properly cleaned, can be used for dozens of different jobs. With it you can print on any reasonably flat surface, and that includes such diverse materials as paper, leather, cardboard, wood, glass, linoleum, and textiles.

Before taking up the preparation of stencils, it is well to look into how silk-screen craftsmen handle the problem of register. In a one-color job this is not quite as important a problem as in work with two or more colors, for then care must be taken to print each color in alignment with every other color.

Here is a foolproof method of color registration. The card to be printed is centered on the printing base, like a picture in a frame, with the sides of the stencil frame as the limiting boundaries as shown in Fig. 1. Cardboard register guides are then tacked in position along the sides of this card. They fix the position of every succeeding card inserted for the printing of that particular design and are not altered or reset until all the colors have been printed on all the cards for this job.

There are five main ways of making stencils, but one—the photographic method —is fairly complicated for the beginner and will be omitted here.

Most elementary is the paper stencil, which may be prepared from a sheet of tracing paper or ordinary bond paper. Lay this paper over the picture or decoration to be reproduced while the latter is centered on the printing board between the registry guides and fasten it with adhesive tape; then trace the lines desired with a sharp knife, preferably a stencil knife, as in Fig. 2. Remove the tape carefully so as not to shift the tracing paper, and then lower the screen into place. The paint that is to be used in printing is put on the screen and spread over it with the squeegee. This adheres the stencil to the screen, after which it is a simple matter to raise the screen and peel off those parts of the stencil that are to be left open for printing the design, as shown in Fig. 3.

The card to be printed is then placed on the printing board after the original has been removed, and the printing is begun, paint being spread over the screen with the squeegee. Silk-screening paint, with either an oil or water vehicle, is obtainable at artists’ supply houses. When you have made as many cards as desired, or have finished them all with the first color of a multicolor print, scoop up the paint remaining on the screen and peel off the stencil. The screen can then be washed with kerosene-soaked rags, after which it will be ready for a new stencil.

If hundreds of copies are to be printed, a block-out stencil will prove better than paper. Glue, diluted with 3 parts water, is used to block out those parts of the screen that are not to be printed. Lacquer or shellac can be used instead of glue, however, and are necessary with water colors so that the paint will not dissolve the stencil.

Lay the screen over the model and trace the desired lines on the organdy with pencil or ink. Remove the original from the base, lower the screen, and then block out the parts that are not to be printed, applying the glue or other medium with a paint brush, as in Fig. 4. Allow plenty of time for drying— at least an hour for glue, less for shellac or lacquer—and proceed with the printing the same as when using a paper stencil.

When the screen is to’ be cleaned, if glue has been used, just sponge it with warm water to dissolve the glue, washing both sides of the organdy. Lacquer thinner or alcohol is required for the other mediums. Be sure to allow the screen to dry thoroughly before putting it away.

Lithographer’s tusche, used with glue, forms the basis for still another stencil. Unlike the other methods, the tusche, which is a greasy sub- stance either in liquid or crayon form, is applied to the screen within the outlines of the design to be reproduced, as in Fig. 5, instead of outside them. Any mistakes in design may be washed out with water while the tusche is still wet, or with kerosene after it has set. If the picture being copied is valuable, a tracing of it may be used as a model to keep tusche from seeping through the screen onto it.

Prop up the screen after applying the tusche, or remove it from the hinges and place it on blocks, and then spread glue over it with a piece of cardboard. If not free-flowing, the glue may be thinned with water. When the glue has dried, that over the tusche foundation will be scaly and can be easily broken away and removed, along with the tusche, with a kerosene-soaked rag, leaving the necessary open sections in the stencil for printing.

Tusche may be made to give a variety of textural effects. In the liquid form it may be applied with an atomizer, air brush, toothbrush, or comb, or it may be stippled, spattered, or cross-hatched. The soft, sketchy lines of the crayon may be accented with the liquid tusche to bring out high lights or to add depth.

Finally, there is a special film-stencil paper that is often preferred when printing is to be done in the thousands. This special paper, which can be obtained from art-supply dealers, is a glassine sheet lacquered on one side. The film is laid, lacquer side up, over the picture to be reproduced and is fastened at the corners with adhesive tape. Then the design is cut with a stencil knife, but just through the lacquer, not through the glassine paper, and the cutout parts are stripped off, as shown in Fig. 6. Examine the open areas and brush off any stray particles of lacquer that remain.

Now lower the screen and apply a little lacquer thinner with a soft, folded cloth to a small area at a time. Rub it with a dry, clean cloth, working more briskly as the thinner dries. This adheres the lacquer to the screen so that the glassine paper can be pulled away. Open places are thus left in the lacquer stencil through which the paint will print.

A stencil of this kind is practically imperishable and can be stored with the screen indefinitely if you wish to preserve it for further use, or it can be dissolved away.