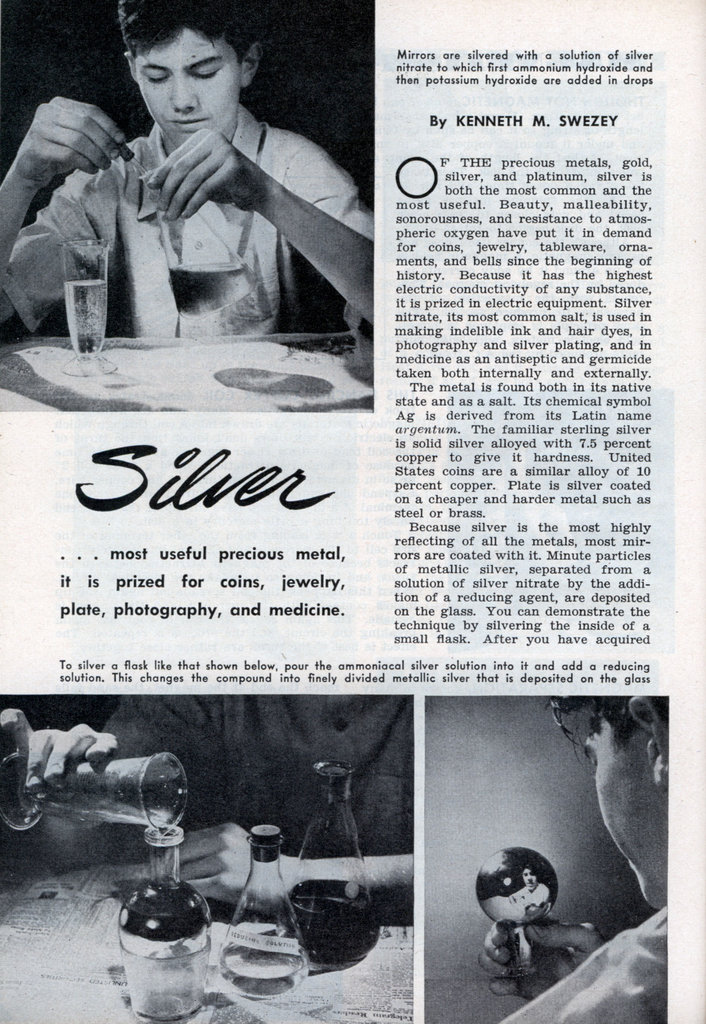 . . . most useful precious metal, it is prized for coins, jewelry, plate, photography, and medicine.

OF THE precious metals, gold, silver, and platinum, silver is both the most common and the most useful. Beauty, malleability, sonorousness, and resistance to atmospheric oxygen have put it in demand for coins, jewelry, tableware, ornaments, and bells since the beginning of history. Because it has the highest electric conductivity of any substance, it is prized in electric equipment. Silver nitrate, its most common salt, is used in making indelible ink and hair dyes, in photography and silver plating, and in medicine as an antiseptic and germicide taken both internally and externally.

The metal is found both in its native state and as a salt. Its chemical symbol Ag is derived from its Latin name argentum. The familiar sterling silver is solid silver alloyed with 7.5 percent copper to give it hardness. United States coins are a similar alloy of 10 percent copper. Plate is silver coated on a cheaper and harder metal such as steel or brass.

Because silver is the most highly reflecting of all the metals, most mirrors are coated with it. Minute particles of metallic silver, separated from a solution of silver nitrate by the addition of a reducing agent, are deposited on the glass. You can demonstrate the technique by silvering the inside of a small flask. After you have acquired experience, you can silver telescope mirrors arid ornamental glass objects. Use a porcelain, enameled, or paraffin-coated tray as a container.

The reducing solution must “age,” so it should be made several days or even weeks in advance. Make it by dissolving 22 grams cane sugar in 250 ml. water in which has been mixed 45 ml. ethyl alcohol and 1 ml. concentrated nitric acid.

Do not make up the silvering solution until just before using for, although it is safe while fresh, it becomes concentrated when it stands and forms silver fulminates â€”sensitive chemicals that may explode at the slightest touch. Immediately after use discard the remaining solution by washing it down the drain with plenty of water.

This silvering solution is mixed in a large beaker or in an Erlenmeyer flask. For a first-rate silvering job, use only distilled water. Dissolve 5 grams silver nitrate in 75 ml. water, and add slowly with constant stirring some concentrated ammonium hydroxide. A dark-brown precipitate of silver oxide will form first, but it will dissolve as more ammonium hydroxide is added. When the solution begins to clear, put the ammonium hydroxide in drop by drop until it is completely clear.

Now add very slowly and with constant stirring a solution made up of 2 grams potassium hydroxide in 80 ml. water. Silver oxide will again be precipitated, and it again will begin to clear with the addition of more hydroxde. Stop adding the potassium hydroxide, however, while the solution is still a light brown, disregarding any suspended matter that may be present.

Clean the flask to be silvered with alcohol or ether and follow with a swabbing of nitric acid applied with cotton on the end of a glass rod. Rinse the nitric acid off with distilled water. Then immediately half fill the flask with the silvering solution and add the reducing solution until it is full, swirling the flask to mix the two. The temperature of both solutions should be about 18 deg. C. (64 deg. F.). Keep swirling the flask gently, and in a few seconds bright silver will appear on the inside surface. This coating should be sufficiently thick in about five minutes, after which the flask should be emptied down the drain and rinsed out to prevent forming of a fulminate. A coat of varnish or shellac will keep the silvered surface from tarnishing.

Although silver does not react directly with oxygen, it tarnishes by reacting with sulphur such as is contained in rubber bands (vulcanized with sulphur), eggs, and mayonnaise. Traces of hydrogen sulphide in the air also cause the black coating that requires frequent polishing.

To show the nature of tarnish, you can produce it quickly by exposing a silver object to hydrogen sulphide gas. Cover a few grains of iron sulphide in a small vial with dilute hydrochloric acid, place the vial in a tumbler, and put beside it a silver spoon that has been moistened with water. Cap the tumbler loosely and stand it outdoors or in a well-ventilated room, for the gas has a foul odor and is poisonous.

Most people remove the tarnish from silver by rubbing with a soft abrasive such as infusorial earth or precipitated chalk. An electrolytic method requiring no manual effort is also known to housewives. The silverware is placed in a clean aluminum pan, with each piece touching the aluminum, and . is covered with water containing several teaspoonfuls of washing soda (sodium carbonate). To hasten the reaction, the water is heated almost to boiling. The silver, touching the aluminum and surrounded by sodium carbonate solution, forms one plate of an electric cell which first turns the silver sulphide tarnish into metallic silver and then deposits this on the pan. Steel wool easily removes discoloration from the pan. This electrolytic method does not wear the silver away any quicker than abrasive rubbing. It should not be used on silverware having a “French finish,” that, is, a finish in which the depressions are toned with gray, since it may clean out the depressions as well as the surface.

Silver nitrate (AgNO3) is formed by dissolving silver in dilute nitric acid. In its pure form it is a white crystalline substance that readily dissolves in water. It is a strong oxidizing agent and will burn the skin, leaving a black stain of finely divided metallic silver. Silver nitrate stains on cloth may be removed by treatment with a 20-percent solution of copper chloride, then with a 10-percent solution of sodium thiosulphate (photographers’ hypo), and a final rinse in plain water.

Add a solution of a soluble bromide, chloride, or iodide to a solution of silver nitrate, and you will get a light-sensitive salt of the kind that makes possible the whole magic of modern photography. Mix the salt with gelatin, spread the suspension thus made on a photographic plate or film, place this in a camera, expose it to the light through the lens, and the salt mysteriously changes. Examined under a safe light, the plate shows nothing unusual: but put it in a reducing or “developing” solution, and it is darkened by black metallic silver in density exactly proportional to the light that struck it.

The action of light-sensitive silver salts in photography can be demonstrated. Working under a red safe light, dissolve 1 gram silver nitrate in 30 ml. water and 1 gram potassium iodide in another 30 ml. water. Put 10 drops of each solution in each of two test tubes half filled with plain water and add a little standard photographic developer. You will have a whitish precipitate in the tubes. Take one tube into the light, and this precipitate will quickly turn black, the silver iodide changing into metallic silver under the influence of the light and the developer.

Again working under the safe light, complete the photographic process by adding a concentrated solution of hypo to both tubes, shake them for a minute or two so the “fixer” will dissolve the iodide that has not been acted upon by light and prevent its later conversion into black silver. The solution that was not exposed clears up completely, while the other becomes clear except for the settling metallic silver.