Simple Devices You Will Find Useful (May, 1929) 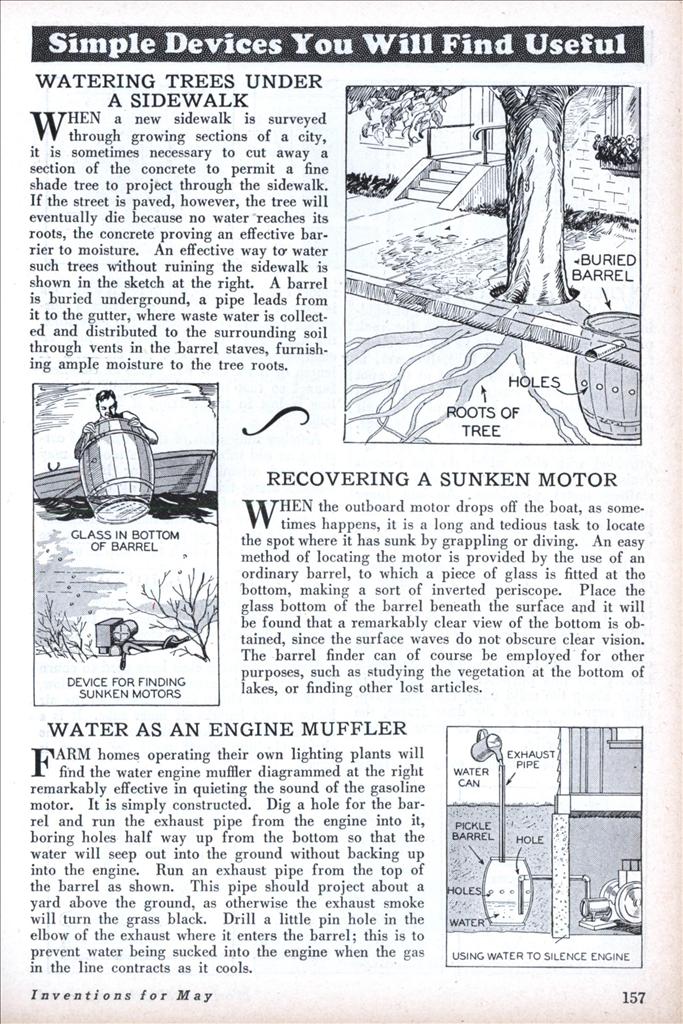 Simple Devices You Will Find Useful

WATERING TREES UNDER A SIDEWALK

WHEN a new sidewalk is surveyed through growing sections of a city, it is sometimes necessary to cut away a section of the concrete to permit a fine shade tree to project through the sidewalk. If the street is paved, however, the tree will eventually die because no water reaches its roots, the concrete proving an effective barrier to moisture. An effective way to- water such trees without ruining the sidewalk is shown in the sketch at the right. A barrel is buried underground, a pipe leads from it to the gutter, where waste water is collected and distributed to the surrounding soil through vents in the barrel staves, furnishing ample moisture to the tree roots.

WHEN the outboard motor drops off the boat, as sometimes happens, it is a long and tedious task to locate the spot where it has sunk by grappling or diving. An easy method of locating the motor is provided by the use of an ordinary barrel, to which a piece of glass is fitted at the bottom, making a sort of inverted periscope. Place the glass bottom of the barrel beneath the surface and it will be found that a remarkably clear view of the bottom is obtained, since the surface waves do not obscure clear vision. The barrel finder can of course be employed for other purposes, such as studying the vegetation at the bottom of lakes, or finding other lost articles.

WATER AS AN ENGINE MUFFLER

FARM homes operating their own lighting plants will find the water engine muffler diagrammed at the right remarkably effective in quieting the sound of the gasoline motor. It is simply constructed. Dig a hole for the barrel and run the exhaust pipe from the engine into it, boring holes half way up from the bottom so that the water will seep out into the ground without backing up into the engine. Run an exhaust pipe from the top of the barrel as shown. This pipe should project about a yard above the ground, as otherwise the exhaust smoke will turn the grass black. Drill a little pin hole in the elbow of the exhaust where it enters the barrel; this is to prevent water being sucked into the engine when the gas in the line contracts as it cools.