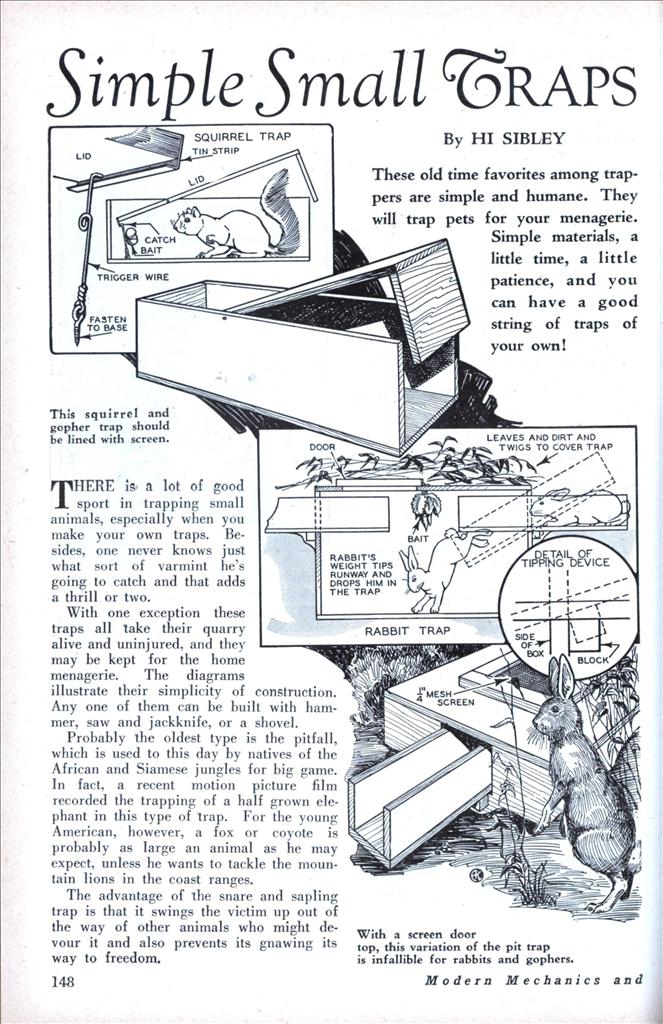 These old time favorites among trappers are simple and humane. They will trap pets for your menagerie.

Simple materials, a little time, a little patience, and you can have a good string of traps of your own!

There is a lot of good sport in trapping small animals, especially when you make your own traps. Besides, one never knows just what sort of varmint he’s going to catch and that adds a thrill or two.

With one exception these traps all take their quarry alive and uninjured, and they may be kept for the home menagerie. The diagrams illustrate their simplicity of construction. Any one of them can be built with hammer, saw and jackknife, or a shovel.

Probably the oldest type is the pitfall, which is used to this day by natives of the African and Siamese jungles for big game. In fact, a recent motion picture film recorded the trapping of a half grown elephant in this type of trap. For the young American, however, a fox or coyote is probably as large an animal as he may expect, unless he wants to tackle the mountain lions in the coast ranges.

The advantage of the snare and sapling trap is that it swings the victim up out of the way of other animals who might devour it and also prevents its gnawing its way to freedom.

This type is more spectacular in action than any of the others, and works beautifully. Select a limber sapling in the game country, attach a stout cord near the tip and draw it down to locate position of release mechanism. Drive a stake (A) firmly into the ground if there are no exposed roots handy, and about 12 inches from it, toward the tree, anchor a limber green twig with a notch near the upper end (C) as shown in the diagram. Now cut a cross stick (B), about 12 inches long, sharpen one end to engage in the notch of (C) and smooth the other end so that the cord loop will slip off when the trap is sprung. From the sapling suspend a soft copper-wire snare-noose so that it hangs four or five inches from the upright stick (C) which holds the bait. To prevent the loop from swinging about, put in light stakes against the bottom in such a manner that they will not interfere with its action when the catch is released. A semi-circular row of stakes around the bait makes it impossible to reach it except through the snare-loop. The bait should be tied to the stock (C). It is well to wear gloves.

The “squirrel” trap is suitable for rabbits and gophers as well as squirrels and chipmunks. Make a box 15 inches long and 6 inches square, with one end and the top left open. The top, with the end attached, is swung on an axis about six inches from the closed end. This assembly should be a trifle narrower than the inside of the box so that it will operate freely.

The rabbit trap: In a good-sized packing box cut holes about 6 in. wide by 7 in. high opposite each other. Dig a hole deep enough to set the box with the bottom of the openings flush with the ground. Make two wooden tunnels or gangways with open tops about 18 in. long to fit loosely in the box openings. These are set a little more than halfway out of the box so that the outer ends rest on the ground, but the weight of the rabbit entering the box to get the bait will tilt the outer end up and slide the captive into the box. Small blocks are nailed to the underside of the tunnels to prevent them sliding into the box with the rabbit.

For small rodents the wire cone trap is a baffling device. They squeeze into it freely in quest of the bait, but every time they try to get out, the wires close on them. Bore a hole in the end of a wooden box. Around the edge of this hole insert a series of short wires that are stiff but with plenty of spring. Bend them toward an apex at the inner ends, just so they are about half as far apart as the diameter of the hole. The wires offer very little resistance to the quarry until it attempts to get out. , The “Figure 4” trap is an old and tried device, but nevertheless a very efficient one. It is very good for birds, but burrowing and gnawing animals can make their way out without much trouble, unless the, box is well weighted and the trapper arrives soon after the catch. This can be made with only a jackknife from sticks about inch square. Larger or smaller will do as well. Details of trap are shown at left above.