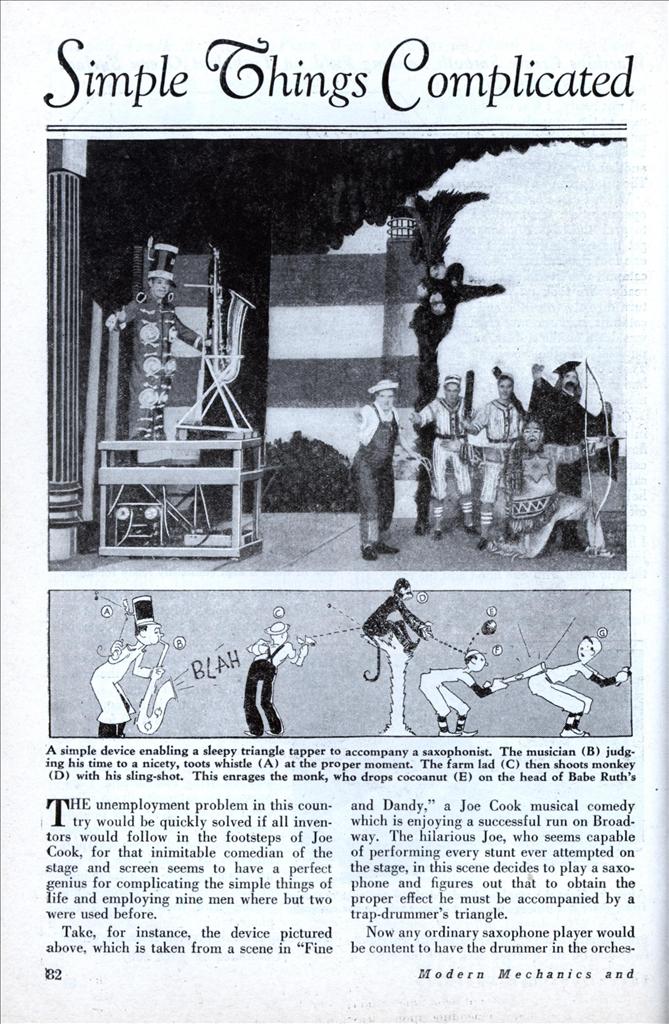 THE unemployment problem in this country would be quickly solved if all inventors would follow in the footsteps of Joe Cook, for that inimitable comedian of the stage and screen seems to have a perfect genius for complicating the simple things of life and employing nine men where but two were used before.

Take, for instance, the device pictured above, which is taken from a scene in “Fine and Dandy,” a Joe Cook musical comedy which is enjoying a successful run on Broadway. The hilarious Joe, who seems capable of performing every stunt ever attempted on the stage, in this scene decides to play a saxophone and figures out that to obtain the proper effect he must be accompanied by a trap-drummer’s triangle.

Now any ordinary saxophone player would be content to have the drummer in the orchestra pit tap the triangle at the proper moment and let it go at that. But not Joe Cook. Joe searches High and low for the world’s champion sleepy triangle tapper, and is then forced to go to the extreme pictured above to wake up the sleeping musician in time to get in the musical “pings” at the proper moment. Another one of Cook’s inventions in this comedy is the “Fruit and Flowers” idea. Joe is in the business of selling fruit and flowers.

and business being somewhat slow, he figures out a way of boosting his trade. It’s a boxing glove at the end of a spring which, when released, strikes the customer in the ribs, breaking two of them.

The customer then goes to the hospital and his friends send him fruit and flowers. All very simple, and it works—on the stage. Of course, if the fruit and flowers are bought elsewhere. Cook loses.