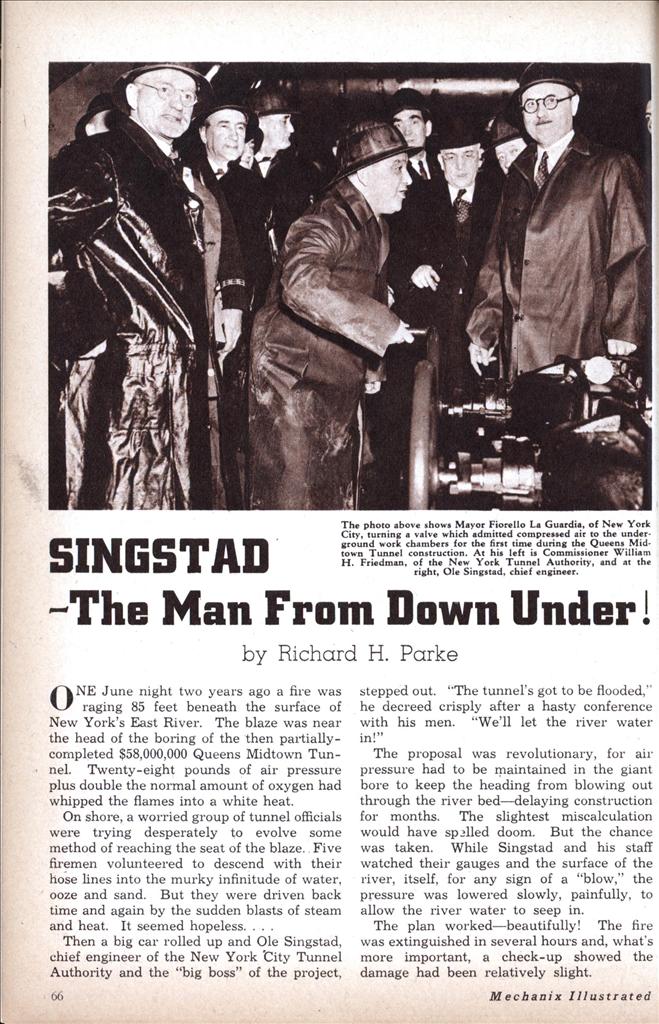 On shore, a worried group of tunnel officials were trying desperately to evolve some method of reaching the seat of the blaze. Five firemen volunteered to descend with their hose lines into the murky infinitude of water, ooze and sand. But they were driven back time and again by the sudden blasts of steam and heat. It seemed hopeless. . . .

Then a big car rolled up and Ole Singstad, chief engineer of the New York ‘City Tunnel Authority and the “big boss” of the project, stepped out. “The tunnel’s got to be flooded,” he decreed crisply after a hasty conference with his men. “We’ll let the river water in!”

The proposal was revolutionary, for air pressure had to be maintained in the giant bore to keep the heading from blowing out through the river bed—delaying construction for months. The slightest miscalculation would have spelled doom. But the chance was taken. While Singstad and his staff watched their gauges and the surface of the river, itself, for any sign of a “blow,” the pressure was lowered slowly, painfully, to allow the river water to seep in.

The plan worked—beautifully! The fire was extinguished in several hours and, what’s more important, a check-up showed the damage had been relatively slight.

“But I never want to go through that experience again,” Mr. Singstad told me recently during an hour’s chat in his office. “That tunnel took four years to build—was nearly completed at the time. It would have been a terrific set-back for us all if the damage had been serious. I’d call it one of the toughest propositions of my career.”

Which, as anyone who knows Ole Singstad will testify, was a real admission. For Singstad, now 58, has built more sub-aqueous vehicular tunnels than any man alive. Mil- lions of motorists daily spin unconcernedly through the tremendous iron-and-steel serpents he has pushed under waterways in all parts of the world.

Here are just a few of the jobs which have sprung from his blueprints: the Holland and Lincoln Tunnels between New York and New Jersey; the George A. Posey tunnel under the Oakland Estuary between Oakland and Alameda, California; the pedestrian and vehicular tunnels under the Scheldt River; Antwerp, Belgium; the tunnel approaches to New York’s George Washington Bridge; the Detroit-Windsor tunnel under the Detroit River and—his latest triumph—the Queens Midtown Tunnel.

Mr. Singstad, who at the moment is hard at work on the $75,000,000 Brooklyn-Battery Tunnel for which ground was broken by President Roosevelt on Oct. 8, 1940, agreed quickly that sub-aqueous work is the most difficult form of tunneling. Always there is the remorseless weight of water, mud and silt to contend with while the gigantic shaft is being jammed through the river bed. Always the grimy, daring sand hogs, working under compressed air piped through writhing hoselines, face death or injury from machinery, loosened boulders, explosions, falls.

Take that May afternoon in 1937. Twenty men were at work in the north tube of the Lincoln Tunnel trimming off jutting rocks in the tunnel wails. The shriek and rattle of the drills, the dull thud of the hydraulic jacks made an unearthly bedlam. The men cursed, grinned and sweated at their tasks in the dim light from the tiny, unshaded bulbs suspended overhead.

Suddenly there was a mighty roar—a power drill operated by one of the men had struck an unexploded dynamite charge! The workmen were knocked down like tenpins as showers of ragged rock chunks struck them directly or ricocheted off the walls. By the time rescue crews arrived, three of the men were dead, four others injured seriously and a dozen more badly bruised. Little time was lost, however, for replacements quickly appeared and the laborious hacking, chipping and shoveling continued on schedule.

No train dispatcher is more conscious of the necessity for keeping “on schedule” than the tunnel engineer, and accidents play havoc with carefully-laid plans. Actually, however, there are comparatively few mishaps in tunnel work nowadays, thanks to the elaborate precautions taken from the moment the engineers get to work with their transits, verniers and trigonometry to lay out the tunnel’s march until the day when the construction gangs punch their time clocks for the last time.

Sometimes the precautions begin even before the first blueprint is drawn. A few years ago New Yorkers in the fashionable apartment houses lining the city’s East River rubbed their eyes in amazement when they began seeing an odd flotilla of rowboats and flat-bottomed barges anchored each day in the middle of the busy waterway. Queer-looking machinery and instruments sprouted from the decks of the strange craft, and passing tugs, ferries and excursion steamers gave the mysterious mariners a wide berth.

The explanation was simple: the vessels were manned by engineers sent by Singstad to drill exploratory borings into the river bed in preparation for the construction of the Queens Midtown Tunnel. It was a precaution which Singstad took because he knew that section of the river bed had long been classified as “difficult ground” by subaqueous experts. The classification meant that, in the course of construction, the tunnel would strike many different combinations of bed rock, decomposed rock, sand, gravel, clay, mud, silt, boulders and even coal from overturned barges!

The data obtained from the borings were analyzed scientifically by Professor Charles Berkey of Columbia University, consulting geologist of the New York Tunnel Authority. As a result of his findings, it was possible to advance the four shields used in the construction work with a reasonable knowledge of what types of strata lay ahead!

Of course, building an underwater tunnel is slow work—it literally inches along at the rate of only a few feet a day. The tunnel shell, formed of cast-iron rings bolted one behind the other, is preceded by a huge cylindrical monster known as a shield. Openings in the shield permit the sand hogs to excavate directly in front of it. As space is cleared, the shield is pushed forward by gargantuan hydraulic jacks until there is room for a new ring to be set in place at its tail. The rings are added with each push—thus the tunnel grows!

Ever ride through the Holland Tunnel in your car? An easy, effortless and safe trip, wasn’t it? Well, don’t be alarmed when you learn that certain sections of this sturdy old tube—the granddaddy of all sub-aqueous vehicular tunnels—rise and fall with the Hudson River tides. The reason is simply that part of the tunnel rests on river silt and another section, near the New York pierhead line, on a ledge of rock. Upon the rock the tunnel resists the tides but where it leaves the rock and enters silt, immobility leaves off and mobility sets in.

Singstad wasn’t caught napping by this phenomenon. No, indeed. He lined the mobile section with cast steel instead of the cast iron used elsewhere. The greater tensile strength of steel absorbs the strain, making the so-called “bending” perfectly harmless.

Less dramatic, perhaps, but even more important was Singstad’s other contribution to the Holland Tunnel job—the system of ventilation he designed for the giant conduit, a system which has since become standard on all sub-aqueous vehicular tunnels. His problem, briefly, had been to devise a means by which fresh air could be introduced artificially into the 9,250-foot tube while, at the same time, the carbon-monoxide poisoned air was being expelled.

“Gale-jacketing” was the answer. A pumping chamber between the roadway floor and the circular outer shell of the tube and an exhaust chamber in the space between the ceiling and the top of the shell contain roaring air streams. The good air enters the tunnel from vents near the floor and is sucked up through exhaust vents overhead. Powerful blower fans in buildings on shore change the air completely 42 times an hour —about once every minute-and-a-half!

Oddly enough, Ole Singstad began his career above ground—designing bridges. That was back in 1905, the year he arrived in the United States from his native Norway. He was virtually penniless but the engineering degree he had won before at the Polytechnic Institute of Trondheim landed him a job with the Central Railroad of New Jersey.

He worked for several other railroads after that but in 1909 embarked on his mole-like profession as a designer for the Hudson River tunnels of the Hudson Manhattan Railroad in New York. There followed similar work on the I.R.T. subway tubes under the East River and then, in 1919, he got his first big break with the Holland Tunnel project.

“There are going to be a lot more tunnels built in this country in the future,” Mr. Singstad told me. “I don’t mean they will replace bridges entirely, of course. But we have proved pretty conclusively that, especially in large cities, the tunnel in the long run is the most economical method of spanning a body of water.

“It comes down to this: a bridge requires approaches nearly a mile in length. Not only are they unsightly affairs but they damage, if not totally destroy, real estate values in the area. A tunnel needs an approach of only a block or two— and no overhead structure. Surrounding property is hardly disturbed at all by tunnel approaches.”

I asked him whether he thought graduates of engineering schools might not find jobs on tunnel projects increasingly available.

“Definitely,” he replied. “The field is expanding rapidly and will expand still further. Moreover, tunnel work gives employment for a number of years on one job alone. If I were back in engineering school again, I’d make it my business to specialize in tunnel building right from the start. It’s a fascinating career!”