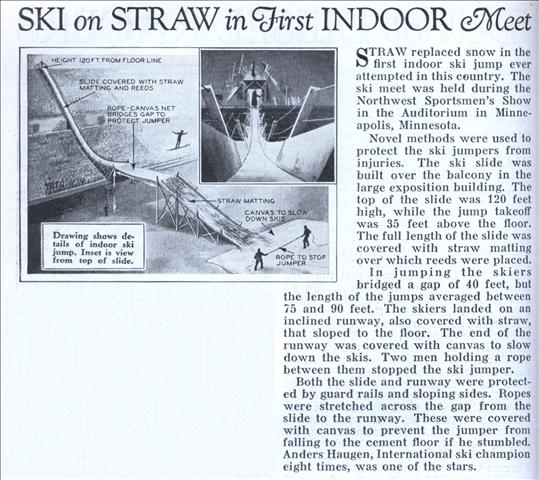 STRAW replaced snow in the first indoor ski jump ever attempted in this country. The ski meet was held during the Northwest Sportsmen’s Show in the Auditorium in Minneapolis, Minnesota.

Novel methods were used to protect the ski jumpers from injuries. The ski slide was built over the balcony in the large exposition building. The top of the slide was 120 feet high, while the jump takeoff was 35 feet above the floor. The full length of the slide was covered with straw matting over which reeds were placed. In jumping the skiers bridged a gap of 40 feet, but the length of the jumps averaged between 75 and 90 feet. The skiers landed on an inclined runway, also covered with straw, that sloped to the floor. The end of the runway was covered with canvas to slow down the skis. Two men holding a rope between them stopped the ski jumper.

Both the slide and runway were protected by guard rails and sloping sides. Ropes were stretched across the gap from the slide to the runway. These were covered with canvas to prevent the jumper from falling to the cement floor if he stumbled. Anders Haugen, International ski champion eight times, was one of the stars.