Mechanix Illustrated
Issue: May, 1947
Posted in: Personal Appearance
Tags: tattoos
3 Comments on Skinful of Art (May, 1947) 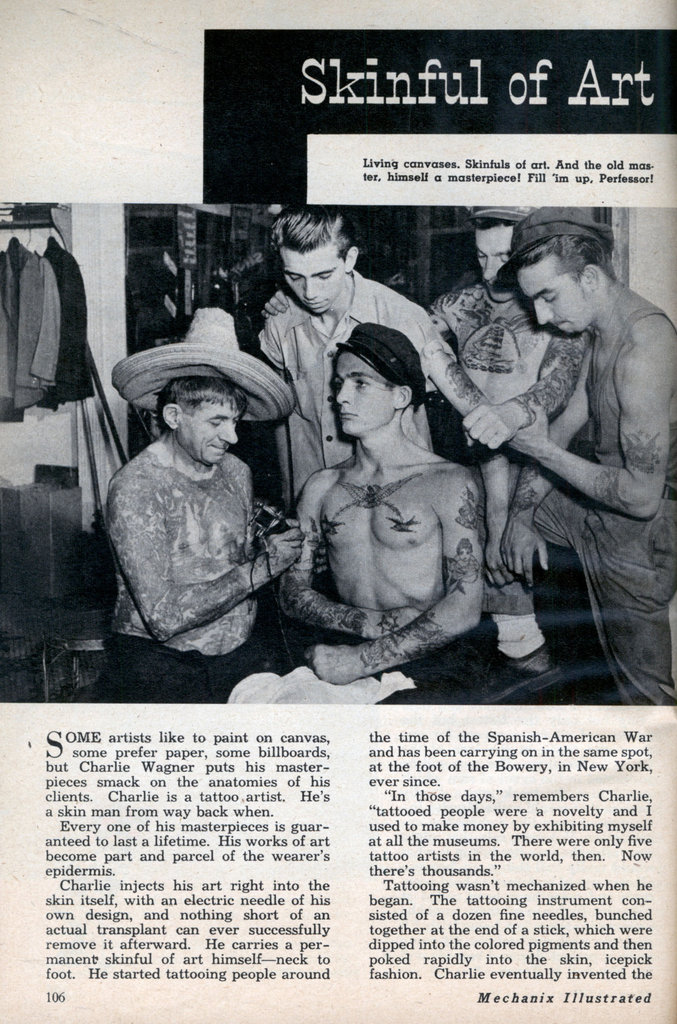 SOME artists like to paint on canvas, some prefer paper, some billboards, but Charlie Wagner puts his masterpieces smack on the anatomies of his clients. Charlie is a tattoo artist. He’s a skin man from way back when.

Every one of his masterpieces is guaranteed to last a lifetime. His works of art become part and parcel of the wearer’s epidermis.

Charlie injects his art right into the skin itself, with an electric needle of his own design, and nothing short of an actual transplant can ever successfully remove it afterward. He carries a permanent? skinful of art himselfâ€”neck to foot. He started tattooing people around the time of the Spanish-American War and has been carrying on in the same spot, at the foot of the Bowery, in New York, ever since.

“In those days,” remembers Charlie, “tattooed people were a novelty and I used to make money by exhibiting myself at all the museums. There were only five tattoo artists in the world, then. Now there’s thousands.”

Tattooing wasn’t mechanized when he began. The tattooing instrument consisted of a dozen fine needles, bunched together at the end of a stick, which were dipped into the colored pigments and then poked rapidly into the skin, icepick fashion. Charlie eventually invented the electric needle, an electromagnetic vibrator affair which pokes the needles into the skin at the rate of 3,000 times a minute. He uses two machines for his work, one having a four-needle setup to fill in the broad areas with color. The needles penetrate to a depth of one thirty-secondth of an inch. In his spare time Charlie builds and sells these machines to other members of his profession.

Before starting, Charlie shaves off any hair growing in the area and smears on mentholatum. Working freehand, then, he makes a rough pen and India ink sketch of the design, dips his electric needle in black ink dye (which later turns blue), and proceeds to tattoo the outline. He brightens up the design with vivid, chemically pure colors, using his fill-in needle. The after treatment consists of an antiseptic wash and bandage. The art heals in from four to seven days.

In the past, tattooing carried the danger of infection. Careless tattooists sometimes moistened their needles with saliva and thus transmitted diseases to their subjects. Cases of syphilis, tuberculosis of the skin, leprosy, tetanus, and erysipelis have been recorded in medical literature. Today, antisepsis eliminates such possibilities, however. The color pigments used are pure powders dissolved right in an antiseptic. Brown, yellow, green, red and black (which turns blue afterward) are the most popular colors used.

The urge that drives a person to have his anatomy so decorated has been the study of many psychologists. Children who draw ink pictures on their hands and wrists are displaying this urge.

Every war brings thousands of new subjects to the tattoo studios.

“I git all kinds,” says Charlie. “Kids fall in love. They come in here and I put hearts on ’em and names of their goil friends. Two weeks later, ‘blackout’ they busted up, and the kid comes back to have the name took off. I can’t take it off, so I cover it up with nice flowers. There’s more people wanta git their tattoos taken off than put on. It can’t be done.”‘

Wartime patriotism is a strong motive for getting tattooed. Thousands of servicemen are sporting such patriotic emblems as American eagles, ships, Army and Navy insignia, and elaborate “Remember Pearl Harbor” designs. Proud two- and three-stripers have their stripes permanently tattooed on their arms. Discharged vets have their discharge emblems tattooed on.

The artistic nude is a great favorite. During the war, many a nude-carrier ran afoul of his commanding officer and was ordered back to the tattoo studio to get his nekkid lady dressed up. Charlie would smoke-screen them with flowers and bathing suits. Of course, many of these nudes are not so artistic. In fact, some feature nothing but curves, with plenty of flesh between. No doubt many of these thick ones got their puffs and sags innocently enough, when their wearer in the course of time put on flesh in those places.

A questionable sense of humor is displayed by some living canvases. Fairly common are women who have bras and panties tattooed on themselves. One guy who had been wronged by two women had their portraits forever inscribed where it was convenient to sit on them.

As might be expected, there are cases where the humor is even more obvious.

Believe it or not, tattooing has its more useful aspects. Charlie is frequently called to hospitals to treat certain skin diseases with his vibrating electric needle. In plastic surgery his needle, dipped into flesh-color dyes, has been used to blend skin grafts to match the surrounding epidermis. It has served to cover up skin blemishes. In one unusual case, where a young girl suffering from cancer had a portion of the breast removed, Charlie did an expert job of matching it to the good one by tattooing a new central design on it.

Charlie’s most difficult client was a white Vat, brought in by a young biologist who wanted Charlie to tattoo an identification number on its tail. “Holding that tail down was a job,” laughs Charlie. “That rat didn’t like the idea at all. He got away once and we had a heckuva time catchin’ him. And that wiggling tail wasn’t easy to work on, either.

“Gimme plenty of skin, anytime. That’s the stuff I like to work on.”