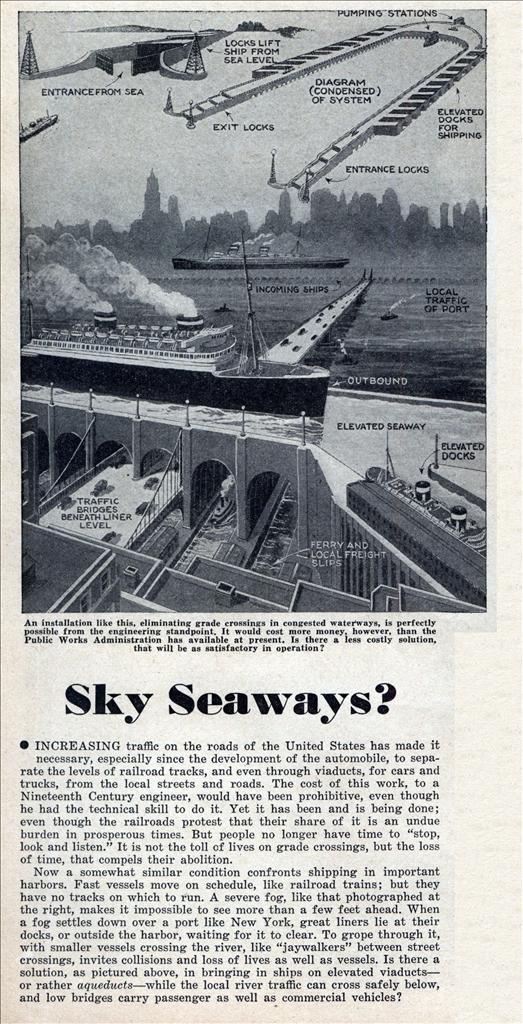 INCREASING traffic on the roads of the United States has made it necessary, especially since the development of the automobile, to separate the levels of railroad tracks, and even through viaducts, for cars and trucks, from the local streets and roads. The cost of this work, to a Nineteenth Century engineer, would have been prohibitive, even though he had the technical skill to do it. Yet it has been and is being done; even though the railroads protest that their share of it is an undue burden in prosperous times. But people no longer have time to “stop, look and listen.” It is not the toll of lives on grade crossings, but the loss of time, that compels their abolition.

Now a somewhat similar condition confronts shipping in important harbors. Fast vessels move on schedule, like railroad trains; but they have no tracks on which to run. A severe fog, like that photographed at the right, makes it impossible to see more than a few feet ahead. When a fog settles down over a port like New York, great liners lie at their docks, or outside the harbor, waiting for it to clear. To grope through it, with smaller vessels crossing the river, like “jaywalkers” between street crossings, invites collisions and loss of lives as well as vessels. Is there a solution, as pictured above, in bringing in ships on elevated viaducts— or rather aqueducts—while the local river traffic can cross safely below, and low bridges carry passenger as well as commercial vehicles?