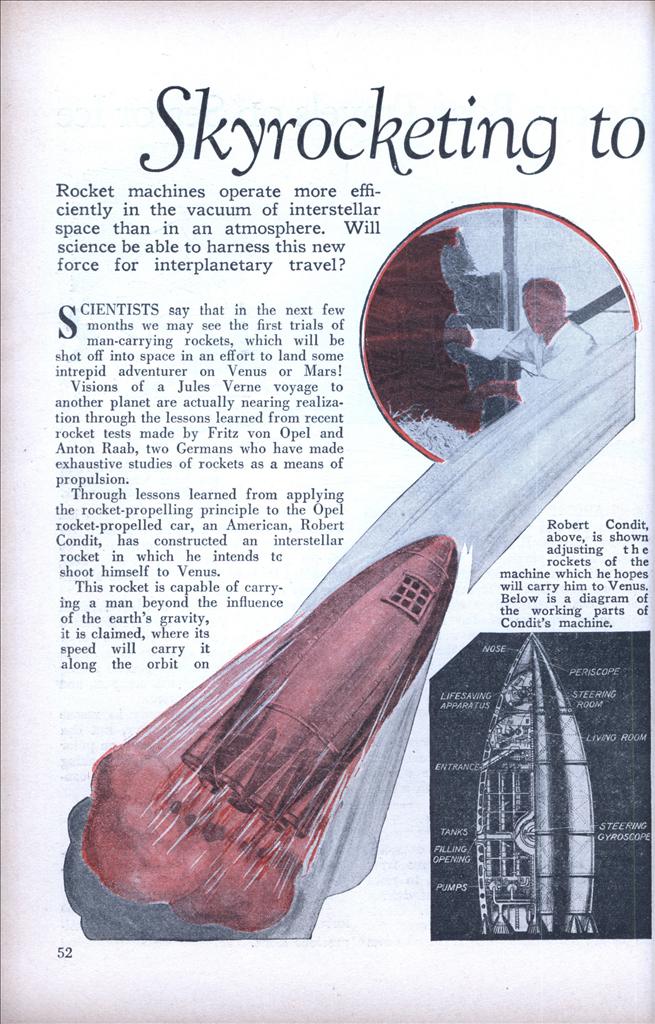 Will Man Ever Reach the Red Planet?

Rocket machines operate more efficiently in the vacuum of interstellar space than in an atmosphere. Will science be able to harness this new force for interplanetary travel?

SCIENTISTS say that in the next few months we may see the first trials of man-carrying rockets, which will be shot off into space in an effort to land some intrepid adventurer on Venus or Mars! Visions of a Jules Verne voyage to another planet are actually nearing realization through the lessons learned from recent rocket tests made by Fritz von Opel and Anton Raab, two Germans who have made exhaustive studies of rockets as a means of propulsion.

Through lessons learned from applying the rocket-propelling principle to the Opel rocket-propelled car, an American, Robert Condit, has constructed an interstellar rocket in which he intends to shoot himself to Venus.

This rocket is capable of carrying a man beyond the influence of the earth’s gravity, it is claimed, where its speed will carry it along the orbit on which it is aimed until it reaches the gravitational influence of another planet. Large tubes project tailward, emitting the chemically produced gases, which by their jet propulsion shoot the rocket into the heavens.

Astronautical voyages are not a new idea. An obscure contemporary of Jules Verne, one Achille Ayraud, upon coming across notes made by an earlier scientist, proposed a trip to the moon a century ago.

This is the idea credited with furnishing Verne his theme for the story “From the Earth to the Moon.”

After Jules Verne’s time, when military science had advanced to the study of ballistics, Robert Esnault Pelterie, one of the most original scientific minds of France and a noted designer of airplanes, carefully estimated the weights and forces needed to propel a rocket ship to the moon, and found the idea not only feasible technically, but projected a plan for its accomplishment before the Societe Francaise de Physique in the year 1912.

From that time to the present, one experimenter after another has made tests on various rocket-propelled devices. One May day in 1928 a rocket engine was fitted to an Opel special car at the Avus Speedway in Berlin to see what effect such a gaseous jet motor for rocket driving would have when installed on an auto.

At about the same time it was announced that the rocket propulsion principle was being applied to the airplane by Anton Raab, famous German aviator. It is rumored that Junkers, the famous German plane builder, is also working on a plane which will be designed to shoot through the heavens from Europe to America, taking advantage of the rarefied atmosphere in attaining the enormous speed of 300 miles an hour while carrying a load of passengers in a hermetically sealed cabin.