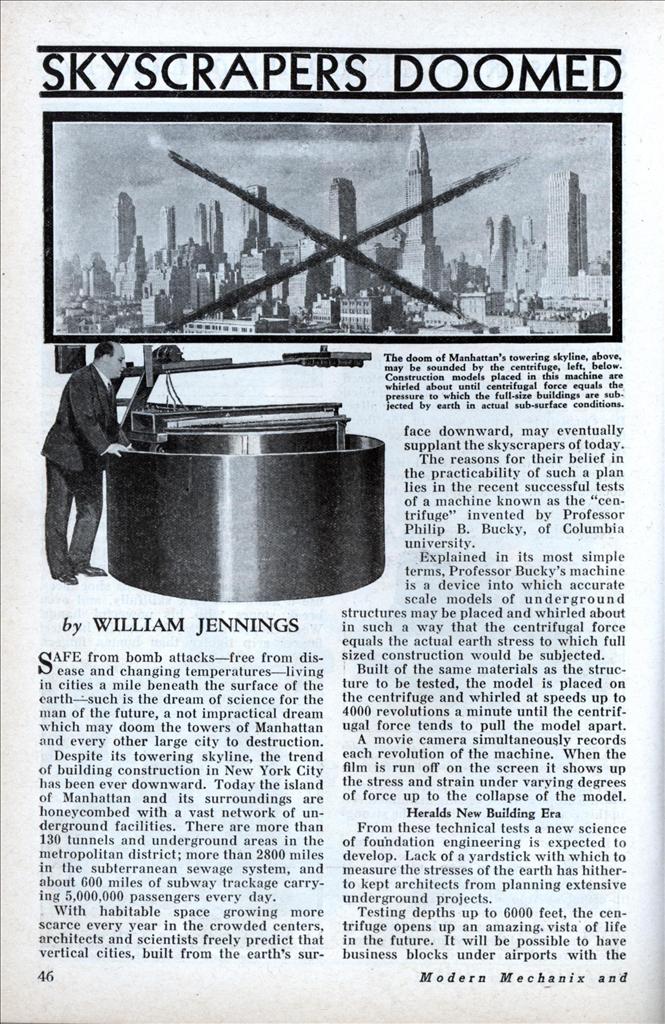 SAFE from bomb attacksâ€”free from disease and changing temperaturesâ€”living in cities a mile beneath the surface of the earthâ€”such is the dream of science for the man of the future, a not impractical dream which may doom the towers of Manhattan and every other large city to destruction.

Despite its towering skyline, the trend of building construction in New York City has been ever downward. Today the island of Manhattan and its surroundings are honeycombed with a vast network of underground facilities. There are more than 130 tunnels and underground areas in the metropolitan district; more than 2800 miles in the subterranean sewage system, and about GOO miles of subway trackage carrying 5,000,000 passengers every day.

With habitable space growing more scarce every year in the crowded centers, architects and scientists freely predict that vertical cities, built from the earth’s surface downward, may eventually supplant the skyscrapers of today. The reasons for their belief in the practicability of such a plan lies in the recent successful tests of a machine known as the “centrifuge” invented by Professor Philip B. Bucky, of Columbia university.

Explained in its most simple terms, Professor Bucky’s machine is a device into which accurate scale models of underground structures may be placed and whirled about in such a way that the centrifugal force equals the actual earth stress to which full sized construction would be subjected.

Built of the same materials as the structure to be tested, the model is placed on the centrifuge and whirled at speeds up to 4000 revolutions a minute until the centrifugal force tends to pull the model apart. A movie camera simultaneously records each revolution of the machine. When the film is run off on the screen it shows up the stress and strain under varying degrees of force up to the collapse of the model. Heralds New Building Era From these technical tests a new science of foundation engineering is expected to develop. Lack of a yardstick with which to measure the stresses of the earth has hitherto kept architects from planning extensive underground projects.

Testing depths up to 6000 feet, the centrifuge opens up an amazing, vista of life in the future. It will be possible to have business blocks under airports with the surface left clear for planes. Vast subterranean caverns could be constructed, capable of sheltering entire populations against enemy bomb attacks. Office buildings, factories, homes and theatersâ€”all could be sunk into bedrock.

Life underground would be different only in the respect that conditions, under scientific control, would be more sanitary and healthful. Conditioned air would prevail and the sun’s absence compensated for by the use of ultra-violet lamps. The temperature would be constant at about 62 degrees. Coal bills would no longer worry the householder and bacteria would be killed.

Professor Bucky does not venture to make extravagant predictions. His centrifuge does not construct; it merely tests. The advantage of the machine lies in the fact that the safety of underground buildings may be absolutely proven by testing miniature models.