Modern Mechanix
Issue: Nov, 1929
Posted in: Origins
Tags: how its made
5 Comments on SLICING BREAD by Machinery (Nov, 1929) 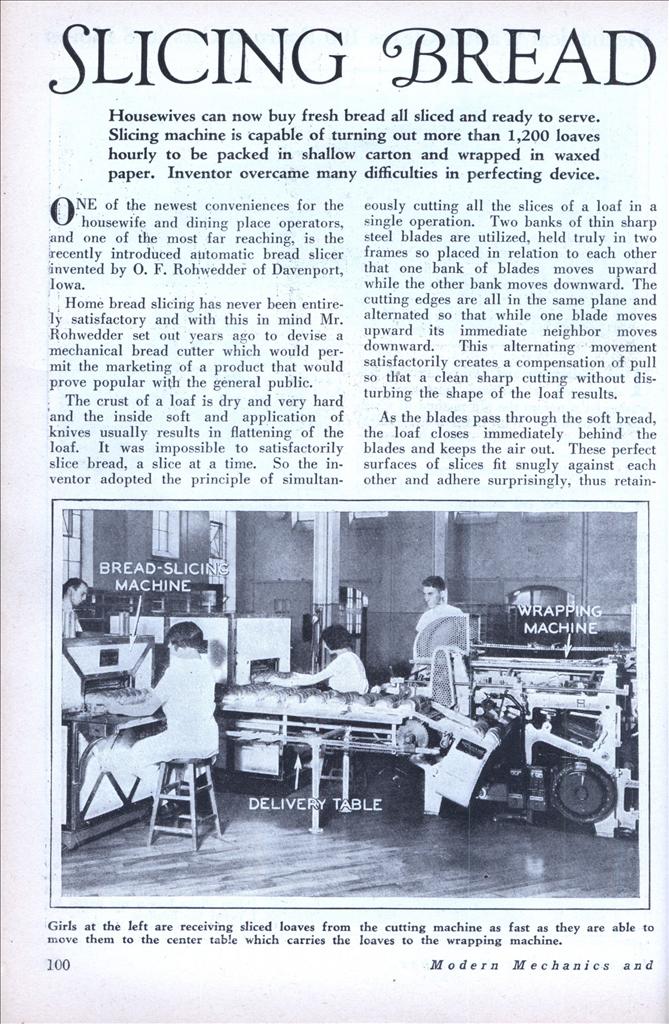 Housewives can now buy fresh bread all sliced and ready to serve. Slicing machine is capable of turning out more than 1,200 loaves hourly to be packed in shallow carton and wrapped in waxed paper. Inventor overcame many difficulties in perfecting device.

ONE of the newest conveniences for the housewife and dining place operators, and one of the most far reaching, is the recently introduced automatic bread slicer invented by O. F. Rohwedder of Davenport, Iowa.

Home bread slicing has never been entirely satisfactory and with this in mind Mr. Rohwedder set out years ago to devise a mechanical bread cutter which would permit the marketing of a product that would prove popular with the general public.

The crust of a loaf is dry and very hard and the inside soft and application of knives usually results in flattening of the loaf. It was impossible to satisfactorily slice bread, a slice at a time. So the inventor adopted the principle of simultaneously cutting all the slices of a loaf in a single operation. Two banks of thin sharp steel blades are utilized, held truly in two frames so placed in relation to each other that one bank of blades moves upward while the other bank moves downward. The cutting edges are all in the same plane and alternated so that while one blade moves upward its immediate neighbor moves downward. This alternating movement satisfactorily creates a compensation of pull so that a clean sharp cutting without disturbing the shape of the loaf results.

As the blades pass through the soft bread, the loaf closes immediately behind the blades and keeps the air out. These perfect surfaces of slices fit snugly against each other and adhere surprisingly, thus retaining the freshness of the bread.

Means for carrying the loaf to the blades and passing the loaf through the blades are but few of the many mechanical difficulties which have been overcome. The machine has been developed until today it is capable of perfectly slicing 1,200 to 1,400 loaves per hour.

Many recognized leaders of the baking industry have declared that sliced bread is a sound practical improvement; that it is the greatest single advance in baker procedure in almost a quarter of a century; that in a few years almost all bread will be sold sliced; that sliced bread will definitely increase the consumption of bread.

The machine is adjustable so that unsold loaves may be returned to it instead of being sold as stale for chicken feed. The unsold bread may be sent through the blades again and long squared shapes secured, placed in the oven, and sold as toasting sticks.

During the years of research which preceded the actual marketing of sliced bread, an exhaustive research, involving the interviewing of some 30,000 housewives, was conducted for the purpose of determining a thickness of slice which would be most nearly universal in acceptance.

This innovation which is declared to be the greatest single development in the industry since the practice of wrapping bread was first adopted was first tried out in a little Missouri town perhaps on the theory that if the Missourians could be convinced of the desirability of sliced bread in a wrapper the rest of the nation could be won over. The results of the new machine were popular and soon the tests were extended to larger cities where the inventor’s dream of years is declared to have been vindicated.

The sliced loaves are wrapped with wax paper in the usual manner. Instead of removing the entire wrapper at the time of serving the bread, the wrapper is opened at one end and folded back. This discloses a shallow paper carton in which the loaf rests in a succession of closely adjacent slices. These slices are neat and exact. Only by mechanical means could this precision be obtained and the housewife who takes pride in the technical niceties of food service accepts this new development with enthusiasm.

It is interesting to note that the man who conceived the idea of the sliced bread machine worked for years to develop it.