Small wonder: a breadbox-size computer with up to 1 million bytes of fault-control, semiconductor memory at 5c a byte. (Sep, 1977) 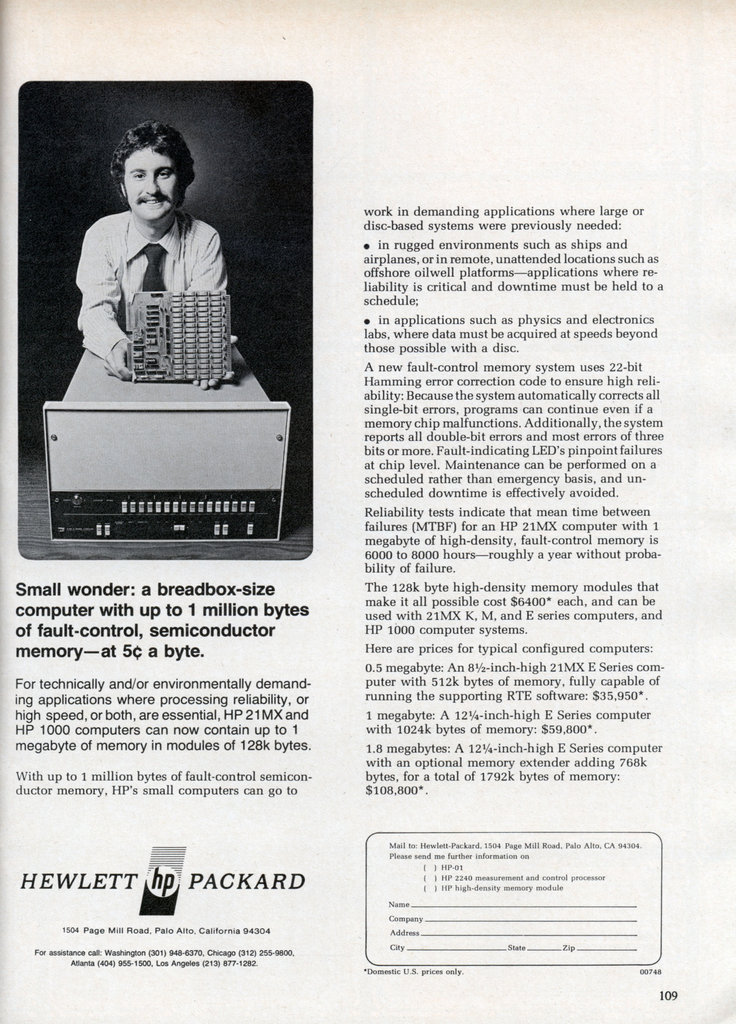 Small wonder: a breadbox-size computer with up to 1 million bytes of fault-control, semiconductor memory at 5c a byte.

For technically and/or environmentally demanding applications where processing reliability, or high speed, or both, are essential, HP 21 MX and HP 1000 computers can now contain up to 1 megabyte of memory in modules of 128k bytes.

With up to 1 million bytes of fault-control semiconductor memory, HP’s small computers can go to work in demanding applications where large or disc-based systems were previously needed:
* in rugged environments such as ships and airplanes, or in remote, unattended locations such as offshore oil well platforms applications where reliability is critical and downtime must be held to a schedule;
* in applications such as physics and electronics labs, where data must be acquired at speeds beyond those possible with a disc.

A new fault-control memory system uses 22-bit Hamming error correction code to ensure high reliability: Because the system automatically corrects all single-bit errors, programs can continue even if a memory chip malfunctions. Additionally, the system reports all double-bit errors and most errors of three bits or more. Fault-indicating LED’s pinpoint failures at chip level. Maintenance can be performed on a scheduled rather than emergency basis, and unscheduled downtime is effectively avoided.

Reliability tests indicate that mean time between failures (MTBF) for an HP 21MX computer with 1 megabyte of high-density, fault-control memory is 6000 to 8000 hours -roughly a year without probability of failure.

The 128k byte high-density memory modules that make it all possible cost $6400* each, and can be used with 21MX K, M, and E series computers, and HP 1000 computer systems.