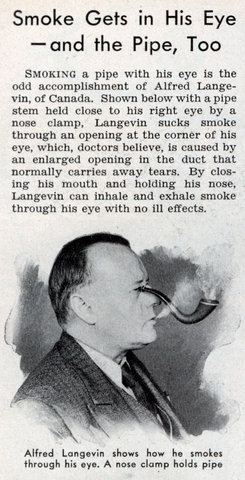 Smoke Gets in His Eye â€” and the Pipe, Too

Smoking a pipe with his eye is the odd accomplishment of Alfred Langevin, of Canada. Shown below with a pipe stem held close to his right eye by a nose clamp, Langevin sucks smoke through an opening at the corner of his eye, which, doctors believe, is caused by an enlarged opening in the duct that normally carries away tears. By closing his mouth and holding his nose, Langevin can inhale and exhale smoke through his eye with no ill effects.