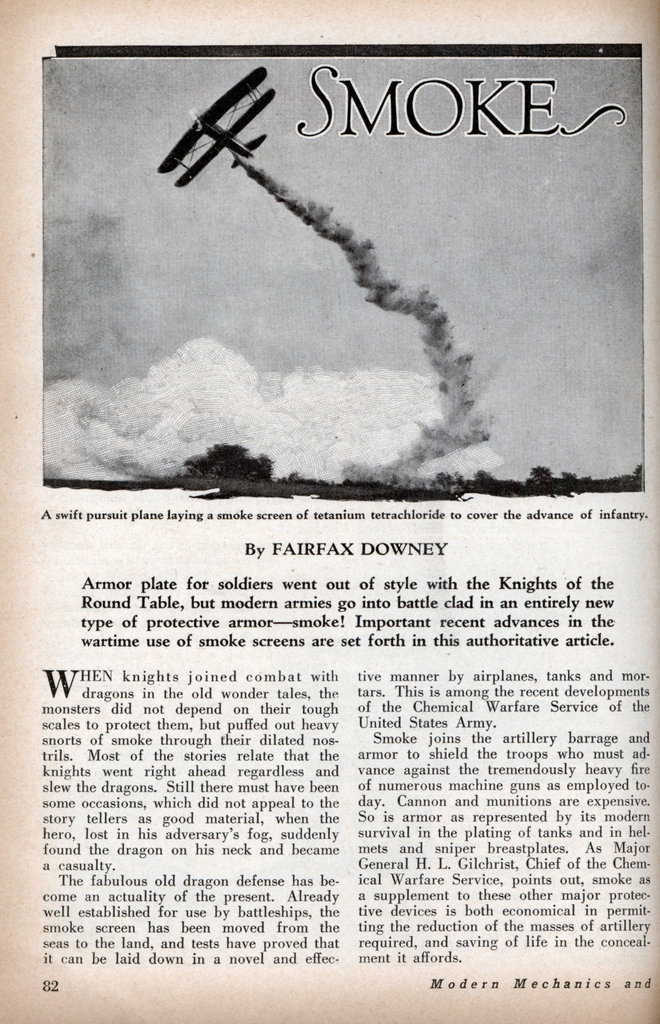 Armor plate for soldiers went out of style with the Knights of the Round Table, but modern armies go into battle clad in an entirely new type of protective armorâ€”smoke! Important recent advances in the wartime use of smoke screens are set forth in this authoritative article.

WHEN knights joined combat with dragons in the old wonder tales, the monsters did not depend on their tough scales to protect them, but puffed out heavy snorts of smoke through their dilated nostrils. Most of the stories relate that the knights went right ahead regardless and slew the dragons. Still there must have been some occasions, which did not appeal to the story tellers as good material, when the hero, lost in his adversary’s fog, suddenly found the dragon on his neck and became a casualty.

The fabulous old dragon defense has become an actuality of the present. Already well established for use by battleships, the smoke screen has been moved from the seas to the land, and tests have proved that it can be laid down in a novel and effective manner by airplanes, tanks and mortars. This is among the recent developments of the Chemical Warfare Service of the United States Army.

Smoke joins the artillery barrage and armor to shield the troops who must advance against the tremendously heavy fire of numerous machine guns as employed today. Cannon and munitions are expensive. So is armor as represented by its modern survival in the plating of tanks and in helmets and sniper breastplates. As Major General H. L. Gilchrist, Chief of the Chemical Warfare Service, points out, smoke as a supplement to these other major protective devices is both economical in permitting the reduction of the masses of artillery required, and saving of life in the concealment it affords.

“Smoke is about the only possible protection other than the speed of the mechanized force itself, against the semi-automatic weapons, ” said Maj. Gen. Gilchrist, a veteran of the Spanish and the World wars. The Infantry Board has carried out a test of the smoke screen apparatus for tanks. The board found that the mechanical elements and their functioning were in general mechanically satisfactory, and that the smoke properly laid down will assist in the advance of attacking riflemen.

Tanks advancing under cover of clouds of smoke in which they envelop themselves will not only afford a greater degree of safety for their accompanying infantry but for their own advance. In spite of increased speed and higher proof armor, tanks are still vulnerable to direct hits by field artillery and the lighter types can be put out of action by the armor-piercing bullets of heavy machine guns. Smoke shields will do much to destroy the accuracy of anti-tank fire.

Another new agency for the spread of the smoke screen is the low-flying airplane.

“Specifications for the construction of atomizing apparatus for airplanes have been prepared, and instructions for their use have been written, ” Maj. Gen. Gilchrist declared. “A number of these apparatuses have been constructed and successfully employed for the production of smoke screens in a great number of demonstrations and field tests. ”

The airplane atomizers are an adaptation to special war use of the smoke spreading machines used by airplanes for combating boll weevils and other insect pests and for sky writing. They make of a plane a great rocket with a dense column of smoke for its train. Tetanium tetrachloride, which combines with the moisture of the air to form a dense, white smoke, is the chemical sprayed from the atomizers.

Airplanes equipped with atomizers may be employed not only to thicken the tank smoke screen for advancing infantry, but as an auxiliary to their own arm, the air service. Smoke apparatus may be installed on the swiftest pursuit planes to allow them to blanket an anti-aircraft position or a column of infantry or artillery on the road. The speed of these planes will reduce their own hazard. After them will follow the slower, more vulnerable bombing planes which thus will be able to attack in comparative safety targets which are both clearly defined by the narrow column of smoke, enclosing them and largely prevented from returning an effective fire by its blanketing clouds.

Smoke shells for forming heavy clouds in the positions of the enemy to confuse their aim and force the use of masks are still in the province of the field artillery. Smoke is also used in the Livens projectors, high-angled tubes buried in the earth in a row and firing their bombs when detonated by an electrical connection. But high explosive shell or shrapnel is usually a more useful ammunition for field artillery, as the projectors are limited to a range of 1, 500 yards; this involves difficulties in locating them so far forward, and their usefulness is also impaired by their lack of mobility. The preeminent weapon for smoke bombs is the Stokes mortar, which is now rifled. Copper rotating plates fitted around the base of the new projectile expand slightly on the explosion of the powder charge, catching in the rifling grooves and giving the mortars greater accuracy and a range increased to 2, 500 yards.

This flexibility has been added to by an innovation in the training of the experimental mechanized force at Fort Meade, Md., where platoons have been armed with 4. 2 chemical mortars mounted on hand carts. To accompany a motor transport train, the mortar carts and their gun crews are carried in trucks. Unloaded from the trucks in the vicinity of the “front, ” the cart platoons have no difficulty keeping pace with the infantry in attack problems. Mechanization and the use of the smoke screen follows the recommendation of Gen. Charles P. Summerall, Chief of Staff, who stressed the fact that the army must to the fullest practicable degree use machines in place of man power in order that our man power can occupy and hold positions without terrific losses incident to modern fire-power.

The Chemical Warfare Service is now organizing a most unique unit, a field laboratory chemical company, one of which will be included in the strength of each field army of our forces.

“Such a laboratory, ” Maj. Gen. Gilchrist declared, “is necessary in order that enemy compounds, if used, may be analyzed and protection secured. ” It will readily be understood that quick action would save many lives in the event of an enemy springing a surprise attack with a new chemical agent. Instead of having to depend on the collection of data by line troops without chemical training and undergoing the delay of transmission to a laboratory at a base, the field unit, which is motorized, will soon be on the spot. Its experts will have their equipment at hand to solve the problem and plan counter-measures.

The scientific nature of modern warfare is epitomized by the tables of organization of this unit. It will consist of both a chemis try and a physics laboratory with all the required apparatus and instruments. The personnel, under the command of a major, will consist of officers who are chemists and physicists, with master sergeants and other trained non-commissioned officers for their assistants. Two officers will be mechanical engineers. There will be two translators whose duty it will be to decipher the marks on enemy shells and fragments and interpret captured books of instructions for new devices in use by the enemy and other documents obtained. Special munitions handlers will bring in the enemy’s duds or unexploded shells for analysis of their content. Samples of contaminated soil and materials will be analyzed for new enemy chemical agents and emergency protection devised. It is probable that the laboratories will be called on for advice in cases where there is a contamination by persistent gases of places which can not be evacuated and which do not readily respond to the ordinary de-gassing measures. Draftsmen and mechanics are on the roster to aid the scientists in devising up-to-the-minute protection. Orderlies, cooks and other personnel required by an army outfit complete the unit.

Details of the post-war gas masks already are known; its elimination of the old uncomfortable nose clip and mouth piece, the passing of the breath inhalations of the wearer over the eye pieces to clear them, and in the type for troops requiring a communicate, a pressed metal diaphragm, impermeable to gas but transmitting the voice. Newer improvements are embodied in a type with a universal size face piece, screw-type eye pieces and a sun-proof hose tube. Further experiments are being made toward the improvement of voice and vision transmission, particularly in an optical type mask designed to facilitate the use of field glasses.

Foresight in the procurement of materials vital in war has prompted the investigation in the field of substitutes for gas mask canister filling. The present standard filling is activated cocoanut carbon. Since the stoppage of some of our sources of cocoanut supply is a war possibility, a substitute for use in an emergency has been found in an activated coal carbon. This has been produced in a small scale experimental plant.

Protection of the skin of the soldier as well as of his lungs against chemical agents has also had the attention of the Service, Maj. Gen. Gilchrist reported. The possibility of a great advance over the cumbersome rubber clothing in use during the World war is seen in the satisfactory conduct of tests on the regular uniform treated with a protective impregnation. Research will delve deeper yet in the study of defense measures to be taken against chemical agents which may affect automotive and mechanized equipment. Just as the horse has been provided with a gas mask, his companions in transport, the truck and the tractor, may conceivably require protection against some ingenious chemical attack. Devices to protect ships, too, against chemical agents may be necessary, and this project has been undertaken by the Chemical Warfare Service at the request of the Navy Department.

The Chemical Warfare Service maintains one R. O. T. C. unit at the Massachusetts Institute of Technology, and holds an annual camp at Edgewood Arsenal, Md. Two hundred and ninety reserve officers were trained last year at the Arsenal and in other groups.

With these preparedness measures for national defense, the Chemical Warfare Service continues its collateral work on peace time problems. Recent prison breaks have shown the value of the tear gas bombs which the Service put forward as far back as 1920. It was prompt to investigate and report fully on conditions incident to the Cleveland Hospital X-ray disaster. It has made valuable experiments in preservative chemicals for pilings, posts and ship bottoms. Its work on boll weevil killing agents has been of economic importance. Also it has had a share in the development of ammonia and other masks, as well as in other means of protection against industrial poisoning.

In a recent mimic battle staged by the Army air corps above the city of Sacramento, California, an airplane equipped with smoke-laying apparatus flew above the city in a spiral course, spouting a dense cloud of chemicals from its tail. It was a bright, sunshiny day, but within a couple of minutes the city lay in the shadow of a thick cloud in an impressive demonstration of the speed and effectiveness of chemical defense.

It is to the achievements mentioned in the foregoing article and to others that the Chemical Warfare Service points as justifying its continual research to maintain chemical defense in peace or war.