Mechanics And Handicraft
Issue: Sep, 1936
Posted in: General
Tags: snow, weather
No Comments on Snow Storms Made to Order (Sep, 1936) 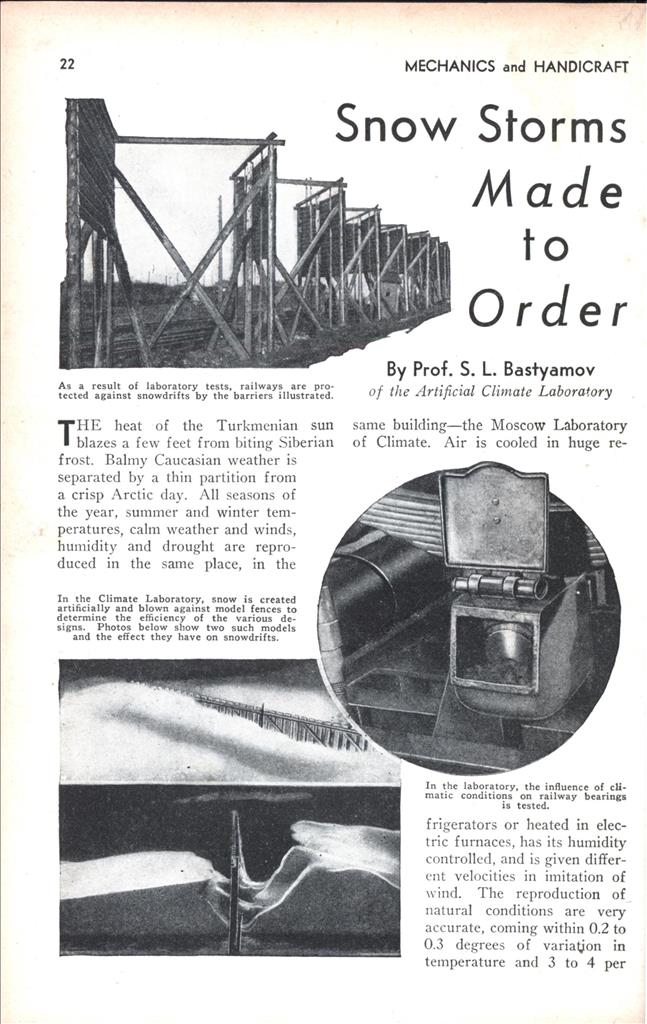 Snow Storms Made to Order

By Prof. S. L. Bastyamov
of the Artificial Climate Laboratory

THE heat of the Turkmenian sun blazes a few feet from biting Siberian frost. Balmy Caucasian weather is separated by a thin partition from a crisp Arctic day. All seasons of the year, summer and winter temperatures, calm weather and winds, humidity and drought are reproduced in the same place, in the same building—the Moscow Laboratory of Climate. Air is cooled in huge refrigerators or heated in electric furnaces, has its humidity controlled, and is given different velocities in imitation of wind. The reproduction of natural conditions are very accurate, coming within 0.2 to 0.3 degrees of variation in temperature and 3 to 4 per cent, in relative humidity of the air.

One problem studied is that of snow retention and protection of railroads against snow- drifts. This is done with an aerometeorological “test-tube,” in which are produced wind velocities identical with those actually observed in nature. The tube is long enough to permit study of the effect of fences and barriers on windblown snow over a considerable distance. The snow is blown at model fences and by comparing results, it is possible to determine the efficiency of various designs.

This research work-has led to the discovery of a new method of protection called “the active struggle against snow.” It was found that, if several raised barriers are placed on both sides of the railway road-bed, leaving a comparatively narrow opening between the top of the railway cut and the bottom of the barriers, and a current of wind and snow is blown through the opening, the wind (as tests have shown) will force the mass of snow out the railway cut.

This method is now in use on the railways of Siberia.

Determining the hardiness of various crops under conditions of frost, heat and drought is also a part of the investigation. With the laboratory’s “frost machine” it is possible to obtain, without leaving Moscow, a soil condition of heat and moisture which corresponds exactly to those at, let us say, Station Skovorod-niki on the Ussuriisk railway in the Far East.

Glazed frost and ice-crust on winter wheat is an extremely wide-spread phenomenon in the Ukraine; but up to now it has never been studied. Now the experimenter obtains ice-crusted wheat stalks for study, without waiting for weather conditions.

There is yet another original problem in which the Laboratory of Climate has done important work testing lubricants. At the laboratory is a railway car journal box inside which is mounted the greased end of the axle. The qualities of lubricating grease in different seasons of the year and in various geographical zones can be studied under every imaginable climatic condition, by recreating the awful cold of Siberia in the dead of winter or the tropical heat of Central Asia in July and August. Meanwhile, day and night, the axle rolls “on its way” To make such tests outside the laboratory would take at least a year’s time and many thousands of miles of traveling. In the Climate Laboratory, a type of grease is tested thoroughly in 15 days.

The control system is comparatively simple. By pressing the buttons on this board, corresponding heating, cooling, dampening and drying arrangements are put into operation on an extremely wide range.

By subjecting various kinds of fabrics to these tests, the Moscow Laboratory of Climate assists in creating the most convenient and appropriate clothing for all kinds of industrial conditions.

The laboratory also faces a number of new questions raised by problems of health protection and medical physiotherapy.