How can you not love an article with quotes like this:
“By the time you get down near Absolute Zero everything in the world is frozen harder than a pawnbroker’s heart…”

Actually things get MUCH weirder near absolute zero then they thought at the time. Check out these links for more. 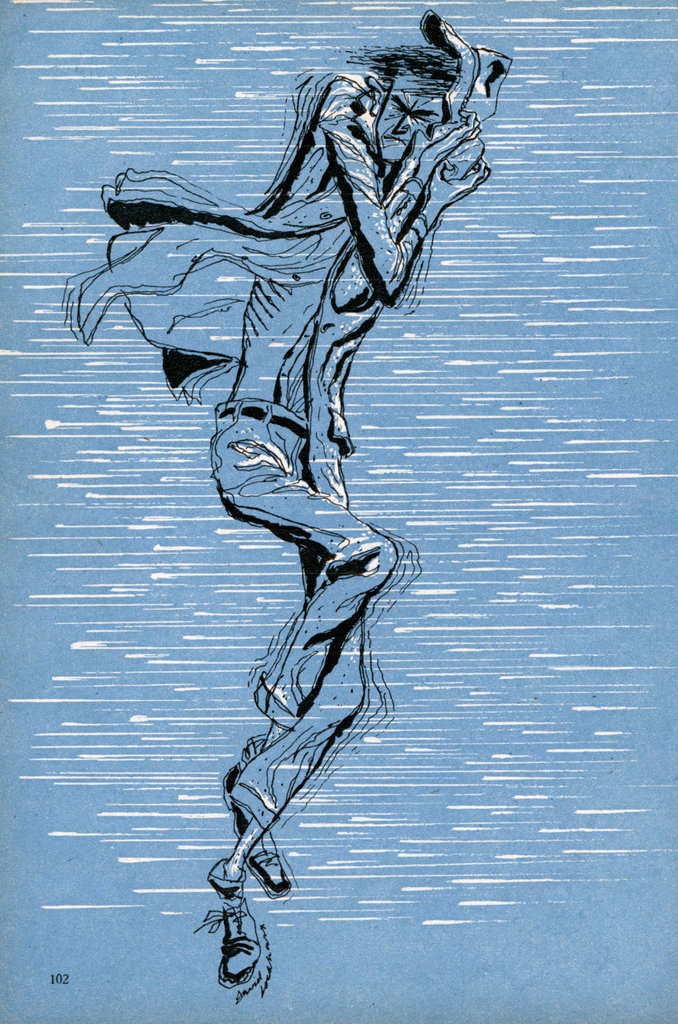 So You Think THIS Is Cold?

“Tis IS BITTER cold and I am sick at heart,” quoth Hamlet. And right now most citizens are hunching along, swaddled to the ears against the cold and muttering, “You said a mouthful, Bard.”

Is it cold enough for you?

As a matter of fact, it probably is cold enough for youâ€”whether you live in Weeping Water, Neb. or Hiram, Ga. One man’s heat wave is another man’s cold snap and a Key Wester can be just as uncomfortable at 40Â° F as a Bald Eagle, Minn, resident when the mercury goofs off toâ€”40 Â°F.

If you think it’s cold where you are, be glad you don’t dwell in the glorious villages of Omyakon and Verkhojansk in wildest Siberia. These garden spots hold the world’s record for low temperatures. Omyakon went to â€”93.5Â° F one winter and the Omyakoniks thought they were pretty cold potatoes until Verkhojansk spoiled their fun by posting a new low of â€”108 Â° F.

A recent visitor to Verkhojansk claims that come December, everything in Verkhojansk goes inside the hutsâ€” and he means everything, including people, pigs, oxen and reindeer. The men, being smarter than the animals, immediately begin hitting jugs of sapoi, a Siberian ‘shine reportedly made of old moss, scrapings from reindeer antlers and shredded copies of Izvestia, all mulched down with potato alcohol.

The male citizens of Verhojansk stay in a delightedly befogged alcoholic hibernation for the two coldest months, waited upon by their devoted and sober spouses. When March rolls around everyone gets shakily to his feet and it’s, “Come on, menâ€”let’s get out on those steppes!”

Siberia may be a mite chilly but parts of this country have nothing to be ashamed of. This deponent remembers a winter of his youth spent in northern Minnesota when the mercury hit â€”56Â° F. A lot of people say Minnesota gets a dry cold which isn’t as bad as, say, the wet cold of the Norfolk waterfront in January. But dry-shmy, I tell you it was cold, and things weren’t helped any when a playful comrade suggested I put my tongue against an iron post to see just how cold it was.

Alaska is probably the coldest spot under Old Glory. It once hit â€”81Â° F at a lonely little airport called Snag, in the Yukon.

But wherever you live, you’ll agree it gets cold. How do you stand it? Body heat to withstand cold is manufactured by all warm-blooded creatures like press agents and whales by a process much like combustion. The body takes carbon and hydrogen from food and unites it with oxygen taken in via respiration. If it is cold outside, the air touches the skin and takes heat away. The body attempts to keep up our inner temperature, but when the mercury drops we need warm clothes to help. If enough clothes aren’t available, the body sometimes fights a losing battle, particularly if the combustible material (food) or oxygen is lacking. If your body temperature drops about 30Â° below normal, you’ve had itâ€”usually. There was that case of a Chicago woman who was found frozen stiff in a snowdrift, her body temperature 34Â° below normal and her veins loaded with dram shop anti-freeze. She lived to be an exception to the rule. Don’t try it yourself. The symptoms of freezing are fairly easy to spot. First there is lividness of skin, followed by a dead-white pallor as blood vessels constrict and blood is forced away from the skin. Then an intense sleepiness comes with torpor of the entire muscular system. (Funny thing, but these charac teristicsâ€”pallor of skin and intense sleepinessâ€”are present in most of us in this office.)

The popular misconception is that the proper way to treat frost-bitten or frozen extremities is to massage them with snow. Try this with a properly frozen foot, for instance, and you’ll find yourself rolling around a handful of frozen toes like Birds-eye peas. Yep, they’ll snap right off. Never, but never, massage or rub frozen flesh. The idea is to warm frozen extremities slowly and gradually, either under covers or in tepid water.

Even if you were a Siberian sapoi-sipper and endured â€”100Â° weather every winter you still couldn’t impress the lads who’ve been doing some mighty wild things in low temperature research labs lately.

According to these physicists, it isn’t really cold until you get down around â€”459.6Â° F (â€”273.1Â° C) which is Absolute Zero. A nice, short definition of Absolute Zero is “the unattainable state of complete absence of heat.” Absolute Zero is a theoretical standard of cold that will never be reached. But the test-tube boys have come close to itâ€”within 1-1/2 thousandths of a degree to be exact.

Down in these frigid depths scientists, not content with Fahrenheit or Centigrade systems of measuring temperature, use “degrees Kelvin.” One degree Kelvin is about equal to â€”458Â° F. Degrees Kelvin are named for Sir William Thomson, 1st Baron Kelvin, a British scientist (1824-1907).

By the time you get down near Absolute Zero everything in the world is frozen harder than a pawnbroker’s heart except helium, that stuff they put in dirigibles. Helium is normally a gas but when it is cooled to 4.2Â° Kelvin it becomes a liquid.

Heat, according to the latest theories, is actually the violent agitation of molecules of matter. For instance, at 32 Â° F molecules of air move at 1,470 ft. per second. Because there are more molecules in a thimbleful of air than there are pigs in Secaucus, N. J., the molecules bump into each other. As a matter of fact, there are so many molecules that one only moves about l/277,000th of an inch before it hits another. Each molecule of air averages about 5,000,000,000 collisions a second, or considerably more than the Los Angeles Freeway.

However, as a material (gas, liquid or solid) is cooled, the molecular jig slows down. When it is cooled to three or four degrees Kelvin, the molecules are hardly moving at all and that’s when the lab boys can study them.

Are there any practical results from cooling things down so far? Dern tootin’. For instance, steel manufacturers have learned how to make an extremely hard stainless steel by dunking the molten metal in liquid nitrogen that’s been cooled to â€”320/ F before rolling it. Metals like that which can withstand extreme temperature changes will come in mighty handy when we get into outer space.

Supercooling has also resulted in a few things scientists can’t quite explain and which probably frighten them a little bit, if the truth be known. Helium gas liquefies at 4.2Â° Kelvin. It also boils at this point, â€”452 Â° F. Then, as it is cooled further to 2.2Â° Kelvin, it will flow up the inside of a glass against gravity.

Put a tube of emery powder in liquid helium, shine a 150-watt bulb on the tube and the helium will spurt up in a foot-high fountain. Why? No one knows.

And so the search for Absolute Zero continues with all sorts of strange by-products turning up. Ask a low temperature researcher why he wants to reach Absolute -Zero and he’ll probably take a leaf from the Mt. Everest legend and say, “Because it’s there.” Only, you see, Absolute Zero isn’t there.

After all this talk about degrees Kelvin and liquid helium and Absolute Zero, it’s kind of a relief to get back to my original question: “Is it cold enough for you?”

If you’re a real American your answer should be, “Hell, yes, it’s cold as a cucumber.” That’s the correct quotation, by the way, not “cool as a cucumber.” Two boys named Beaumont and Fletcher coined it back in 1600. They used it in a play called Cupid’s Revenge.