If you want to see one of these in action, just head over to London. 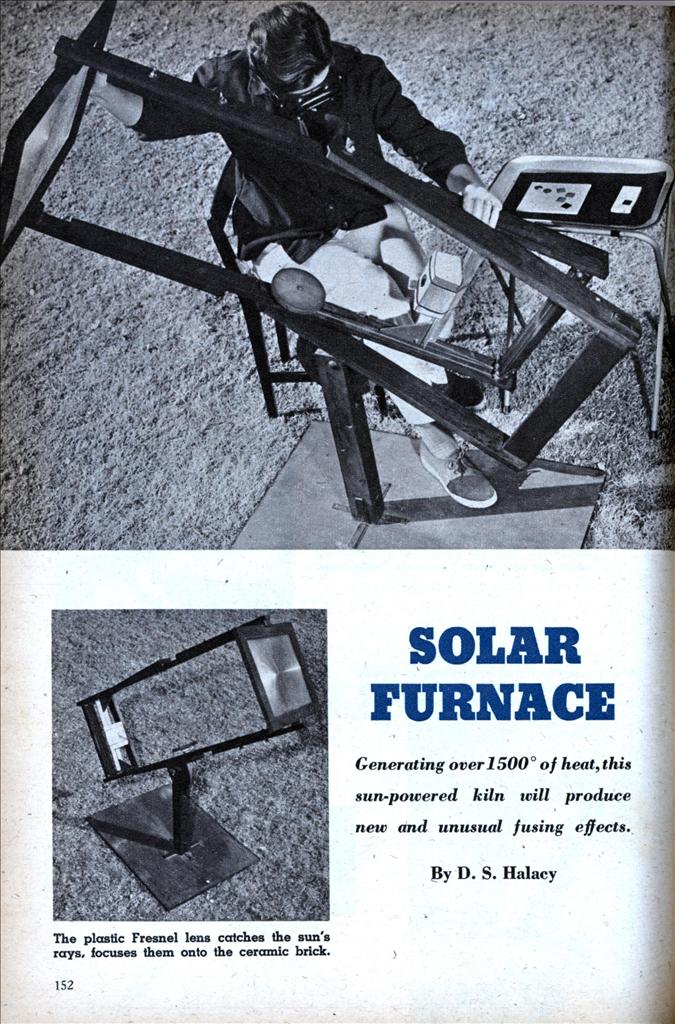 Generating over 1500° of heat, this sun-powered kiln will produce new and unusual fusing effects.

ONE of many unusual tasks the sun did at the recent Solar Symposium in Phoenix, Arizona, was the firing of enameled jewelry in a “solar kiln.” Far from being a mere stunt, the kiln turned out three hundred blue and gold enameled pins for the officials, and dozens of earrings, cuff-links, necklaces and other jewelry. Designed and made by the Phoenix Fine Arts Association, the jewelry, called “Solar Wrought,” brought fancy prices as something unique in jewelry. Yet the idea is simple enough that anyone can easily build his own kiln and fire similar items.

The kiln was created by scientist Paul Magill of the Stanford Research Institute, using a plastic Fresnel type lens. Used in optical and TV work, these lenses may be obtained from Eastman Kodak, or surplus houses such as Edmund Scientific Corp., Barrington, N. J., for about $3.50 each. With the lens fitted in a simple equatorial mounting of wood, and using a ceramic brick as an oven, the kiln is inexpensive and easy to make.

Despite its low cost, the kiln produces 1500° of heat at its focal point, sufficient to fuse the powdered or liquid enamel to the metal design. Since the solar kiln works by radiant heat, instead of air conduction as in a gas or electric type, the artist can obtain effects not usually possible.

Some enamel colors reflect radiant energy and thus fuse later than darker shades, giving unusual designs. Also, you can watch the fusing and can move the piece being fired to control fusing. Aside from these factors, use of the solar kiln is much the same as the conventional type.

For jewelry, copper is your best bet since it is inexpensive, non-rusting, easily formed and requires minimum processing. Twenty-gauge metal is used, being first cut to the shape desired and holes punched as necessary for fastenings. Next, the blank is coated with gum tragacanth, and enamel applied, either powdered or liquid; two or more colors may be used at a time, or one color may be fired, and others added and re-fired. With the lens focused properly, the piece is placed in the cavity of the ceramic brick and allowed to fuse. When the enameling is complete any clips, chains or other fastenings are soldered in place by the solar kiln. This is of course done at a lower temperature so as not to again fuse the enamel.

Frame sides are 3/4×3-in., 44-in. long. An end plate of the same material, 15-in. long, is fastened between them with wood screws. There are grooves cut from this end, a distance of 21-in. on the inner surface of the sides, to receive the adjustable runners. The focusing wheel has a five-inch diameter, with a two-inch shoulder for the cable. Dimensions given above are for a 36-inch focal length lens. Since the length of the side frame will depend on the focal length of the lens you are going to use, it is important to purchase the lens before any construction of the frame begins. Generally speaking, a shorter focal length will give you a smaller furnace and a greater concentration of heat, but less elbow room between the lens and the brick.

Two turns of cable are taken around the shoulder—the free ends run through the eyelets and around the pulley on the opposite side of the frame. Ends should be joined to form a continuous belt. Angle cross pieces are attached back to back on micarta runners, inserted in grooves, and cable attached. Turning of focusing wheel should move the assembly back and forth for positioning the ceramic brick which is attached with wire or cord.

Wood screws attach the lens mount to the frame and should be tight enough so lens will stay in position. For storage, it can be turned parallel to frame.

The yoke sides are 3/4x3x27-in. long. A cross piece of the same material is cut to the outside dimension of the frame, and screwed in place between the yoke sides. An 8-in. diameter semicircle is cut from 3/4-in. plywood, drilled for a 3/8-in. bolt, and attached with screws to the yoke side.

The base plate is plywood, 22×32-in. A post, 20-in. high, is laminated of 3/4×2-1/2-in. stock, leaving space for the yoke hinge to slide in. The post is screwed together and attached to the base with corner brackets, aligning the slot with the length of the base; bevel the corner for yoke clearance.

The frame assembly is attached to the yoke with two 3/8-in. bolts, using wing nuts to tighten. Then the yoke is inserted in the post, lens toward the near edge of the base, again using a 3/8-in. bolt and wing nut; these should be tightened so parts remain in adjustment. The whole assembly should be painted.

To use the kiln, the base is oriented with its long axis north and south, yoke towards north. Tilt the yoke so that the lens catches the sun’s rays, and tighten wing nut. Now, with the lens perpendicular to the frame swing frame in yoke to position the focal point on the ceramic brick, which is moved up or down as needed with focusing wheel.

Welding-type goggles are used to see the fusing action in the intense light. With the focal point on the brick, the jewelry is placed in the depression, and firing is done. The sun will not move enough during firing to make it necessary to adjust the lens.