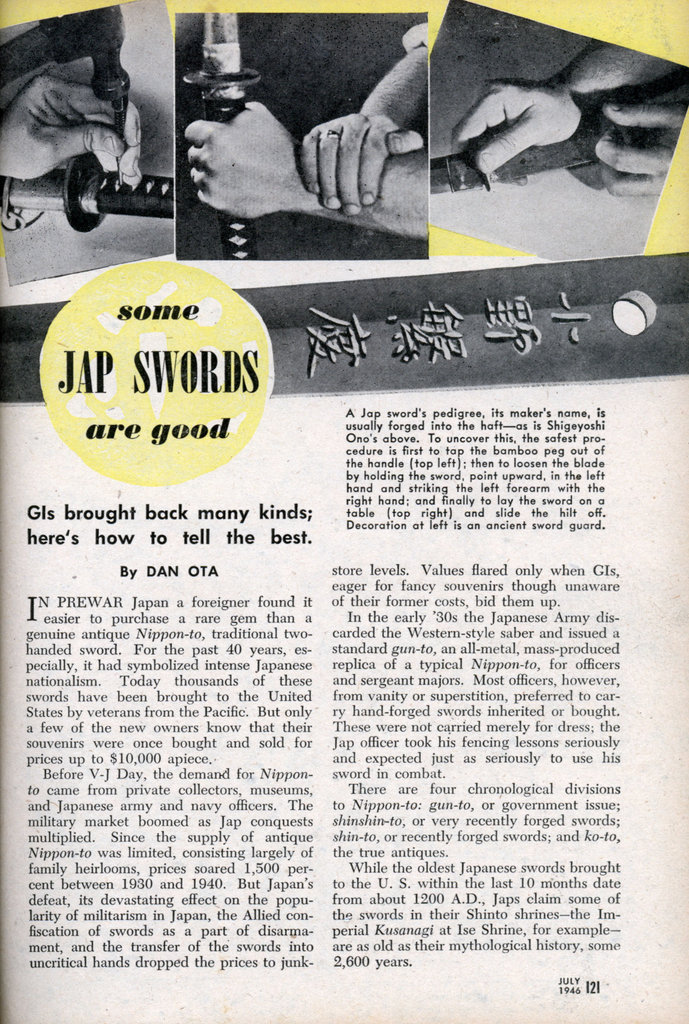 Some JAP SWORDS are Good

GIs brought back many kinds; here’s how to tell the best

IN PREWAR Japan a foreigner found it easier to purchase a rare gem than a genuine antique Nippon-to, traditional two-handed sword. For the past 40 years, especially, it had symbolized intense Japanese nationalism. Today thousands of these swords have been brought to the United States by veterans from the Pacific. But only a few of the new owners know that their souvenirs were once bought and sold for prices up to $10,000 apiece.

Before V-J Day, the demand for Nippon-to came from private collectors, museums, and Japanese army and navy officers. The military market boomed as Jap conquests multiplied. Since the supply of antique Nippon-to was limited, consisting largely of family heirlooms, prices soared 1,500 percent between 1930 and 1940. But Japan’s defeat, its devastating effect on the popularity of militarism in Japan, the Allied confiscation of swords as a part of disarmament, and the transfer of the swords into uncritical hands dropped the prices to junkstore levels. Values flared only when GIs, eager for fancy souvenirs though unaware of their former costs, bid them up.

In the early ’30s the Japanese Army discarded the Western-style saber and issued a standard gun-to, an all-metal, mass-produced replica of a typical Nippon-to, for officers and sergeant majors. Most officers, however, from vanity or superstition, preferred to carry hand-forged swords inherited or bought. These were not carried merely for dress; the Jap officer took his fencing lessons seriously and expected just as seriously to use his sword in combat.

While the oldest Japanese swords brought to the U. S. within the last 10 months date from about 1200 A.D., Japs claim some of the swords in their Shinto shrinesâ€”the Imperial Kusanagi at Ise Shrine, for example-are as old as their mythological history, some 2,600 years.

Every school of swordmaking guarded its own formula and technique. Shinshin-to schools emphasized quantity rather than quality. But shin-to and ko-to blades were (made with great skill and extremely painstaking labor. Steel totaling four or five times the bulk of the finished blade was heated and hammered thin, folded into itself, then again heated and flattened. This refining process was repeated about 15 times, with charcoal made of straws for a reducing agent. Frequently several blocks of steel of different grades were treated and finally combined to make a single blade.

Swordsmiths stressed “the development of the blade’s soul,” which meant the observance of certain rituals while the sword was being forged. A prayer mumbled with each stroke on the anvil was believed to have a spiritual effect on the steel.

After the steel had taken shape, it was partially coated with layers of fine clay, heated, and dipped in warm water. This final process tempered the cutting edge, which had been left uncoated. The wavy line effect seen on many old blades was the visible result of this artistic clay-coating. Finally the blade was sharpened and polished by hand, a month’s job for an expert using varying grades of soapstones and fine talcum powder. An orthodox Jap would never use oil in caring for his sword or touch the steel with his fingers; nor would he sharpen it more than once in a lifetime. His mouth was stuffed with a rag so that his breath wouldn’t tarnish the polish.